Thinking up complicated deathtraps to use against the Batman.

Prove to Gotham that he is smarter than everyone (main objective).

Get his vengeance on Batman and his allies for outsmarting him.
Manipulating Gotham's Underworld into doing his bidding (all failed).

Edward Nygma, also known as The Riddler and Hush, is the titular main antagonist of the DC Animated film, Batman: Hush. He is a supervillain and a frequent enemy of Batman whose narcissistic need for attention leads him to strongly desire to prove himself to be the intellectual superior of Gotham's underworld and even Batman himself.

He is voiced by Geoffrey Arend and by Maury Sterling while playing as Hush.

At some point prior to the film, the Riddler was diagnosed with brain cancer and, using the alias of Arthur Wynne, enlisted the help of renowned neurosurgeon Thomas Elliot, a close friend of Bruce Wayne, to help him. However, Elliot failed to remove his tumor, embittering Riddler against him. Afterwards, Riddler is forced to bribe his way into using one of the Lazarus Pits to heal his cancer, and after using it, he had an epiphany and finally deduced that Batman's secret identity is Bruce Wayne. As a side effect, he has also developed enhanced physical abilities due to exposure to the Lazarus Pit and his pupils had become red.

Due to his lack of respect amongst the other supervillains within the Gotham underworld, The Riddler takes on a new persona known as Hush. As Hush, Riddler manipulates Catwoman, Poison Ivy, Bane, Harley Quinn, Joker, and Scarecrow in plots to kill Batman, while using Clayface as a double of himself that gets incarcerated in Arkham.

After all of the villains fail against Batman, Riddler kidnaps Catwoman and holds her hostage in an abandoned factory to lure Batman to him. Batman puts up a much better fight than Riddler because the Riddler still talks too much and lacks the decades of hand-to-hand combat. Batman taunts and calls him out on being the same C-Lister villain and still being a joke of the Gotham underworld. Batman threatens Riddler that once the other villains find out that he was Hush the whole time, they'll kill him and tells him that the effects of the Lazarus pit don't last forever because his strength and genius are fading away. Angered by this, Riddler finally overpowers and nearly kills Batman, but he is stopped by a freed Catwoman.

The two of them then overwhelm the Riddler and push him over a vat of molten metal. Batman attempts to save the Riddler, endangering his own life in the process, but Catwoman cuts the rope holding the Riddler up, causing the villain to fall to his death.

As a side-effect of him using a Lazarus Pit to regenerate from his brain cancer, the Riddler develops enhanced durability, speed and strength. He was able to go toe-to-toe with Batman and even overwhelm him in terms of physical might. However, the only thing he lacked was the decades of hand-to-hand combat that Batman and Catwoman have despite being skilled in many other areas. He was even able to wield his new Riddler Staff with remarkable proficiency and even moderately wounded Batman three times. He would've killed Batman if not for Catwoman's intervention. However, during the showdown, his enhanced durability, speed and strength began to fade away as pointed out by Batman that the effects of the Lazarus Pit don't last forever.

The Riddler possess an extraordinary genius-level intellect with a highly logical mind and an aptitude for solving puzzles at remarkable speeds. While under the Lazarus Pit's effects, his intellect was momentarily boosted and he was able to finally deduce Batman's secret identity as Bruce Wayne. He was also a skilled manipulator, as he manipulated many of Gotham's notorious super villains into doing his bidding as Hush since no one would respect him or fear him as the Riddler. This includes the Joker who like his comic counterpart, is one of the most cunning of all of Batman's foes. However, during the showdown, his enhanced intelligence began to fade away as pointed out by Batman that the effects of the Lazarus Pit don't last forever. 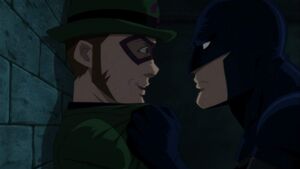 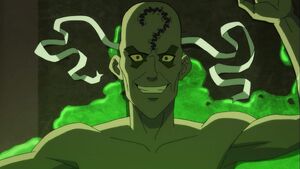 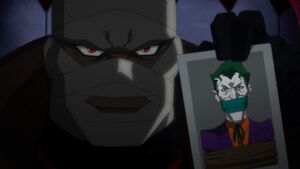 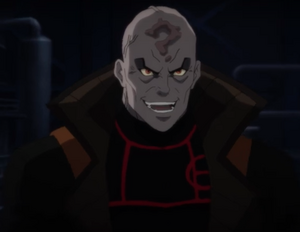 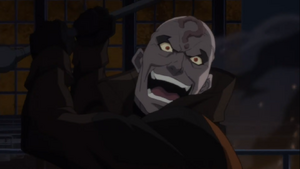 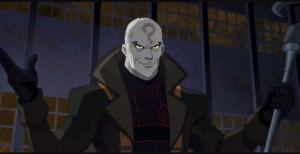 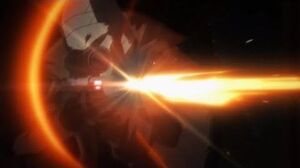 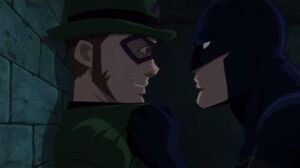 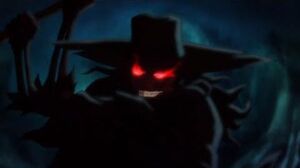 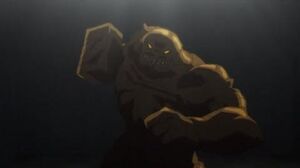 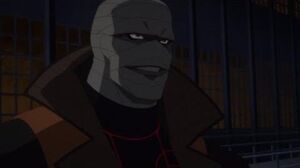 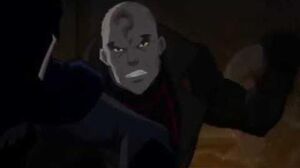 Retrieved from "https://villains.fandom.com/wiki/Riddler_(DC_Animated_Movie_Universe)?oldid=4151789"
Community content is available under CC-BY-SA unless otherwise noted.