Take over Gotham (both failed)

He is voiced by Jim Rash, who also played Stitches in Sky High.

Riddler instantly found goods rebelling against him of his own, that forced him to make general interest with the remnants of the Legion of Doom and shaping the Injustice League so that can help them all get back their goons and shape Gotham for themselves. He made a agreement with Bane that the need for goons was pressing and saying that "if everyone's a villain, then no one is".

When Riddler was at the first Injustice League meeting with  Harley, he just made fun of her as the reason why they banded together. He also mocked and made fun of Bane's complaints about being in a folding chair, saying that it was a joke at his expense. Harley said that she would receive the "bad part" of new Gotham once divided into territories and he mocked her. Harley declined  the idea,  so Mr. Freeze froze her up into a big block of ice. The Injustice League the Riddler argue to end Harley's life at this point, but Mr. Freeze satisfy them to keep  Harley as a trophy instead, sparing her life, so the Riddler simply makes fun of Harley within her ice block.

Riddler is a bald headed man who has a question mark tattoo on his forehead. He most times brings a staff shaped like question mark with him. He wears a green overcoat that has question on it, purple gloves and a black shirt with a purple tie.

During Dye Hard, constant running in the Hamster Wheel has made him muscular. 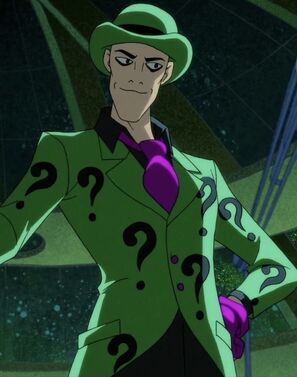 Riddler with his hat on 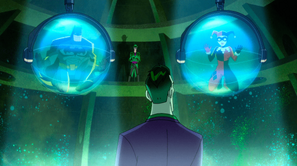 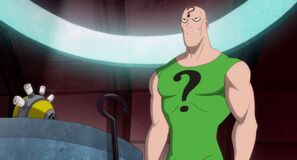 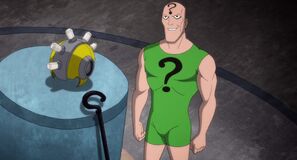 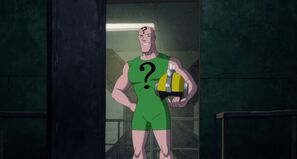 Retrieved from "https://villains.fandom.com/wiki/Riddler_(Harley_Quinn_TV_Series)?oldid=3925819"
Community content is available under CC-BY-SA unless otherwise noted.