The Ridgeback Monster, real name Marino, is a former Indian Hill experiment and a minor villain in the third season of Gotham.

He was portrayed by Michael Montgomery.

The Ridgeback Monster is one of the escaped experiments from Indian Hill created by Hugo Strange. As the others, he is releases when Fish Mooney's truck crashes in Gotham City.

Six months after the crash, he robs a pharmacy at night and is surprised by the owner. The frightened man claims that he will not call the police if the monster leaves immediately but the monster grabs the man and throws him through the shop's window. He follows him onto the street but is then greeted by Jim Gordon, who holds a baton and tells him to come quietly. The monster instead grabs and breaks the baton and attacks Gordon, who attempts to fight back. Although he can hold his ground, Gordon is unable to really harm the monster due to the man's hardened skin and the fight only ends when the monster is accidentally run over by a truck.

In the aftermath, GCPD Commisioner Barnes holds a press conference in which he informs Gotham about the monster. Barnes claims that his men are still collecting and try to arrest all the Indian Hill inmates. 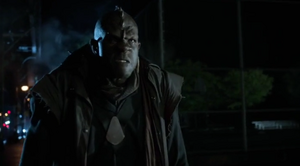 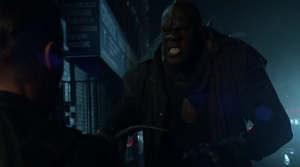