Swiping with its claws
Firing lasers

Ridley Robot, also known as Mecha Ridley, is an unfinished robot build by Ridley, made to look identical to its creator, serving as the final boss of Metroid: Zero Mission.

Through the heavy weaponry of missiles and super missiles, Samus eventually defeats and destroys Mecha Ridley. However, as a last resort, the machine tries to take Samus with it by setting a self-destruction timer (7, 5, or 3 minutes depending on the difficulty level) for the Mothership and locks all exits out of the ship, but Samus flees in a Space Pirate ship just in time to avoid the explosion.

In Super Smash Bros. Ultimate, one of the color changes for Ridley's alternate costume as Meta Ridley has a gray skin coloring with neon green wings and red markings at his feet, resembling Mecha Ridley.

Mecha Ridley itself appears in the game as a primary shield-type spirit. When equipped, it grants three slots for support spirits, but it starts each battle with the fighter at 30% damage. Its Spirit Battle is a Stamina Battle against a Giant Ridley on the Omega form of Norfair, who has additional power to his smash attacks, but has a very slow movement speed.

Mecha Ridley resembles a metallic gray version of its creator, with gray eyes and a red core on its chest, the latter of which is also its weak spot. Because it lacks legs and wings, Mecha Ridley moves about by crawling on its arms. In the place of its missing appendages are multiple cables attached to an unseen interface, giving it either power, control over the mothership, or both. 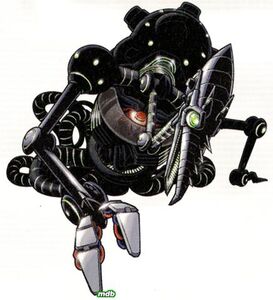 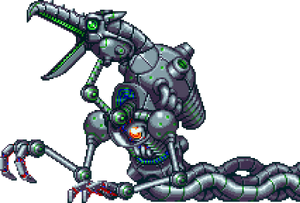 Retrieved from "https://villains.fandom.com/wiki/Ridley_Robot?oldid=3552543"
Community content is available under CC-BY-SA unless otherwise noted.