Own the best circus in the space (succeeded).

Prevent Rayman and his friends from escaping from his circus (failed).
Get his revenge on Rayman (failed).
Quit his job after going out of business (succeeded).

Tyrannical Ringmaster
Rigatoni (formerly also spelled Regatoni) is an antagonist in Rayman: The Animated Series, which only appears in the first episode Lac-Mac Napping. He is the manipulative master of ceremonies of an intergalactic circus ringmaster that travels through different cities, countries and planets. His assisant, the Admiral Razorbeard, captures strange creatures who are then forced to work as slaves in the circus.

He was voiced by Danny Mann.

Rigatoni is tyrannical, oppressive, blasphemous, authoritarian and dictatorial. He is a very greedy, arrogant, possessive, materialistic and manipulative businessman who treats his slaves very badly. As the name suggests, he is a type of Italian Ringmaster, despite his Brooklyn accent. His circus has a large CCTV system because he is afraid his slaves will be able to escape or be stolen, especially his favorite creature, Lac-Mac. One of his most fraudulent and treacherous plans is when he successfully owns the best circus of space. It may be presumed that he went out of business since Rayman and the other creatures escaped.

When Rayman and his friends escape from the circus, Rigatoni hires Inspector "Archie" Grub to capture them and return them to him. Rigatoni also says he will have a revenge on Rayman. This is his first and last appearance in the series since it was canceled. 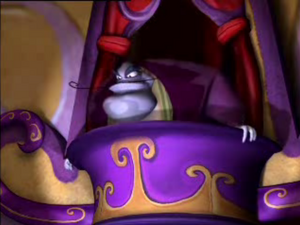 Rigatoni on the balcony overlooking the track of his tent. 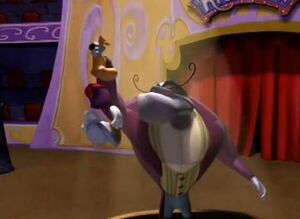 Rigatoni catch Rayman to force to obey him.
Add a photo to this gallery

Retrieved from "https://villains.fandom.com/wiki/Rigatoni?oldid=3790898"
Community content is available under CC-BY-SA unless otherwise noted.