The One Cheek Wonder

Slacking off with Mordecai.

Get revenge on Mordecai, Benson, Muscle Man and several others (only if they disagree on what he's saying or teasing him).

Various goals depending on the episode.
Graduate from High-School (succeeded)

Rigby is one of the two main protagonists (alongside Mordecai) of Regular Show. Rigby is a 23-year-old raccoon. He made his debut in the original Pilot episode working as a groundskeeper of the park.

Despite being a protagonist character alongside Mordecai, Rigby isn't really a villian at all in the series but he has done many villainous deeds that are unacceptable, but he has done things to fix his mistakes as well. As the series progressed, Rigby has gotten less and less antagonistic and has become more of a true friend and has even become a loving and devoted boyfriend and future husband to Eileen. Eventfully, he matures to the point where he retains little, if any of his more antagonistic traits. Some fans even started liking him more than Mordecai.

He was voiced by William Salyers, who also voiced Erich Soders from HITMAN. 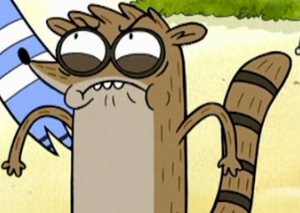 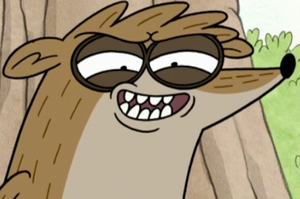 Rigby's Evil Grin for having a idea how to eradicate the evil sausages with mustard. 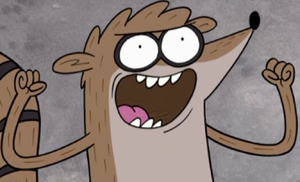 Rigby's Evil Laugh for he got rid of a tape with a annoying music.

Rigby taking matters with death punch of every person who punched him.

Rigby punched by Mordecai through a box. 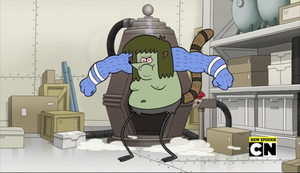 Rigby as a monstrous hybrid of Mordecai and Muscle Man.
Add a photo to this gallery 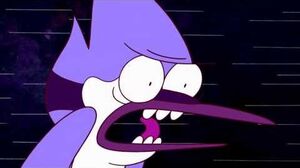 Regular Show - I'LL KILL YOU!
Add a photo to this gallery

Retrieved from "https://villains.fandom.com/wiki/Rigby_(Regular_Show)?oldid=4004276"
Community content is available under CC-BY-SA unless otherwise noted.