Advance the interests of the Toppat Clan.

Launch a rocket to create an orbital station from which the Toppats can commit crimes across the world without government interference.
Kill Henry Stickmin and Ellie Rose (all determinant).

The Right Hand Man is a major antagonist in the Henry Stickmin series and a member of the notorious Toppat Clan.

He is a Cockney high-ranking member of the Toppat Clan and also Reginald Copperbottom's second-in-command, and is extremely loyal to the Toppat Clan. The Right Hand Man is also the optional archenemy of the titular protagonist, Henry Stickmin. Despite not being the leader, he's way stronger and braver then Reginald, almost never showing any fear.

In two endings of Infiltraiting the Airship, he gets defeated and left in a bad shape. Some endings in Completing the Mission follow those endings. In these endings, then he becomes a cyborg, presumably by Dr. Vinschpinsilstien, called the Right Hand Man Reborn.

According to his bio, nobody knows his real name.

He was voiced by Marcus Brosmander in all of his appearances.

The Right Hand Man wears a top hat, just like any other Toppat member. He sports black shoes, and a neon-red mustache. In the remaster, his mustache is eventually turned into a natural orange color, which suggests that he didn't dye it, unlike the alternate unnatural red. He is seen having a bat and a pistol for his weapons.

In all pathways that use "Rapidly Promoted Executive" or "Relentless Bounty Hunter" as a starting point, the Right Hand Man has been turned into a cyborg following his defeat at Henry's hands, now called the Right Hand Man Reborn. Half of his skull is now metal, with a robotic eye that can shoot lasers. He is also able to transmute his limbs into whatever is suited to his needs of the situation, such as turning his legs into jet propellers and his right arm into a sword or blasters.

The Right Hand Man is extremely loyal towards the Toppat Clan, no matter what. He is also extremely brave, barely batting an eye when Henry crashes through the window when the player chooses the Cannonball option. If the player follows from the Relentless Bounty Hunter or Rapidly Promoted Executive endings, the Right Hand Man Reborn is vengeful towards Henry, though if Henry helps the Toppat Clan establish their orbital station, he puts aside his grudge and accepts Henry as leader. He also shows a bit of sadism at certain points. 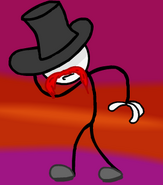 The RHM in an EarthBound/Mother style fight.

The Right Hand Man without hat