Rigor Mortex is a superboss in Dragon Quest Monsters Joker 2 and the source of most of the conflicts that torment the inhabitants of The Island.

It was the creation of a madman named Zelham as an attempt to gain control of The Island from the tribe he rivaled, who had Leonyx as their leader. While it managed to corrupt Leonyx's soul, the machine also consumed its creator. Leonyx managed to save his heart by turning it into a Sanguini and sending it away, but his soul was still posessed.

Rigor Mortex is a three-spaced giant monster and easily the hardest boss in the game. It's also the most complicated to synthesize as it requires a Leonyx and a Zenith Dragon, both of which require monsters that at one point required a Captain Crow. Since there's only one Captain Crow per game, it's impossible to get with just one game card.

In Dragon Quest Monster Super Light, Rigor Mortex reappears as the main antagonist of the first two arcs of the game, it is responsible for driving the monsters hostile. It hides behind the Ancient Seat. Rigor Mortex is eventually confronted by the hero and his/her monsters, and the mysterious machine said that it want to 'become one' with the hero and fight him/her, Rigor Mortex is eventually defeated and fell into the hole behind it, which lead to the underworld. Rigor Mortex escapes to the Forbidden Door and drove the monsters their hostile as well. Atbthe Forbidden Door, Rigor Mortex once again confronted the hero and absorbed the power of Dread Realm, transforming into a giant humanoid creature, now saying that it wanted to completely destroy all worlds, Rigor Mortex attacked the hero and triggers the final boss battle, in the end, Rigor Mortex is defeated, with its last bit of strength, the evil machine tried to destroy the world along with itself, however Warubou sacrifice himself to seal away Rigor Mortex once and for all by dragging it into the Dread Realm, thus ending his goal for good. 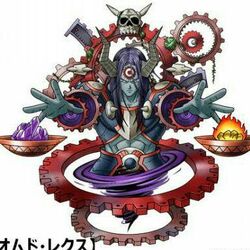 Rigor Mortex's second form
Add a photo to this gallery

Retrieved from "https://villains.fandom.com/wiki/Rigor_Mortex?oldid=3901179"
Community content is available under CC-BY-SA unless otherwise noted.