Return to the Rikti home-world (Traditionalists).

The Rikti are a central villain group from the M.M.O. City of Heroes. The Rikti were designed to evoke the theme of an alien invasion. They have massive flying war ships, advanced energy weapons and controlled radiation impulses. The Rikti truly appeared in 2007 and remained a constant threat, routinely invading zones with an attempt to destroy Earth's civilization. Though the initial invasion force was cut-off and stranded on Earth, the highly fortified mother-ship remained and was constantly attempting to conquer the planet from it's crashed-yet secure location in the White Plains, which from that day came to be known as The Rikti War Zone.

The Rikti first arrived in 2004, used as a beta test for City of Heroes, presented as a hostile alien race. Developers used the enigmatic invaders to test powers, A.I. reaction time and give their players a chance to unite against a common foe. The Rikti left as mysteriously as they came with assurances that what the heroes had fought was only a scout force. In 2007 the game's tenth issue was released and with it the Rikti returned, this time in a formal invasion force. The skies turned green from radiation, massive air-born warships the size of buildings appeared in the sky and glowing portals beamed down cybernetic enhanced creatures with elongated heads who carried energy weapons. Paragon City, Rhode Island USA, was the site of the invasion force. Paragon City had drawn in various meta-humans since the 1940s, when signature super-heroes, Statesman and Sister Psyche'  came back from World War II, having helped win the War and won fame for their fair city. No one was sure if the Rikti just happened to invade Paragon first through shear chance or if they had tactically decided that dealing with the largest concentration of meta-humans first was a priority but either way, Paragon City became ground zero for what seemed like a nightmarish start to an alien invasion.

Statesman and Sister Psyche' were still active heroes (Statesman being nigh-immortal and Sister Psyche' having spent a few decades in someone else's body, her own not aging while she was parted from it). They rallied the heroes of Paragon and many others beyond. Hero-1 had also helped in World War II, (nigh-immortal like Statesman) but had been living in his home in England, however when the Rikti invaded he flew to the U.S. to help turn back the menace and come to fight side-by-side with the two American super-heroes once again in their hour of need. The first real turning point came due to a mistake the Rikti made - The Rikti had dug down deep into the areas around Paragon to use as bunkers to launch ground and subterranean attacks while their ships kept bombarding the city. While in the tunnels the Rikti ran into a group of magi called, The Circle of Thorns. The Circle of Thorns was a group thought to have disappeared in the 1960s but as it turned out had just been spiriting their sacrifices off to their massive underground city rather than killing them on street-level. The Rikti of-course tried to exterminate the Circle of Thorns but were driven back by a strange force which did not exist on their home world, a force called "magic". The Circle were no friends of the people of Paragon and, with their re-discovery, new efforts would be made later to defeat them, but their involvement in the Rikti War would be the first major turning point in the war and give the Heroes of Paragon City a lull in the assault to develop a counter-attack. Statesman and his local allies formed what was to be called "Alpha Team", and Hero-1 formed what would be called the "Omega Team". While Alpha team prioritized creating a diversion attack-force, Omega team snuck into the portal to the Rikt home-world and destroyed it from the inside.

The Omega team were presumed dead but their sacrifice cut-off the initial Rikti invasion force from their home-world. Without the home-world to keep sending more troops, the Rikti forces became finite and were eventually defeated. The Rikti mother-ship would crash in the White-Plain neighborhood. Various militaries formed a new defense force called The Vanguard and, with the various super-scientists making-up Paragon City at that point, the Vanguard became a force of elite military units with cutting edge technology and research, able to keep the Rikti largely trapped in the White Plains, which promptly became re-dubbed, The Rikti War Zone.

The Rikti military commander Lord of War: Hro'Dtohz, had no intention of giving-up entirely. As the mother-ship was grounded Hro'Dtohz had his security chief U'Kon Gr'ai divert all attack and propulsion power to the shields and life-support systems to keep the Vanguard from finishing them off. Hro'Dtohz could use an emergency broadcasting to the home-world but considered it a disgrace until victory was again under-way. Without the home-world though and the mother-ship grounded Hro'Dtohz needed support to renew his efforts. Two people made contact with Hro'Dtohz, one was a Mysterious Sponsor, who had given the Rikti the lay-out of Earth, the other was the leader of the Rogue Isles, Lord Recluse. Both contacts were established as super-villains with grudges against the Heroes of Paragon City and so both wished for the Rikti to renew their invasion, however each had different resources and working conditions. As neither the sponsor nor Lord Recluse seemed to know about the other, Hro'Dtohz used the opportunity to shop-around between the two so as not to be put into a weak negotiating situation.

The sponsor did not wish to meet in-person, instead speaking via garbled communications. He/she/it was stationed in Paragon City and had enough spies and wealth to influence nearly all of Paragon City's underworld without most parties even knowing about the network. The Sponsor would help transport the Rikti, hollow out buildings for them and organize trade programs between the Rikti and one of it's subsidiaries, Crey Industries - an obscenely influential pharmaceutical and manufacturing company. The mysterious sponsor said the Rikti renewing their invasion would only help his network flourish with the heroes of Paragon distracted so it was a mutual beneficial arrangement, never the less, Hro'Dtohz did not trust the unprovoked altruistic earthling, while he did cooperate, the Lord of War always kept wary of the arrangement.

Lord Recluse was far more candid. The man ruled an island nation that was to super-villains what Paragon was to super-heroes. Lord Recluse would mass-produce the Rikti's weaponry for them, but it was understood that examining the equipment would allow Arachnos, Lord Recluse's military/government, to use the same designs for their own purposes. Unlike the U.S. government, Arachnos's entire military was as well equipped as the Vanguard and trading with them would only increase their technology making them a bigger threat, thus Hro'Dtohz had similar concerns about dealing with Lord Recluse as he had his sponsor; This would be changed when Hro'Dtohz found out Lord Recluse was a devout Darwinist - in that he considered being wiped out by the Rikti acceptable if they ever became strong enough to actually accomplish that; Hro'Dtohz shared the same philosophy for the Rikti, thus a far more amicable accord was struck between the Rikti and Arachnos. Hro'Dtohz dispatched Ambassador Kuhr'Rekt to the Rogue Isles' capital of Grandville to discuss terms with Arachnos. The deal would be that Arachnos would have it's lead scientist, Doctor Aeon, rebuild all the Rikti technology for them, with the understanding he would integrate the technology into Arachnos's machines eventually as well. Arachnos would also schedule routine times when it's military would not fire on the Rikti invasion force - for a few hours every few days, Arachnos would not fire any shots at Rikti ships and allow them to invade, but the Rikti had to agree that once the designated time was up they would willingly retreat if they were unable to conquer the Rogue Isles within that time-frame - both Hro'Dtohz and Lord Recluse accepted such a contest as an honorable match of testing for supremacy. The Rikti never were able to fight off the hoards of non-Arachnos-affiliated super-villains roaming the streets - leading the Rikti to earn a tempered respect for Arachnos as both allies and potential foes.

The Rikti have a similar accord with Crey Industries thanks to the mysterious sponsor, however with their sponsor's help the Rikti were able to plant genetically altered Rikti soldiers as spies in the company - similar tactics having been useless against Arachnos thanks to the psychic monitoring of it's Seer Network. Crey Industries are only helping with Rikti production to turn the technology into profit where as Arachnos is strengthening it's military; Arachnos have much greater demands but a shared ideology and the Crey are far easier to trick but can not offer anything beyond immediate trade and so the Rikti sway between each for rebuilding their forces. Countess Crey frequently offers more and more production for more and more Rikti devices, but Ambassador Kuhr'Rekt continues to speak highly of the Rikti-like 'honor' of Arachnos. According to Ambassador Kuhr'Rekt Hro'Dtohz intends to offer Arachnos amnesty if the Rikti are able to conquer earth.

The Lineage of War

The Rikti's invasion force is made up of "the Lineage of War". The Rikti have different directives in their society for nearly every function therein. The Lineage of War were constructed for the invasion of other planets and Hro'Dhotz is officially it's high commander. However even within the Lineage there are two sub-factions, the Rikti Traditionalists and the Rikti Restructurists.

Most of the Rikti are Traditionalists. The Rikti Traditionalists believe that the Lineage of War, must only be called upon for major operations or in times of war. The Traditionalists are mainly concerned with returning to the Rikti home-world, they consider the conflict over and only wish to get the mother-ship up and running to make the journey home. Nearly all Rikti have personal teleporters that they can use to return to their home-world, but using them to return without official clearance is considered desertion and so none may leave until either the mother-ship is reactivated or the Earth is conquered, lest they face a dishonorable-discharge. A few Traditionalists are even pressing for their commanders to strike a peace-accord with the Earthlings to help them return home in exchange for no further violence.

The Rikti Restructurists are smaller in numbers than the Traditionalists, but most are in much greater positions of influence. The Rikti Restructurists want the Rikti military to run Rikti society, wishing for a military state. Though the Lineage of War is firmly in-charge during the invasion, when it is done, the Rikti war-commanders stand to lose their influence. The Restructurists have no desire for retreat or peace, they see conquering Earth as an opportunity for colossal prestige when they return home and so they are constantly looking for ways to finish the job. The Restructurists have no interests in peace-accords with Earthlings, outside of perhaps Arachnos. Though firmly in-charge the Restructurists have major morale issues and so must tolerate the Traditionalists, even as they shoot down their pleas for retreat. 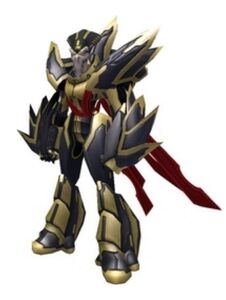 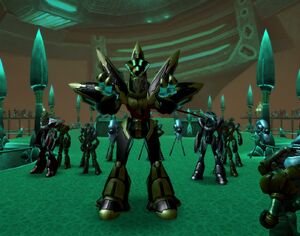 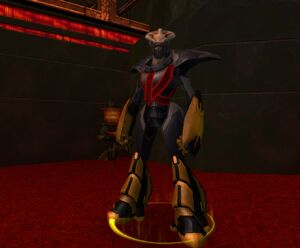 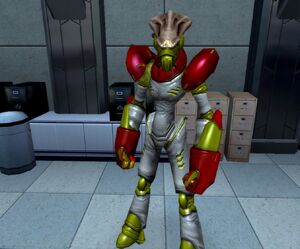 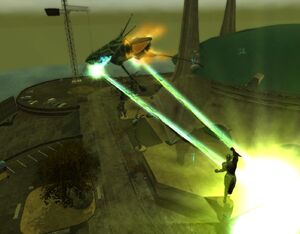 One of the Rikti ships during a Rikti raid.
Add a photo to this gallery
Retrieved from "https://villains.fandom.com/wiki/Rikti?oldid=3161588"
Community content is available under CC-BY-SA unless otherwise noted.