Villains Wiki
Register
Don't have an account?
Sign In
Advertisement
in: Female, Fast and the Furious Villains, Action Movie Villains,
and 30 more

Aiding her boyfriend Owen Shaw in his goals.

Feed information to her boyfriend Owen Shaw about the operation of Dom's crew (succeeded).

Riley Hicks is the secondary antagonist in Fast & Furious 6, the sixth instalment of The Fast & Furious Franchise. She initially appeared as the right-hand subordinate of DSS operative Luke Hobbs, but was eventually revealed to be the personal informant of former Special Air Service soldier Major Owen G. Shaw.

She was portrayed by Gina Carano, who also played Angel Dust in Deadpool.

Early in her youth, Riley received top of her class in the Federal Law Enforcement Training Centers before joining Diplomatic Security Service as a field agent. According to Hobbs, she served in Cairo and Tunis while stating that she was the youngest Regional Security Officer ever in Afghanistan.

At some point, she had a romantic relationship with Owen Shaw and presumably becoming his informant inside the U.S. federal agency.

She is introduced as a DSS agent that works with Agent Luke Hobbs, Dominic Toretto and their crewmates. At one point, she is seen having a fight with Letty after members of Shaw's team ambush Gisele's and her's interrogation. She goes with Hobbs when he and Dominic's team stop the attempt of stealing the tank and its associated computer chip.

When Shaw is captured as a result of the tank operation, Hobbs leads Shaw in front of Dominic's crew, where Shaw reveals that he has kidnapped Mia. Shaw then requests his release in return for Mia, which the crew is forced to reluctantly oblige to. As Shaw begins leaving the base, he seemingly looks at Letty when saying to her "You coming babe". However, although Letty refuses to join him, it turns out that Shaw was actually telling this to Riley - who then reveals her allegiance to Shaw by responding "Of course. I wouldn't miss it for the world.". She then leaves with Shaw as he mocks Dom and his crew for never being in the game.

Upon reaching their getaway airplane as it prepares to take off from the NATO base in Spain, Riley can first be seen loading up her handgun in preparations to kill Mia; however, she is hit by Dom driving in a Dodge Charger SRT-8. She is then seen again having another fight with Letty, this time inside the plane. After a long fist battle, Letty then opens a door of the plane and pushes Riley towards it. Riley hangs onto the door edge and subdues Letty with a kick.

The pair come close to re-engaging each other until Hobbs shows up and tosses Letty a harpoon gun, who then tells Riley "Wrong team, bitch;" implying that Riley chose to be on the "wrong team". After giving one final glimpse at Hobbs, who simply shrugs back at her, Riley is then shot out of the plane when Letty fires the harpoon gun at her; impaling Riley while throwing her from the plane, killing her when she landed on the ground. 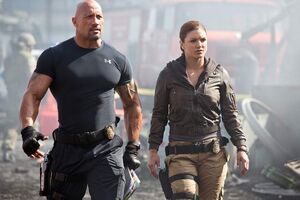 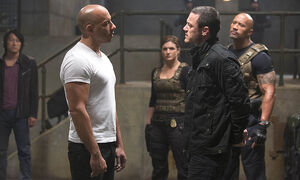 Riley's last moments before her demise.