Rilla Roo is a minor antagonist of the Crash Bandicoot game series that was introduced in Crash Bash. He is cross between a gorilla and a kangaroo. Nothing is known about Rilla Roo other than he doesn't like getting his photo taken. Crash Bash was his only appearance in the old series so far, in which he served as part of Uka Uka's team and came back in Crash Team Racing: Nitro Fueled as a playable character during the Winter Festival Grand Prix. However, he was originally going to be playable in Crash Nitro Kart.

Rilla Roo is a playable character under Uka Uka's team for Evil's victory. He serves as Dingodile's counterpart. To this day, this remains his only appearance in the entire series.

According to the Crash Bash Manual, Rilla Roo has the disposition of a train wreck and prefers to take his time around the arena, suggesting that he is rather patient. Despite this, the same manual also states that he is a first stringer and that he considers himself a closer. Also, according to the now-defunct Crash Bash website, Rilla Roo doesn’t like having his photo taken. This is reflected in the game manual, where only a silhouette of him is seen among the pictures of the other characters, to make his debut appearance a suspenseful mystery. 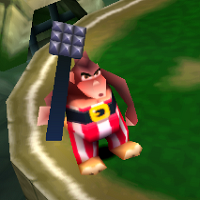 Rilla Roo reveal with other characters

Retrieved from "https://villains.fandom.com/wiki/Rilla_Roo?oldid=4156124"
Community content is available under CC-BY-SA unless otherwise noted.