Wears battlesuit that grants him the ability to condense and use several ring-based weapons
As Strikeback: Gifted mechanical engineer, levitation, energy projection, teleportation

Having his suit improved.

Super Criminal
Ringer is a supervillain in the Marvel comics universe. Three individuals have used the Ringer persona. They are Anthony "Tony" Davis, Keith Kraft, and an unnamed criminal.

A former engineer for NASA, professional criminal Anthony Davis grew jealous of the wealthy Kyle Richmond. Designing a suit of battle armor that would be constructed by the Tinkerer, Davis, calling himself the Ringer, broke into one of Richmond's buildings to rob it. Richmond confronted the Ringer in his guise of Nighthawk II, breaking several of Davis's teeth in the process. Davis was arrested and jailed, where it took a prison dentist several weeks to rebuild his broken teeth.

Disillusioned and wary of superheroes, he asked the Tinkerer to upgrade the armor design. Ringer intended to sell the new armor rather than continue committing crimes. While the Tinkerer was working on it, the N.Y.P.D. surrounded the workshop. Ringer managed to sneak in and put his armor on, but was surprised by the Beetle, who had also come to get armor upgrades. Beetle forced him to battle Spider-Man. A modified version of Ringer's own explosive ring was wrapped around his torso to make him comply. Ringer was easily beaten and the device triggered. However, it did no damage. Beetle had simply used Ringer to gain data on Spider-Man for use in his own suit.

Vowing to get away from superheroes, Ringer moved to the Midwest. Ringer was one of many criminals called to a Bar with No Name in Ohio by Firebrand to meet about the threat of Scourge of the Underworld. However, Scourge was secretly the bartender. All who showed up were killed after Scourge slaughtered Ringer and the other criminals, shooting them with explosive bullets.

Leila Davis blamed both Spider-Man and Beetle for his death. When she joined a group of other villains in attempting to kill Spidey, she was saved during the fight by her husband, who appeared as the cyborg Strikeback. Davis revealed that he had not actually died in the Scourge's massacre, but was barely alive when A.I.M. agents investigated the murder, seeking information on the technology used by the dead criminals. A.I.M. created a new cyborg body for him, and he worked for the organization for some time before striking out on his own. As Strikeback, Davis was a much more skilled fighter than he was as the Ringer, defeating Boomerang, Swarm, Vulture, and Stegron.

However, Stegron the Dinosaur Man badly damaged Strikeback's cybernetic systems during the battle, which caused them to slowly break down. During this time, he enjoyed a happy, if brief, retirement with Leila before dying. Leila herself would later perish in battle with the villain Graviton.

Arnim Zola later created a proto-husk of him, but Deadpool killed it.

The designs for the Ringer battlesuit are later used by another criminal named Keith Kraft who re-establishes the Ringer persona. He would prove to be as inept as Davis initially was. The Ringer teams up with Coachwhip and Killer Shrike to attack Moon Knight during the events of the Acts of Vengeance, a plan to destroy superheroes. He is defeated quickly. He is later employed by Justin Hammer, alongside Blacklash and Barrier. He attempts to trick Thunderbolt II into stealing some experimental aircraft plans, but is foiled by the Hulk and the ancient society known as the Pantheon.

Kraft shows up at Stilt-Man's funeral at the Bar with No Name where the Punisher poisoned the drinks and blew up the bar. Only medical attention prevents the Ringer and other villains from dying.

The Ringer is shown as a new member of Osborn's Shadow Initiative. He accompanies the team to liberate the Negative Zone prison. Ringer later assisted Hood into fighting Counter Force. He's then defeated by the Avengers Resistance in their last assault at Camp Hammer.

Ringer later appeared as a member of the Shadow Council's Masters of Evil.

Roderick Kingsley later sold the Ringer gear to an unnamed criminal. Ringer, Steeplejack, and Tumbler are shown to be in the services of Roderick Kinglsley. They were later ambushed by the Goblin King's servants Menace and Monster (the "Goblin" form of Carlie Cooper).

Following Spider-Man's victory over the Goblin King, Ringer was among the former Hobgoblin minions at the Bar with No Name where they encounter Electro.

While Spider-Man and Ms. Marvel are fighting Doctor Minerva during the Spider-Verse storyline, the Ringer robs the Diamond District only to be defeated by the new hero Silk.

In the Slide-Away Casino, Killer Shrike and Melter take Ringer to the back room. Black Cat shows him various items and tells him that even she cannot steal everything and sometimes must pay for them and asks him how is she supposed to do that when nobodies like him do not pay her weekly cut. Ringer tells Black Cat he did not pay because he was captured by Silk, owed the Spot for getting him out of jail, and had to pay Tinkerer for new equipment. He tells her they worked in some works before and remembers her having a heart and asks for compassion. Black Cat hesitates long enough for the Ringer to attack them, hitting Felicia in her arm before she takes him down. Black Cat tells Ringer he will make three times the cut and will also serve as an example having Killer Shrike and Melter beat him up. Killer Shrike and Melter then bring in Ringer and Black Cat tells Ringer to spread the word that no one steals from her.

In Ultimate Spider-Man issue 91, the Ringer appeared, but ended up defeated by both Spider-Man and Shadowcat. He was handed over to the police. He would not again appear until the 150th issue where Spider-Man is fighting him after he stole $11,000 worth of Diamonds. During the battle the two caused millions of dollars in damages. Spider-Man beats him and he is again taken off to jail. He later appears attempting to rob a bank, until stopped by the new Spider-Man (Miles Morales).

If he was alive at the time, Ringer most likely died when the entire universe came to an end as a consequence of a phenomenon known as an incursion.

On Earth-65, the Ringer is an overweight African-American woman who wears a belt that shoots rings. She is defeated by Spider-Man when he arrives at the dimension to look for his father. 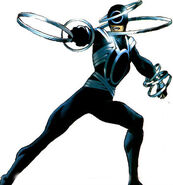 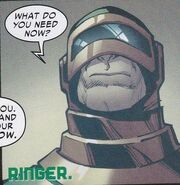