Rio is the leader of the Rinjūken Akugata school of martial arts and the main antagonist for the first half of Juuken Sentai Gekiranger. He is the youngest to lead the Rinjuken and has the power to assume a form for combat called Black Lion Rio. He later becomes a practitioner of the Genjuken style invented by Long, gaining the power to transform into Mythical Beast King Rio, though unknowingly he is secretly being used by Long to bring about "the Destroyer".

He was portrayed by Hirofumi Araki.

When Rio was young, he suffered tragedy when a monster murdered his family. That night Sha-Fu found him and took him as a student in Genjuken. From that point, Rio making it his sole purpose in life to become stronger so he wouldn't suffer such pain again.

While a student of Gekijuken, Rio saw his senior Dan to be an ideal opponent, but felt that learning Gekijūken was an dead end and resolve to master Rinjūken to defeat Dan. Gou Fukami, whom Rio came to consider his closest friend, attempted to stop him, only for their friendship to end that day. Surviving Gou's attack, Rio mastered the Akugata and later battled Dan. However, upon defeating him, Rio learned that Dan was mortally wounded prior and thus was denied a true victory. But Dan's dying words give Rio a sense to hope await the coming of his "destined" rival: his only son.

Setting up base on Rinjū Hall and reviving the Akugata's ancient warriors, Rio uses the warriors of Rinjūken to cause despair and sadness in humanity for power after receiving the Kenmas' Bracelet. In the process, Rio encounters Gekijūken's newest fighter Jan Kandou whom he feel was an worthy opponent.

To speed up his goal, Rio took the Madoku fangs from Braco to revive the two of the Kenma, Kata and Rageku. In the process, Rio learned from Kata to acquire Rinki from his own fear and hatred, as well augment it with his jealousy for Dan while under Rageku's guidance. However, Rio is soon told by the two Kenma that the existence of Gekijūken and remnants of its training in himself, represent the limit of his power. Rio goes through with the Rin Command Ceremony to swearing absolute loyalty to the Rinjūken style and the destruction of the Gekijūken style. Though able to defeat the Gekirangers, he spared after witnessing Jan manifesting Kageki, the same chi possessed by Dan. Taking Sha-Fu as a hostage in turn to give Gekirangers incentive to achieve Kageki, Rio loses his cool when Sha-Fu pointed out to him that the fear from his past still haunts in spite of becoming stronger. Rio, refusing to accept the truth, attempted to kill Retsu Fukami and Ran Uzaki until Jan defeats him as Super GekiRed.

With their fight leaving him wounded in both body and pride, Rio realized Jan is Dan's son and refuses to accept this "humiliating defeat". This lead Rio to revive the final Kenma Maku to master Kageki's polar opposite Dorinki. However, not intending to help Rio, Maku reasserted his place as Rinjūken's leader with Rio managing to manifest Dorinki on his own. But as his Dorinki is a spark compared to Maku's, Rio interrogated Gorie to the hidden village of Jūgenkyō but needs the Sozyuto to enter it without harm. Once Mele obtained the weapon while incarcerated after fighting Maku, Rio makes his way to Jūgenkyō with Sha Fu and the other Kensei attempting to stop him before the Kenma arrive. Though Maku attempted to punish him, Rio is defiant, combative, and obstreperous, by saying that he doesn't care about the Kenma or their desires as long as they stay out of his way. After the awakening of his potential due to Jūken God SaiDain's Beast Power Blooming, Rio realizes that now he and the others exposed to it are all now stronger than even Maku himself. Confirming it after challenging GekiRed to test his theory that the Gekirangers' potential is also unleashed, Rio tells GekiRed to defeat Maku and end to the war between their mentors so that their own war may commence.

Upon Maku's defeat, Rio resumes his place as sole leader of Rinjū Hall as Long, the mysterious youth who told him of Souzyuyo, finally reveals himself and offers Rio greater power under Genjūken's guidance. At first, Rio didn't believe Long's words that he is destined to become the Genjūoh. However, after facing Suugu and revealing his ties to Jan, Rio undergoes the Blood-Oath Ceremony to be infused with Genki, gaining a new fighting form that gives him mastery over the Genjū Gryphon-Fist style. Though the stronger one, Rio spares Jan and the Gekirangers so the former may train for their final confrontation.

Though Rio was later defeated in that battle, it actually allowed him to fully awaken as the Destroyer, his mind corroded into a more animalistic mentally bent on killing everything. In this state he turned into a giant and not even Saidaioh could stop him, but his feelings for Mele restore him as she tells him that Long used them. Eventually returning to the site where he lost his family, Rio learns that Long was the monster who murdered his family and guided him on path he set up for him. Devastated to learn everything he lived for was a lie, Rio was powerless to stop Long from taking Mele, the reason he was able to return to his normal self. But thanks to Jan's words, Rio gains a new purpose in life and joins the Gekirangers in rescuing Mele and fighting Long as an act of his own will while removing the Genki from his body.

After Long's defeat, Rio is invited to SCRTC along with Mele. However, only Ran and Retsu are reluctant to have them live with them, and so Rio decides to undergo the Fist Judgment with full knowledge that it may kill him in the process. After burning down Rinjū Hall to symbolize the end of Rinjūken branch, Rio takes on Retsu in the Fist Judgment, with the intention to sacrifice himself. However, Sanyo and a revived Long interrupt the proceedings as Long assumes his true form. After Mele's selfless sacrifice, Rio takes a small remnant of her Ki into himself and decides to sacrifice himself to destroy Long, despite Jan's protests. As a final act, he gives the Gekirangers the last remaining Rinki that was given to him by Kenma as penance for their deeds, and sacrifices himself in order to stop Long's rampage, promising Jan a rematch in the future.

Upon arriving in the afterlife, he is met by Mele and the two walk off, hand in hand. During the finale, both Rio and Mele guide the three Gekirangers into Rinjū Hall and reveal the Kenma before them, showing the path to unifying the two Jūken schools. Rio is later revived during the events of Go-Onger vs. Gekiranger and later the Great Legend War where his power converted into the Black Lion Rio Ranger Key before the Gokaigers returned the Ranger Keys to their rightful owners. 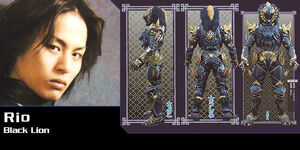 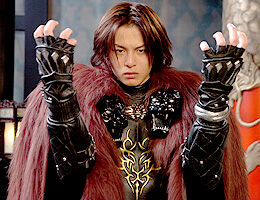 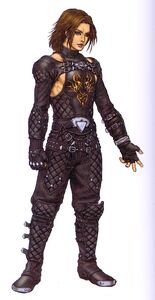 Rio without his coat 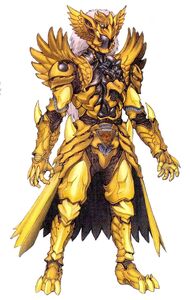