NOTE: This article is about the incarnation of Riot from the 2018 film. The mainstream version can be found here: Riot (Marvel).

Leader of the Symbiotes

Swapping one human host after another.

Bring the symbiote race to Earth so that he can enslave and kill all of humanity for them to conquer with the help of Drake.

Kill both Eddie Brock and Venom for stopping his work (all failed).

The Riot Symbiote is one of the two main antagonists (alongside Carlton Drake) of the 2018 film Venom, which is based on the Marvel comic book character of the same name and the first installment of Sony's Universe of Marvel Characters.

He is the destructive and sadistic leader of the Symbiotes, who bonds with Carlton Drake in order to accomplish their shared goal of bringing his race to Earth to bond with humanity; although, unlike Drake, he does this in order to have the symbiotes destroy and devour the human race. This incarnation of Riot is also significantly stronger and more vicious than its original comics counterpart.

He was voiced by Riz Ahmed who also played Drake in the same film.

Riot was one of the four Symbiotes that was transported inside a comet from their planet to Earth. While the first three Symbiotes were captured by Carlton Drake and his men to perform illegal experiments on human hosts, Riot was the only one to escape, landing in Malaysia. For six months, Riot made all his way from Malaysia to the U.S. by hopping from one host body to another. Taking a little girl as its current host, Riot made his way to Life Foundation HQ, where he learns of Drake's intent to use a rocket into delivering more symbiotes. Knowing that doing so might lead the Symbiotes to use Earth as a feeding ground, Riot forms a deal with Drake to help him out before bonding with him.

However, Eddie Brock refuses to let this happen, even the Venom symbiote agreed to help him out as he states that Riot happens to be the 'team leader' that has 's**t you've never seen' and must be taken down. To that end, Brock re-bonds with Venom, who heads off to confront Riot at the launch platform. Riot demanded Venom to join him by ordering him to get into the rocket, but Venom refuses, prompting an angry Riot to declare that he will kill him for this. A battle between the symbiotes ensued, with Riot gaining the upper hand on Venom. However, Anne Weying uses a high-pitch sound to briefly weaken both symbiotes, but Riot stands his grounds before stabbing Brock and leaving him for dead. Fortunately, Venom saves Brock's life by bonding with him again as Riot boards the rocket.

Just as rocket is about to take off, Venom manages to soar into the hull. Upon witnessing this, Riot angrily calls Venom a traitor, but Venom mockingly tells Riot to have a nice life before falling. Using Riot's weapon (his arm blade) when he stabbed him earlier (which he pulled out after Venom saved Eddie), he creates a large puncture to the rocket's hull to ensure that the rocket won't reach space, causing the fuel to spill out. As Riot sees the fuel leaking out, he wasn't able to stand his grounds as the leaked fuel contacts the burning but still hot engines of the rocket, causing the fuel to combust, and the resulting fire to combust the leaked fuels in the punctured fuel tanks, rupturing them, and in the process causing the rocket's hull to rip open. The resulting explosion destroys the rocket, which also destroys the rocket's engines. Riot is ignited first as he screams in painful agony while Drake is incinerated in the explosion.

Riot represents the worst side of the Symbiotes; an intensely sadistic maniac who seems to enjoy nothing but destroying and killing everything in sight, for hardly any reason at all. This is different from the protagonist Venom who, while vicious and not hesitating to murder people, still has standards and often doesn't hurt innocents, preferring to kill bad people after its interaction with Eddie Brock, making him more of an anti-hero/anti-villain. They also have different relationships to their hosts: Venom grows to genuinely care for Eddie and ultimately bonds with him, while Riot often switches between hosts and couldn't care less even about Drake.

Much like Drake, Riot has a hatred for humanity and seeks to bring the symbiotes to Earth, though unlike Drake, who does it because he wants to evolve humanity in his own empathy-free way, Riot seems to do it solely because of his own bigotry against them. Despite working together, they have quite different personalities: Drake is a cold, calculating, sophisticated and pragmatic genius whose corporate status is important to his publicity, occasionally compelling the man to put a nice facade and acts for publicity, while Riot is a rampaging brute who has no taste for pragmatism and is solely interested in immediate consequence. However, the immediate consequence would catch up to him as Venom punctured the fuel tanks of their rocket, therefore causing his death.

Riot is stated by Venom to be the strongest and most brutal Symbiote. Through Venom, he had humiliated weaker symbiotes including Venom himself in combat. Carlton Drake, on the other hand, lacked superhuman abilities of his own, but he proved compatible with Riot and the dynamic between the duo gives birth to a chaotic and unpredictable killing machine. 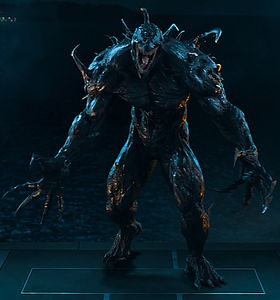 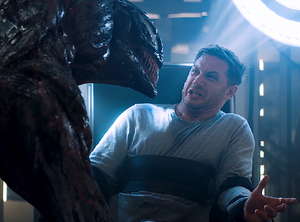 Riot revealing itself to Brock. 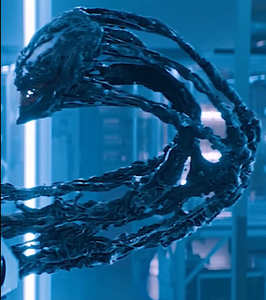 Riot preparing to turn his hands into blades. 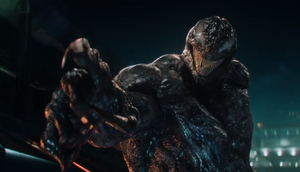 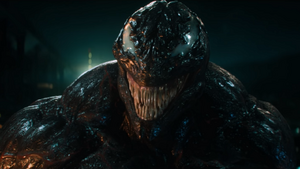 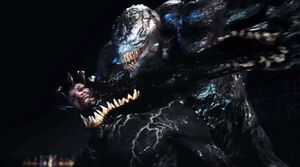 Riot and Drake clashing with Venom and Brock. 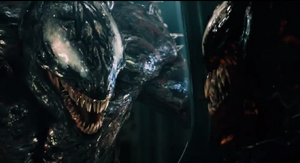 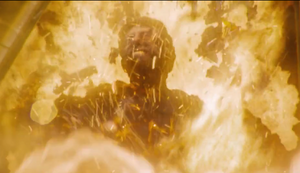 Riot's death, due to the explosion caused by the leaked fuel contacting the burning, but still hot, engines of the probe.
Add a photo to this gallery 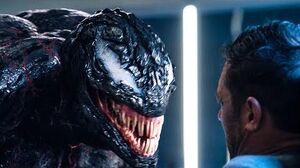 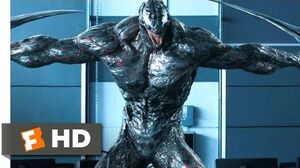 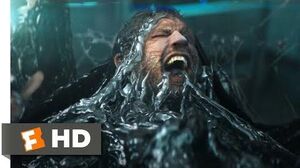 Retrieved from "https://villains.fandom.com/wiki/Riot_(2018_Film)?oldid=4263542"
Community content is available under CC-BY-SA unless otherwise noted.