Riotgear is one of Cyclonus' minions in Transformers: Robots in Disguise. He can combine with Cyclonus, Cyberwarp, Skyjack and Treadshock into Galvatronus.

When Cyclonus and his team plotted themselves into a New High Council, they they brainwashed everyone on Cybertron to blame Optimus Prime of making the Cybertron unviable. When the Stunticons was defeated and arrested, they arranged for Steeljaw and his Pack to be set free and sent to Earth to eliminate the Bee Team. And when Soundwave and Laserbeak were defeated and arrested, they sent sent Dropforge to arrest them. And they intended to put the Decepticon Empire in place whenever Megatron returned. And when the Bee Team and Steeljaw traveled to Cybertron to stop them, they entered the High Council chambers. And then the fight against them began. And when they all combine into Galvatronus and Ultra Bee, they came together in an epic battle. During the battle, Cyberwarp turned against them and rescued Ultra Bee. And then Ultra Bee defeated Galvatronus, and Cyclonus, Cyberwarp, Riotgear, Skyjack and Treadshock were de-combined and out of the game. 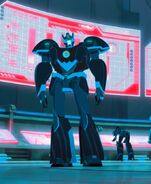