Ally of the Nazi Party

Ratting out minorities to the Nazis.

Keep his family in line by abusing them.

Become a financial success.
Turn his wife over to the Nazis (all succeeded).
Give his son to the Nazis and have him killed (succeeded, at the cost of his own life, but failed due to B.J.'s survival).

Rip Blazkowicz is a supporting antagonist in the Wolfenstein franchise. He is an unseen antagonist in The New Order, the secondary antagonist of the 2017 video game The New Colossus and a posthumous antagonist in Youngblood. He is the horrendously abusive father of B.J. Blazkowicz.

Although Rip doesn't have as much screentime as Deathshead or Frau Engel, he is quite possibly BJ's most personal enemy to date for making his childhood a living Hell as well as directly causing the death of his kind-hearted mother Zofia.

He was voiced by Glenn Morshower.

Rip was born around the 1890s in America, being the son of a poor Polish family who had a bad reputation. On August 1, 1908, Rip met a Jewish girl named Zofia, and made her laugh at a monkey joke, and she became smitten by him.

At some point in 1910, Rip married Zofia and had a son named William Joseph. The only reason he married Zofia was just to get her father's investment capital to begin his own business in Texas. When Rip's business was failing, he took his anger out on his family and would hit them on a regular basis. However, Zofia's father warned Rip that he should shut down the business, but he refused, causing his best friend and business partner, Frank, to end his friendship with him. In addition, his employee Archibald resigned because of Rip's failure, dishonesty, deviousness, and abuse behaviour.

Rip would give his son a pocket knife, but would abuse his son when he learned that he lost it to bullies. Rip ordered him to get it back, and wouldn't allow his son to enter the house until he did so, believing that the bullies had taken his "property". Another incident involved Rip's pocket watch falling down the well, and ordered B.J. to go down and get it. When his son began having nightmares about monsters in their basement, he decided to help his son, but didn't help because of compassion, but to benefit his reputation, and to stop B.J. from awaking him from his sleep.

In The Old Blood and The New Order, B.J. recalls his father locking him in the closet when he was bad, hinting at his abusive nature before his physical appearance in the series.

In 1919, Rip learned that B.J. was spending time with Billie, an African-American girl and saw them under the poplar tree. Enraged at his son, he returned home to discipline him, but was stopped by his wife, who had enough of her husband's abuse. Rip slapped her unconscious, and forced Bessie out of the room before B.J. started throwing vases at him. Despite B.J.'s bravery to protect his mother and pet, Rip grabbed his son by the throat, chocking him unconscious.

At one point in 1919 after the fight, Rip forced his son to kill the family dog, Bessie, attempting to teach his son to kill the "old and weak". The player has the choice to kill Bessie, but if not, Rip will call his son weak, and kill her. Zofia and B.J. buried Bessie, with his mother telling him it would end better than it began before hugging him.

Despite trying to teach his son his philosophy, he saw B.J. as nothing but a stink on the family name. When B.J. was old enough, he ran away from home and joined the United States Army, angering his father, and leaving Zofia heartbroken.

Once Germany won the war against the Allies in 1944, Rip along with other like-minded neighbors, exposed his wife, Jewish, African-American, homosexuals, and other minorities to the Nazis. Those who were exposed were sent to an extermination camp in New Mexico, and were killed. He also exposed his former best friend Frank and former employee Archibald to the Nazis out of spite for abandoning him and exposing his conning scheme. The Nazis rewarded his collaboration, giving him a 2,00-acre ranch in Forney Lake around 1950-1951, and never returned to the Blazkowicz estate for decades until 1961.

51 years later in 1961, when Rip heard about his son in Roswell, he set a trap for him in Mesquite, where B.J. went to collect a family heirloom to give to his pregnant wife, Anya.

When B.J. arrived in his parents' room, he and Rip have a talk. When Rip revealed that he, along with other like-minded neighbors, sold out Zofia along with other minorities and homosexuals in the neighborhood to the Nazis, he pointed his shotgun at B.J. and forced him to get on his knees. However, B.J. pushed the gun away from him and brutally killed Rip, but found out that the latter had Frau Engel and the Nazis on his phone, leading them to B.J.'s location and his capture.

Despite his son's capture, and later death at the hands of Frau Engel, his head was secured by the resistance. Set Roth later saved him by placing his head onto a super soldier's body, allowing him to continue his fight against the Nazis.

Rip Blazkowicz was an overall cruel failure of a man, at home as well as at work. Rather than examine his own shortcomings as a businessman, husband, and father, he frequently and irrationally blamed his rotten luck on his family and minorities, fueling his belief that the old and the weak are "doomed". According to his former best friend Frank, and former employee Archibald, Rip is a scheming, unscrupulous businessman who likes to con money out of customers and often displaying deeply unprofessional behaviour. Rip also embodies an extreme form of the prejudices of the time, opposing the idea of his son falling in love with an African-American girl, despite being married to a Jewish woman whom he freely admits was only for the money. The only time he showed any kindness to his son was when he helped him cure his nightmares by going down into the basement with him and Zofia to see the monsters. This flashback implies that he had some care for his son, but this was probably more likely to stop B.J. from waking him up at night, and give his son the strength to not embarrass him in public, since he cared for his name and reputation far above any other consideration. Due to his paranoid egocentricity, he is incapable of acknowledging any worth in his son; neither about his career in the army, nor as a symbol of resistance. Rip always spins every aspect of B.J. into an affront or personal insult no matter how unreasonable, possibly because he is somewhat rancorously jealous of the fact that B.J. has ultimately become much more than his father.

He is an unapologetic racist, spitefully calling B.J.'s friend Billie a racial epithet and viewing African-Americans as nothing more than a cancer to society alongside Jews, homosexuals, and other minorities or "deviants". He is also shamelessly greedy, since he married Zofia for money (even remarking on how he thought her "father would be an asset.") instead of love, and was perfectly willing to sell her and his former friends out to certain death for material gain, justifying that his wife did nothing but "make a living bemoaning" him. Furthermore, he was also extremely spiteful since he also ratted out his former best friend, Frank, and former employee, Archibald, to the Nazis, due to Frank ending his friendship with Rip, and Archibald abandoning him for squandering business opportunities - along with his terrible business ethics. He lacks any sense of remorse or self-reflection, defending his craven atrocities to B.J., claiming that the world is only for White Christians.

Despite insisting he tried "his damnedest" to put B.J. on the right track as a father, it is clear that his abuse of his son is a comfortable, natural thing for him - even when confronting a fully grown, military-trained, muscular, armed B.J. wearing armour (which Rip dismisses as "that queer outfit"), and holding a reputation for mass-murder, he refuses to take him seriously and threatens him with a shotgun, expecting no resistance as though he were still a small, helpless boy. His reaction when B.J. brutally kills him is one of pitiful, confused surprise. 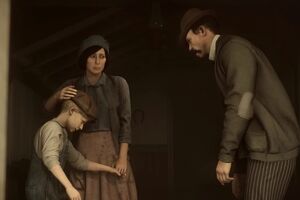 Rip abusing his son over him losing his pocket knife. 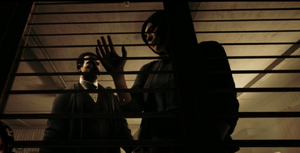 Rip antagonizing Zofia, ordering her to move away from the closet so he can "discipline" William. 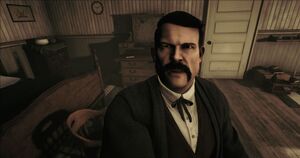 Rip choking his son to unconsciousness. 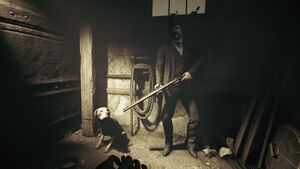 Rip giving his philosophy to his son, before ordering him to kill Bessie. 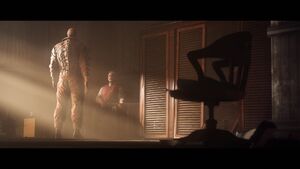 Rip holding his son at gunpoint, wanting to kill him. 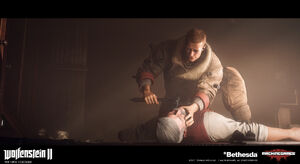 B.J. axes his father, killing him once and for all. 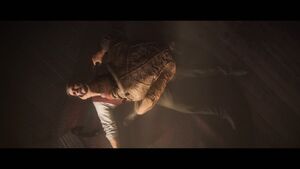 Rip's corpse as B.J. learns that he informed the Nazis of their location. 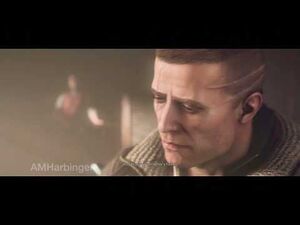