Ripper is one of the characters in XBlaze Code: Embryo and one of the antagonists. He was weakened from being drained of his Seithr by Tōya Kagari and was killed by Avenge, the man who had been hunting him throughout the first game.He returns in Lost Memories revived by the Mage's guld as Freaks and becomes the main villain.

A sadistic serial killer who worked under the alias of "Ripper", he was wanted worldwide. He was classed as an SS grade criminal. Ripper was also one of the rare Drive-Infected Patient and had been on the run from the Mitsurugi Agency for over ten years but unlike every other Drive-Infected Patient, Ripper's spirit was not contaminated by his Crystal and thus, he showed no irregularities. He was constantly on the run from Kazuto Kotetsu, the Mitsurugi Agency and even the Magic Guild (despite their pacifistic tendencies). He was one of three known Phase 0 Union, also known as "Strange Red". He also devoured Crystals of the other Drive-Infected Patient so he could become stronger and could "smell" them out, allowing him to easily locate them.

He was ludicrously insane before he even developed his Crystal and had already murdered a large number of people and disposed of them haphazardly; eventually, he was captured and sentenced. It is believed that as he was being transported to his cell, his Drive first manifested; with his new-found power, he swiftly murdered the 19-year-old suspect riding with him, his two guards, and four other officers. Following this, he escaped into the Himezuru household and murdered Yuki Himezuru's parents, leaving the, then, young girl under her parents corpses. His insanity lead to an odd immunity to the soul corruption that Crystal's are notorious for.

Ripper was first mentioned in Chapter 4, when he killed Akio Osafune by piercing his cranium 4 times and slashing multiple times at his abdomen, he soon devoured Akio's Crystal by digging it out of his wrists as the young man died from shock caused by extreme blood loss. Prior to this, Ripper had already murdered another Union in the Restricted Ward in a similar manner, and then extracted the man's Crystal by excavating it from his thigh.

Sometime later in Chapter 4, Ripper made his first formal appearance after murdering the night watchman of the crime scene where Akio lay. He attacked Mei Amanohokosaka, Es and Tōya Kagari with throwing knives before confusing the trio with a multicolored smoke bomb; he then closed the distance as he dodged Mei's Shikigami Raven attack and appeared behind Tōya, mocking him as he called him "Kagari-chan" and demanded to know where the Original Grimoire was. His mocking, however, was cut short as Es slashed at him with Vow Crystal Seal Blade: Murakumo, narrowly missing. Ripper fled to the local train station with Es on hot pursuit with Mei and Tōya trailing behind. After a brief stand off with Es and setting the train station's floor ablaze, Avenge leaped into the fray and clashed blades with Ripper as the Drive-Union laughed hysterically as they did so. When Mei and Tōya finally arrived, Ripper became bored, comparing the duo to cockroaches creeping out of woodwork. He fled after insulting Tōya, using one of his smoke bombs as a cover.

He was known for doing whatever he wanted, which ultimately led to his demise. He kidnapped Hinata Himezuru to lure out Tōya because of his "interesting smell". Stealing Hinata's phone, he called Tōya, initially posing as her, but dropping the act for the young man's reaction. He subtly told him that he would murder Hinata if he could not find him by the time the sun had set; feeling that he had been too lenient with his time, Ripper emitted a Discover Call so Tōya could find him.

He began to taunt the young man, telling him the truth about how Yuki became orphaned, but when Ripper went too far and pushed Hinata over the edge of a building to see the power deep inside Tōya, he had effectively sealed his own fate. Tōya, in a fit of rage, awakened the power of the Original Grimoire and absorbed the seithr that Ripper's Crystal needed to survive. This led to Ripper being in an incredibly weak state. He limped away to the sewers, but with no way to fight back nor run away, Ripper was finally killed by Kazuto Kotetsu.

Ripper's body was retrieved by the Magic Guild. There, they reanimated his body, and tried to erase his memories. In result, a new personality, Kiri, has developed in his body. He had no memories and was in control of their body, while Ripper remembered everything and could do nothing. He used the Brain Cat doll to talk with Kiri, and tricked him into killing the leaders of the Magic Guild and fleeing from Ishana to the New Yokozaki City. Ripper told him that his body was taken by the leader of the bad guys, "Tōya Kagari", and if Kiri kills him, he will regain his memories and return Brain Cat's body.

Kiri drained some of Tōya's seithr, and Ripper's personality took over their body. He called himself "Freaks", and killed Tōya with his friends. In the World of Tsukuyomi, Es tried to save them, but her Embryo lacked power to do so, and she fell into despair and turned into Nobody. With "Me"'s help, she returned her memories and gained enough power to make a change. She made herself a human body, which she sent back to her world, before her friends were killed.

Es helped Tōya to defeat Freaks, and they smashed his Crystal in place of his right eye, killing Freaks, but leaving Kiri alive.

More crazed and psychopathic than one could believe, Ripper was nothing short of a twisted sadist. He fully enjoyed wanton slaying and hunting Unions. Despite possessing a Crystal and being utterly devoid of any positive emotion, Ripper was fully mentally capable, being clearly able to devise cunning strategies to give him an advantage in combat. He was also somewhat sharp and intelligent, being able to discern Es as not being human after she dodged one of his attacks. He was also well known for doing what he wanted, which eventually lead to his demise.

Ripper was also a barbarically sadistic individual, as he only gets any real joy out of his opponents helplessness and scared emotions. When Es failed to reveal any emotions for him to thrive off, Ripper commented on her being boring, asking if she was "as dead on the inside as she is on the outside". In order to help strike fear and panic into his prey's hearts, he also possessed multiple bombs that were molotov-like in their design as they ignited the area around them.

Kiri, Ripper's split personalty and reanimated corpse is weak-willed, but he has a rather warm personality with an exceptional sense of justice, leading him to fight "bad guys" for the sake of peace. For some reason, he intensely dislikes being touched.

Ripper bears a strong resemblance to Hazama from BlazBlue, except he has short purple hair with green streaks, wears a white eye patch on his right eye, and he usually has his eyes closed; his eyes open when he goes maniac, revealing that he has brown eyes. He wears a magenta leather jacket with a black fur collar bearing a doll that resembles a Kaka near his abdomen; the jacket has a cross motif, with a green and black cross decorating the front and the forearms. His look is completed with plain black trousers and a pair of magenta sneakers.

After his revival, he looked like a pale and slender young man with bright green left eye. His long black hair covered his right eye, that was his Crystal before it was shattered by Es and Tōya, as well as twin ahoge and a single long strand of gray hair that extended past his chin. He had two huge scars in the shape of crosses on his hands that extended to his forearms, although these were slightly covered by the large metal cuffs and chains he wore on his wrists, and a third cross-shaped scar was on his body. He also had stitches on both hands.

He wore a black choker with a green pendant. His outfit was a large, baggy black onesie with numerous blue strips scattered across it, all of which are arranged horizontally. The suit had a zipper from its hood to its crotch, and metal rectangles adorning the hips in a belt-like manner. The suit had an entirely purple interior and brown strips decorating the large hood. Finally, a blue belt hung from his suit, and he wore blue and black shoes with brown strips on the tongue.

Ripper was an immensely powerful Drive-Infected Patient. His Drive; Scissor Hands turned his fingers into long, sharp blades that were easily capable of piercing the human body; as well as this, they were laced with seithr, and any wounds inflicted by them could not be healed by any form of healing magic. To help compliment his attacking power, Ripper was incredibly swift and fast, easily dodging Mei Amanohokosaka's Shikigami Raven attack, to her astonishment. Ripper also had an ability to "smell" Unions, meaning he could easily locate them when he wished. For some reason, Ripper emitted the same type of Discover Call that Tōya Kagari and Sechs could.

A tactic that Ripper often used was to feign being winded after or during a chase, and then attack with seemingly newfound swiftness and power when his opponent least expected it, giving him one of numerous tactical advantages; to help aide in opponents he could not catch or otherwise, his Drive also produced multiple throwing knives that he threw with deadly accuracy. Ripper also had multiple smoke bombs with him at all times to help confound his victims and gave him another tactical advantage when striking opponents, his arsenal was not just limited to smoke bombs, as he also carried molotov-like bombs as well.

After his revival as Freaks, he gained his own version of the Xblaze and is able to drain seither from Toya to absorb the power of the Original Grimore.

Ripper in Lost Memories as Freaks. 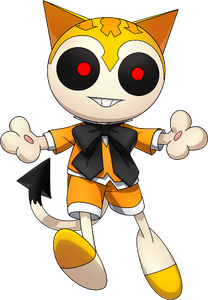 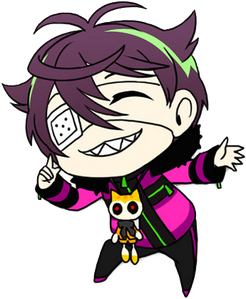 Retrieved from "https://villains.fandom.com/wiki/Ripper_(XBlaze)?oldid=3707282"
Community content is available under CC-BY-SA unless otherwise noted.