Robot Brute
Rippersnapper is a minor antagonist in the Transformers franchise, appearing in Generation One. A member of the Terrorcons, he transforms into a bipedal shark. He has a massive inferiority complex and takes it out on others whom he deems inferior, especially Autobots.

Rippersnapper debuted with the other Terrorcons in the late third season episode "Grimlock's New Brain". They accompanied Galvatron in his attempt to steal the energy from Unicron's head but were defeated by Grimlock's new creations, the Technobots. Rippersnapper and the others would appear prominently in "Money is Everything", where they assisted the Quintessons in their plan to acquire a Recreator, which saw them tangle with the Technobots again. Rippersnapper and the others were defeated thanks to the duplicity of human mercenary Dirk Magus and the Quintessons' mistrust of them, which saw them beaten by recharged Technobots.

Rippersnapper was among the animal-form Transformers abducted by Primacron in "Call of the Primitives" and among those infected with the Hate Plague in "The Return of Optimus Prime". He last appeared in "The Rebirth", taking part in Galvatron's assault on Cybertron.

He was voiced by Jim Cummings, who also voiced Scar in The Lion King II: Simba's Pride, Dick Dastardly in Wacky Races Forever and Dr. Robotnik in the 1993 Sonic the Hedgehog cartoon.

Rippersnapper first appeared in the Headmasters miniseries among the Decepticons who served Scorponok on Nebulos. He and the other Terrorcons, plus Apeface and Snapdragon, assaulted a Nebulan settlement but were driven off by Brainstorm, Hardhead and the Technobots. He was later involved in the first battle with the Autobot Targetmasters, who withdrew on realising the battle was destroying the nursery they had tried to protect.

Rippersnapper appeared in the main comic in the Underbase Saga. He was among the reinforcements who came to Scorponok's aid during a disagreement with Ratbat's Decepticon faction, battling with Octane. The two factions later joined with the Autobots against Starscream, who had absorbed the power of the Underbase and was preparing to attack Earth. Rippersnapper was part of a team led by Fortress Maximus and Soundwave who defended Buenos Aires, and was among those killed by Starscream during the battle.

The post-movie version of the character appeared in "Time Wars", attacking a human city with most of the other Terrorcons until Hun-Gurr recalled them to assist in guarding Soundwave's energy leech. The leech was quickly destroyed by Kup, Red Alert and Arcee, resulting in Rippersnapper and the others pursuing the Autobots into the past, displacing Slugslinger and several other 1989 Decepticons into limbo. Caught up in the battle with Galvatron, they quickly retreated back to their own time. 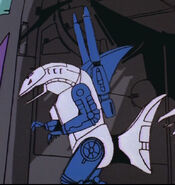 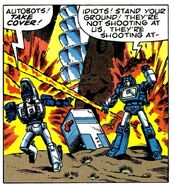