Wings Around the Globe competitor

Win the Wings Around the Globe race to keep his titanium reputation by killing Dusty (failed).

Ripslinger is the main antagonist in the 2013 Disney animated film Planes, the first installment of the spinoff series of the Cars franchise created by Pixar. He is Dusty Crophopper's arch-rival.

He was voiced by Roger Craig Smith, who is best known for his role as the voice of Sonic in the Sonic the Hedgehog franchise, and who also voiced Ocean Master in Young Justice, Belson Noles in Clarence, and Deidra in the Naruto series.

With more wins than he can count and an abundance of fans, Ripslinger is wings-down the biggest name in air racing-and he knows it. But despite sky's-the-limit funding and the state-of-the-art equipment, the world champion still doesn't play fair-especially when it comes to a small-town plane with zero racing experience. Dusty doesn't belong in Ripslinger's sport and his mere presence makes the pro's fuel boil. And if Dusty's inexperience doesn't take him out of the race, Ripslinger's vast empire includes a couple of underhanded sidekicks to take care of business.

Ripslinger is a customized hi-tech state-of-the-art carbon fiber racing plane with a wingspan of 26.2 feet/eight meters, painted green with black wings and fins, and a "flame" pattern on his headlights and doors. He also uses his racing team's Skyslicer Mark five propellers, his is a contra-rotation propeller with two blades on each prop.

Ripslinger was seen making green smoke around the airstrip and Dusty and Chug called him the Green Tornado. Ripslinger and his goons do not like Dusty Crophopper at all. Ripslinger was enjoying Hip Hop music and dismissed Dusty by calling him a farm-boy. After Dusty saved Bulldog from an engine overheat he called Dusty a nice guy, in a sarcastic way. At the German oil hall he was whispering something to Ishani. In Shanghai, Ripslinger ordered his henchmen to break Dusty's antenna and he was so pleased about it. The next morning Ripslinger and his goons ambushed Dusty, using new parts donated from the other racers, Skipper had came to the rescue. Ripslinger ripped off Skipper's tail and Ripslinger got defeated by wrecking the porta-potties after his ego got the better of him, by unknowingly letting Dusty pass him. Ripslinger was later placed on a flatbed, covered in oil, and was taken to be repaired and cleaned.

In the video game, Ripslinger is still the main antagonist and he tries to get Dusty banned from the latest WATG Rally by doing various dirty deeds, among the dirty deeds is a race against Dusty in Dubai with Ned & Zed emitting smoke to cause Dusty to crash, causing destruction around Propwash Junction, spray-painting graffiti of Dusty in a Dusty disguise, and hitting racers with paint in his disguise. He even causes trouble for Ishani by sabotaging the Diwali festival, spiking her fuel with his illegal mixture, and ruining the "Festival of Colors". In the end, Ripslinger got suspended after his dirty actions were caught on camera (he destroyed an entire WATG Rally course with a spiked plow after his plans against Dusty failed), as Skipper mentioned that ironically, his plan succeeded, and he was not worthy of being a pro racer.

Ripslinger is presented as being an arrogant, conceited and self-centered individual, but this hides a darker, malicious and ruthless core. He will go to extreme lengths to keep his fame, including destroying the lives of others. A cruel and remorseless narcissist, Ripslinger embodied the negative aspects of a renowned celebrity personality. Instinctively, he looked down upon anyone who didn't match his own social status including his fellow racers. The person he hated more than anyone else was Dusty, a crop-duster and fellow competitor who was his rival as he believed he would inspire other blue-collar workers to become a racer indicating that he was extremely paranoid about anyone stealing a glimpse of his spotlight as Dusty was slowly doing to him due to his "underdog" story.

However, it is noted that Ripslinger wasn't always like this. Ishani even remarks that he used to be a "great champion" who was more focused on the thrill of the race than actually winning but his arrogance and pride got the better of him, causing him to drown in his ego and vanity, hence Ishani's metaphor "how the mighty have fallen".

Ironically, Ripslinger's own egomania was the cause of his downfall. As when he was about to win the race, he ends up posing for a camera which allowed Dusty the opportunity to surpass him in the race. This caused him to chase after the crop-duster in rage, knocking over several porta-potties humiliating himself in front of the press, probably besmirching his reputation. 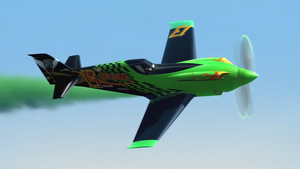 "Get my good side fellas." 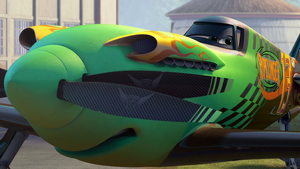 Ripslinger snaps in Nepal after Dusty gets in 1st place. 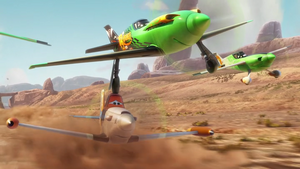 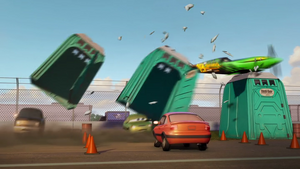 Ripslinger knocking over the porta-potties. 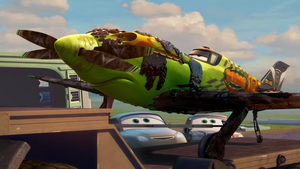 Ripslinger's defeat and humiliation as he's taken away to be repaired. 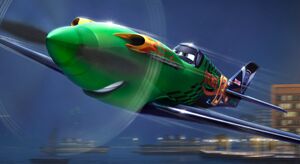 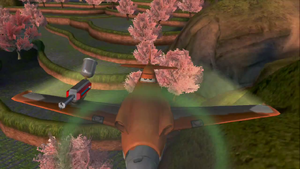 Ripslinger in his Dusty disguise in the video game.