Shorty (by Spyro)
The Wizard
The Magician

Ordering around Crush and Gulp.

Enslave and rule all of Avalar.

Destroy Spyro the Dragon and his friends (both failed).

He was voiced by Gregg Berger, who also played Commander Octodon in Danger Rangers. In the Japanese dub from the games, he was voiced by the late Kenji Utsumi.

Ripto is a small, portly orange dinosaur-like creature called a Riptoc with some higher intelligence and a hot temper who wears a white shirt, black/or purple dress pants, a regal long black/or dark purple cape-like coat with a collar the size of his head, casual black shoes, and a long ruby medallion around his neck. He is also a skilled, yet troublesome wizard who uses his own trusted gold sceptre with a ruby crystal wedged in it, to unleash his magic and wreak havoc upon other creatures bigger or smaller than him. He is always followed by his two dimwitted and ferocious sidekicks: a big ogre named Crush with tiny wings and a horned club, and a huge dinosaur steed named Gulp. Normally Ripto is the brain while his two loyal servants act as both muscle and mount.

His design in Spyro Reignited Trilogy is mostly kept the same, except he is unnaturally thinner. His cape now has flaps, curls in two parts at the end, and the collar looks a bit ragged; his stubby limbs are now longer and more lizard-like, and his shoes have long curls at the end. His eyes are now yellow with black slits for pupils, he has a row of razor-sharp teeth, and his hands are more defined having three flawed fingers.

From the beginning, Ripto, a small dinosaur, has hated dragons very much. The reason for this is never discovered, but Spyro is shown to deepen his hatred. Being small in stature, he hopes to make up for it by doing great evil things.

As a Riptoc who hated dragons, Ripto enlisted Crush and Gulp at Molten Crater in order to help him wage war on their race. When attempting to warp from one world to another, the threesome were accidentally intercepted by the Super Portal in Avalar thanks to Hunter's mistake. Upon arrival, Ripto set about enslaving Avalar and all of its realms. Thinking fast, Elora took measures to hinder his progress, shutting down the Super Portal to prevent reinforcements (most likely his Riptoc minions who would not yet appear until the events of Spyro: Enter the Dragonfly) from arriving, and delegating Zoe and her fellow fairies to scatter the orbs (which power it) across all the realms of Avalar.

Some time afterward, Ripto trailed Hunter, Elora, the Professor, and Zoe into Glimmer and watched them summon a dragon (who turned out to be Spyro) by means of a portal. After destroying the portal that brought Spyro into Avalar, Ripto became enraged at the sight of the dragon. The tyrant was forced to retreat, however, when Gulp accidentally devoured his scepter during a distraction made by Zoe, but not before vowing to deal with Spyro later.

During his reign in Avalar, Ripto succeeded in turning the citizens of some of the realms against each other, causing outbreaks of war between some realms and within others. These quarrels are soon resolved by Spyro when he travels to each realm and intervenes. Spyro battled and defeated both Crush at the Summer Forest castle's secret dungeon and Gulp at the Autumn Plains castle's hidden throneroom-like arena successfully. At the climax of Spyro's battle with Gulp, Ripto seemingly met his end when the throne he was sitting on tilted back and he plummeted into the abyss of the Autumn Plains homeworld.

However, Ripto survived and managed to steal the Super Portal's power crystal for a new scepter before locking himself into the castle in the Winter Tundra. In his arena, Ripto tried to test the power crystal on his new scepter on three sheep, but the fodder ran off before the tyrant's attack could reach them, angering him. Spyro arrived and volunteered to be a target for Ripto's power crystal, mockingly promising to stand still. Ripto agrees but finds that Spyro is prepared to fight to the bitter end. During their final battle, Ripto revealed his magically-created, mechanized version of Gulp, as well as a large mechanical bird, both of which he used for attacking and protection throughout the conflict. However, Spyro ultimately triumphed by knocking the tyrant into a pool of lava.

It is revealed in the epilogue that Ripto survived his battle with Spyro and was being used as a toy by one of Spyro's friends, an adult dragon.

After his defeat in Ripto’s Rage, Ripto desired to make life difficult for dragons everywhere, especially Spyro. He scattered guardian dragonflies, separating them from their dragon partners. Luckily, his plot was foiled, courtesy of Spyro and his friends who stopped his plans.

Ripto returns and leads an army of Rhynocs to attacked the Dragon Realms once again and has stolen the 100 fireflies. Without firefly magic, the Dragons cannot breathe fire, replacing the fire for ice, thus making the realm colder. After retrieving all 100 fireflies around the Sunny Plains, Celestial Plains and Starry Plains (learning there how to breathe lightning) and other worlds with the help of Hunter and Bianca, helping Agent 9, Sheila, and Moneybags and defeating Crush and Gulp, Spyro and Sparx finally arrive at Ripto's secret volcano lair, defeating him and returning fire breath to all the dragons.

Spyro: Attack of the Rhynocs

Ripto reappears to cause more trouble, by leading an army of Rhynocs again to attack Spyro and his friends while seeking the special magic items called "Hearts" for the Professor's projector-like peephole machine he has stolen in his quest to change the fabric of time and space and to rule the universe. Spyro won the battle against the evil wizard at his Chateau and thwarted his schemes.

Ripto formed a partnership with fellow power-hungry madman Dr. Neo Cortex to destroy their enemies Spyro and Crash Bandicoot for good. They start by genetically modifying Ripto's "Riptoc" minions and disguising them as Crash and Spyro, leading the two heroes to believe they are against each other. Instead of fighting one another like Ripto and Dr. Neo Cortex had wanted, Spyro and Crash began working together to defeat their arch-nemesis and free the world once again.

Ripto is a powerful sorcerer who uses his own sceptre to cast magic in battle as well as to cause trouble. Using the magic power of his gold scepter with a red crystal on top of it, he can shoot fireballs, create electric waves on the ground and shoot out energy blasts like a machine gun in his mischievous delight. He also can create a barrier of crystal balls made entirely out of magic in order to protect himself. Ripto can create and unleash a mechanized version of Gulp to ride, as well as make a mechanical bird-like pterodactyl to get away.

And last but not least, Ripto can transform himself into an ugly, giant version of himself with his magic scepter also turned into a club-like object with a power crystal on it.

Also, his Sceptre creates portals as a means of transportation as well as evasion as he did demonstrated this with teleporting him and his two monster minions Crush and Gulp to the throne room of his beloved Chateau.

Also, Ripto can use his Sceptre's magic to conjure not only giant mystical flat gems he rides on (with three statue heads bearing Ripto's likeness acting as conduits of the gems' sorcerous energy) at his Chateau in Spyro: Attack of the Rhynocs, but also a deck of three magic playing cards with three hearts on each of them (with the three Powerup Gates connected to the cards' magic) at his secret volcano lair in Spyro 2: Season of Flame. However, both the gems and the cards in the two videogames have one shared weakness that puts the mad but weakling spellcaster in jeopardy: They possess three basic colors on three respective elements (red/orange for fire, blue for ice, and green for electricity) which is necessary to destroy them and defeat Ripto. 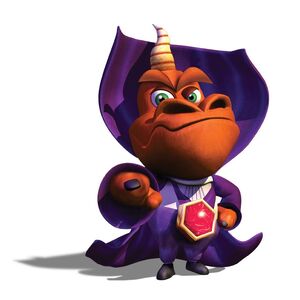 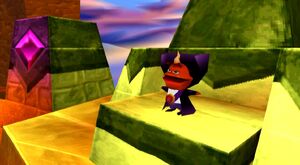 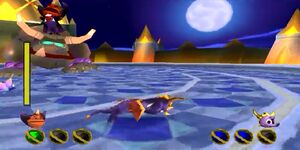 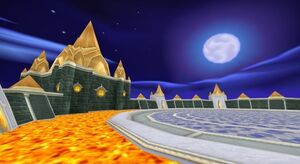 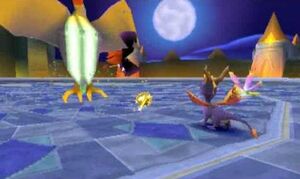 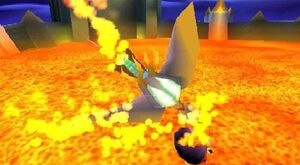 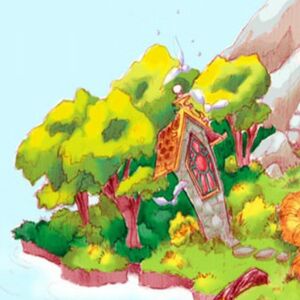 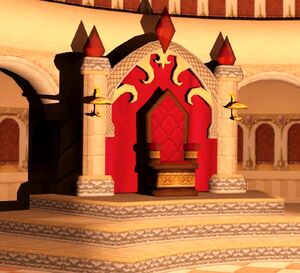 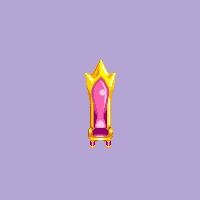 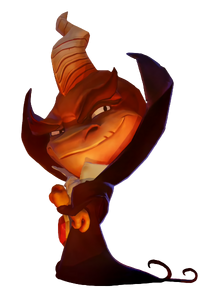 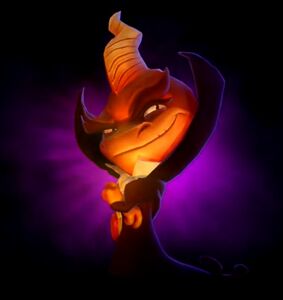 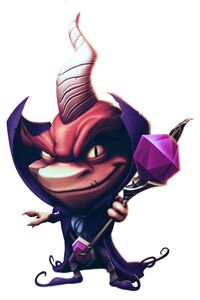 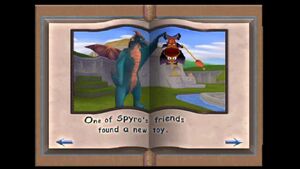 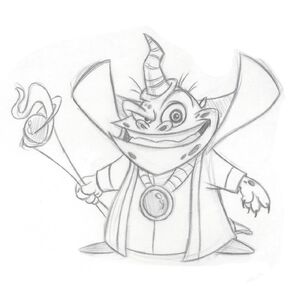 Ripto's original design.
Add a photo to this gallery 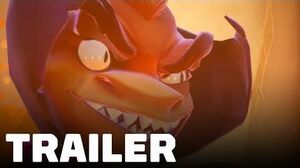 Retrieved from "https://villains.fandom.com/wiki/Ripto?oldid=4149332"
Community content is available under CC-BY-SA unless otherwise noted.