Third Son of the House of Phenex

Defeat Rias' peerage in the Rating Game (succeeded).
Defeat Issei Hyoudou, even if it means killing him (formerly; failed).

He is the third son of the Phenex family, and is the ex-fiancé of Rias Gremory in an attempt to restore the numbers of pure-blooded devils. As a member of the House of Phenex, he has inherited the powers of the immortal bird, Phoenix, granting him immortality and instant regeneration. His all-female peerage consists of 14 members.

He was voiced by Takehito Koyasu in the Japanese version of the anime, and Christopher Corey Smith in the English dubbed version, the former of whom also voices Luke Valentine in Hellsing whilst the latter also voiced Thales in Fire Emblem: Three Houses and Malak in Dark Deception.

Riser is the third (and youngest) son of the Phenex Family and the second-youngest sibling in the family, behind his sister Ravel. At some point before the start of the series, his family set up an arranged marriage between him and Rias (with her family's approval, as well) in an attempt to unite the two families and to preserve the bloodline of Pure-Blooded Devils.

Following his defeat by Issei, Riser spend his entire life locked himself to his room and never comes out from his humiliation.

Riser is a tall and handsome young man in his early 20s with short blond hair and dark blue eyes. His outfit consists of a burgundy blazer with gold embroidery on the right with matching pants and black dress shoes. Underneath his open blazer is a white dress shirt that is not fully buttoned (just one button short), giving a slight view to his chest. In his defeat by Issei Hyoudou, Riser worn a purple pajama.

During his introductory volume, Riser is shown to be an arrogant, aggressive playboy with a holier-than-thou personality, tongue-kissing two of his girls just to agitate Issei and (in the anime) making improper advances on Rias. He is also condescending towards lower-class Devils, mocking Issei on his improper use of the Boosted Gear after the latter was defeated by Mira in one blow and labeling him as a weakling. Despite this, Riser does show an honorable side, as he allows Rias and her peerage ten days to prepare themselves for their Rating Game, knowing he would simply crush her and her peerage had she not accepted. Riser also has a strange habit of referring to himself in third person. Later, after his defeat by the hands of Issei, Riser fell into a slump following his defeat, not moving out of his house after the loss. It is also explained that Riser developed a fear of Dragons as a result of losing to Issei and he became traumatized, upon seeing Issei and Dragons he would quake in fear. After recovering from his trauma, Riser seems to have reformed from his old ways, showing a degree of respect for his former combatants, especially Issei. For example, in Volume 10, he gives Rias advice on Rating Games prior to her match against Sairaorg, and in Volume 12, he gives his condolences to Ravel and Rias after Issei's supposed death. 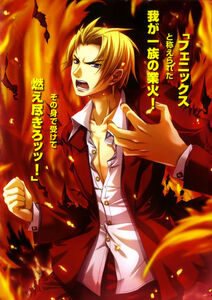 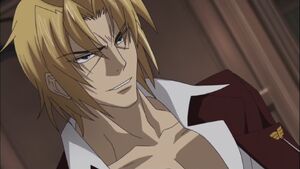 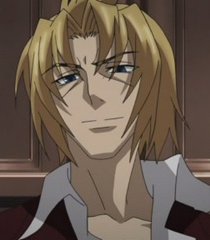 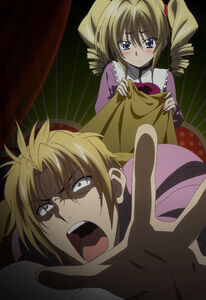 Riser's fear of dragons after his defeat by Issei Hyoudou.
Add a photo to this gallery

Retrieved from "https://villains.fandom.com/wiki/Riser_Phenex?oldid=4080234"
Community content is available under CC-BY-SA unless otherwise noted.