Overthrow the Boss and take over the drug trade (failed)

He is the leader of La Squadra Esecuzioni, a rogue unit of Passione which specialized in assassinations, and seeks to kidnap Trish Una and use her to overthrow Diavolo and take over his organization's entire drug trade.

When Risotto Nero was 14 years old, his cousin was hit by a drunk driver. Risotto did not intend to forgive him and at the age of 18, he killed the driver, thus avenging his cousin's death. From that moment on, he started living a life in solitary society. At the age of 21, Risotto decided to join Passione and was assigned as a foreman for La Squadra, which gave him full authority of the organization's assassinations.

Eventually, Risotto and his squad sought a more active role within the organization and two of his elite assassins, Sorbet and Gelato, tried to find out about the Boss' identity. They were eventually caught, with Sorbet being brutally sliced up while Gelato was forced to watch, prompting him to commit suicide by suffocating himself on his clothing gag. Sorbet's pieces were sent to the squad as a warning which made Risotto change his mind and call off the coup. This all changed when Risotto found out about the Boss' daughter and decided to use her for blackmailing him.

After the deaths of his former squad mates, Risotto takes matters into his own hands and starts observing the Boss' right-hand man Vinegar Doppio, approaching him while keeping himself distant. During Team Bucciarati's visit in Sardinia, Risotto attacks Doppio who uses Diavolo's sub-Stand Epitaph to attack and slam him into a rock. Risotto notices a hidden envelope hidden away by Doppio with its contents (a picture of Donatella Una, Trish's mother) taken away.

Risotto notices Narancia's Aerosmith patrolling the area, knowing that Bucciarati's team is hiding somewhere nearby. Doppio tries to attack Risotto, but he proves himself too dangerous to take head-on, as he uses his Stand Metallica to form razor blades within his mouth. Knowing that Doppio's Stand is a close-range type, Risotto tries to approach him more carefully while Doppio is keeping his distance, knowing that Metallica's range is within 2–3 meters. Camouflaging himself within the environments, Risotto manages to get closer to Doppio and forces needles through his nose and mouth. He then tries to slit Doppio's throat by forcing a pair of scissors through his neck. This fails, as Doppio rips them out of by himself.

Doppio, realizing Risotto's Stand ability, throws the scissors at him, which cut off his leg due to magnetic forces. Risotto uses Metallica to reattach his foot, then creates multiple knives that fly towards Doppio's direction, attempting to assassinate him once and for all. This fails as Doppio uses Epitaph to see 10 seconds in the future, thus being able to readjust himself. Risotto, realizing that Doppio is related to the Boss, tries to kill him by attempting to have multiple razor blades brutally slicing his head apart. After Doppio has lost a lot of blood and is about to be killed off, Risotto is suddenly shot by Aerosmith that detects his breathing via the radar.

Now dying, Risotto is made an offer by Diavolo who took over Doppio: a clean death in exchange for his blood levels to be returned back to normal. Instead, Risotto tries to take the Boss with him by having Aerosmith shoot through both of them. Diavolo uses King Crimson to erase half a second, thus being able to move away just in time for Risotto being shot to death by Aerosmith's bullets.

Risotto's Stand, Metallica, comprises a mass of minuscule beings residing in his bloodstream, enabling him to manipulate metal through magnetism at a short range. Not only can he create sharp metal objects that fly towards his target, he can also manipulate the iron within his target's blood, thus being able to create scissors or razor blades that tear apart through their skin and organs. Risotto can also reflect from surfaces and thus camouflage himself within environments, which is effective for spying and keeping his distance. Out of all the Stands in La Squadra, Metallica is arguably the most dangerous and deadly, as it is best suited for assassinations, which is fitting considering Risotto's status as the unit's leader. 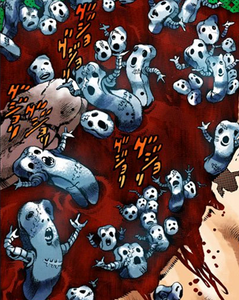 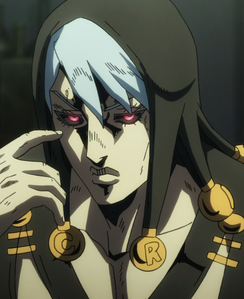 Risotto in the anime. 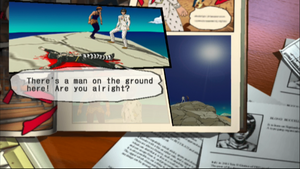 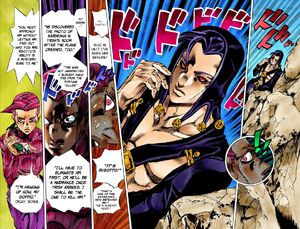 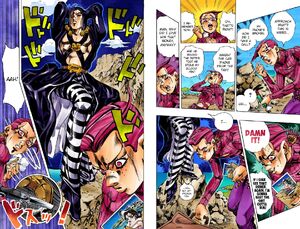 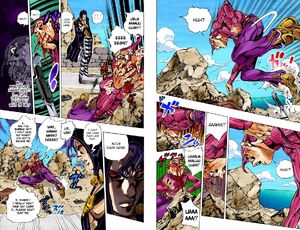 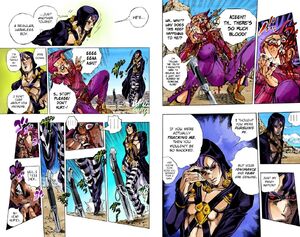 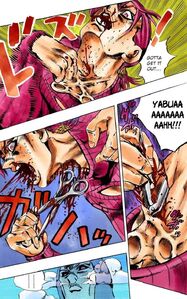 Retrieved from "https://villains.fandom.com/wiki/Risotto_Nero?oldid=3650646"
Community content is available under CC-BY-SA unless otherwise noted.