Creating monsters and taking over planets.

Destroy the Power Rangers, conquer Earth, rule the universe (formerly), assist the Mystic Rangers in destroying the Master as the Mystic Mother, protect the Earth from dark magic (currently).

The intergalactic sorceress Rita Repulsa journeyed throughout the universe causing chaos and mischief with her minions and magical powers. She eventually found her way to the Milky Way Galaxy, where she found an opponent in Zordon of Eltar. After many years of conflict, Rita lured her foe to a supposed peace talk where she managed to trap him in an other dimensional time warp. However she and her minions were trapped themselves by Zordon in a space dumpster.

But Rita wasn't trapped forever and 10,000 years after her imprisonment, she and her minions were freed by a pair of astronauts who found her dumpster on the Moon. Now free to take control of the Earth, Rita re-established herself from her ancient palace where she began sending down monsters to attack the planet. However she found herself confronted by Zordon's champions, five super powered teens known as the Power Rangers. Rita even created her own evil Power Ranger (Tommy Oliver, the Green Ranger), but he turned good and she was faced with an even greater challenge. However Rita later took away his powers with a green candle that would drain his powers when it burned out. But she still didn't get back the powers when Tommy passed his Dragon Coin (the source of his powers) to Jason, the Red Ranger. Another of Rita's more inspired plans was to capture the parents of Angel Grove so as to force the Power Rangers to hand over their Power Coins. Even after getting the Power Coins, she still didn't hand return the parents. But after Tommy received a temporary charge to his Dragon Coin, this plan was foiled as well.

Disgusted with Rita's failures, an angry Lord Zedd came to the moon to take over from his servant, by modifying Rita's fortress and taking her minions under his wing. He then banished her into another dumpster, leaving her shrunken and helpless, and cast her into space. Rita's dumpster found its way back to Earth where it was found by Bulk & Skull. She attempted to tell them the Power Rangers' secret identities, but the Rangers stopped her and sent her back into space. Rita returned again where she got in contact with her still loyal scientist, Finster, who grew her back to normal size and made her look younger. He also gave Rita a love potion that she managed to get into Zedd's system, making him fall in love with her and instantly marry her. She planned to get rid of Zedd so that she could take control of his empire.

Soon after Rita married Zedd, her brother, Rito Revolto, came to the moon to help them battle the Power Rangers. In an attempt to defeat the Rangers, she sent in a girl under her control named Katherine to spy on the Rangers and help bring them down but the girl turned on Rita. Later Rita's father, Master Vile, came to the moon seeking the Zeo Crystal and he helped her and Zedd battle with the Rangers. Vile left after turning back time in Angel Grove, reverting the Power Rangers to children, which proved extremely helpful to Rita and Zedd. They managed to get their hands on the Power Coins and destroyed them, along with the Command Center.

Rita and Zedd began celebrating their final defeat of the Power Rangers, only to find themselves under attack by the Machine Empire. They found refuge with Master Vile, but returned to take their vengeance on the Machine Empire . Rita and Zedd first attempted this by sending Louie Kaboom, under their control, to become the empire's new ruler, but he became independent and they had to think of something else. Rita and Zedd, along with the Machine Empire, tried to gain the Gold Ranger powers. After King Mondo was defeated by the Zeo Rangers again, the pair managed to plant a bomb that blew the Royal House of Gadgetry to bits.

After Divatox found herself having trouble taking down the Power Rangers, she gave Rita a call to try and get advice on how to fight them. She simply cackled and said that if she knew how to do that, she wouldn't be listening to Zedd's snoring and told Divatox to flee.

Rita and Zedd later went to the United Alliance of Evil's meeting on the Cimmerian Planet. Before the meeting began, she had a run in with Divatox, who bragged about defeating the Power Rangers. Rita in turn sarcastically told her that she should not be so certain of this. After a Red Ranger was discovered at the meeting and escaped, she volunteered to Dark Specter to go after him, but Astronema was chosen instead. Rita and Zedd took part in the Grand Monarch of Evil's universal invasion of the universe. But after Zordon sacrificed himself, the energy wave from his shattered tube swept over Rita and Zedd, making them human and turning them good.

Rita regained her magical powers, but this time it was from good magic and she became the Mystic Mother, Empress of Good Magic and leader of the Mystic Ones. She was apparently the one who gave the Mystic Force Rangers their link to the Morphing Grid and when the Master returned, he attacked the Mystic Mother. She was unable to fight him, but survived the battle and helped the Mystic Rangers defeat the Master.

Rita appeared as the main antagonist in the 2015 short film, Power/Rangers. She was disguised as original Pink Ranger Kimberly Hart (who died in battle) and had killed the rest of the original Rangers in an attempt to rule the world with Green Ranger Tommy Oliver. Once Rita reveals herself, Tommy fights her at the final scene.

Rita Repulsa is a powerful sorceress who possesses a variety of dark magical powers, and her most used one being her ability to grow her minions to giant size through her Magic Wand. Though she mainly relied on Finster for her monsters, she created a few herself. 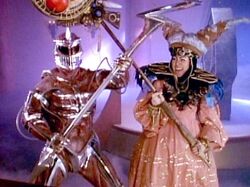 Rita and Zedd combine the power of their staffs to make their monsters grow.
Add a photo to this gallery

Retrieved from "https://villains.fandom.com/wiki/Rita_Repulsa?oldid=1260278"
Community content is available under CC-BY-SA unless otherwise noted.