NOTE: This page is about the incarnation of Rita from the 2017 movie. The mainstream version can be found here: Rita Repulsa.

Kill the Power Rangers at any costs including Zordon.

Acquire the Zeo Crystal in order to destroy all life forms on Earth.
Conquer the universe (all failed).

Rita Repulsa is the main antagonist of the 2017 film reboot of The Power Rangers. A more ruthless villainess and a fallen heroine, Rita was a traitorous Green Ranger who betrayed her fellow Rangers to take the Zeo Crystal to gain power over life and death. Her former Rangers-in-arms, led by Zordon, fell by her hand, which ended with Rita rendered comatose and in a near-death state in ocean while Zordon had his spirit transferred to the Morphing Grid through their ship's systems.

She was portrayed by Elizabeth Banks, who also played Jaina Jansen in Law & Order: Special Victims Unit, and Jenny Peterson in The Happytime Murders.

In the Cenozoic Period of Earth where the last generations of dinosaurs still remained (albeit with their numbers dwindling), the ancient Green Ranger, Rita Repulsa, for reasons that yet to be revealed (albeit indicated that she may have switched sides to Lord Zedd), turned against her fellow Rangers and came to Earth to take the Zeo Crystal, a powerful artifact with which she could harness the power of life or death as well as the power to create and destroy worlds. She knew the crystal's extraction would render all life on Earth extinct, but did not care.

To carry out her plan, she forged a special Magic Staff that enabled her to create an army of golem-like creatures called Putty Patrollers and a golden monster named Goldar that could pull the Zeo Crystal from Earth's surface as well as serve her as her sentient superweapon comparable to Zords. Her former allies, Zordon and the rest of the Rangers stood up and battled against her, but they ultimately lost the fight, as Rita managed to kill all but Zordon himself.

In a last-ditch effort to stop her, Zordon ordered Alpha 5 to redirect a meteor in her and Goldar's direction. As result, Goldar was destroyed while Rita was sent flying into the bottom of the ocean. The meteor impact also nearly killed Zordon and render the last dinosaurs extinct, but Alpha 5 managed to send him into the Morphing Grid to keep him alive.

In present day, Rita's seemingly lifeless body is fished out of the ocean by boatmen. They thought Rita's preserved body already dead long ago, but unaware that her powers keep her alive all these million years, and upon awakening, she immediately killed them and set out to Angel Grove.

Old and withered due to age and lack of nourishment, Rita searches for gold to be absorbed as means to rejuvenate herself and restore her powers. Perhaps due to either her aging effect damaged her brain or simply desperate to restore herself, she stole gold from anyone and anything she can find, often brutally murdering her victims in process and making news in Angel Grove. Eventually, Rita fully regenerated. when she comes upon one of Angel Grove's jewelry stores.

Sensing presence of other Rangers near her, she invades the home of the Yellow Ranger, Trini Kwan, and demanded her the whereabouts of the Zeo Crystal. Unable to gain information from her, Rita deduced that Trini's fellow Rangers know the crystal's location. She then morphs into her battle-damaged Ranger suit to introduced herself and reveals that she killed Trini's predecessor in the past before goad her to rally her friends to met her at the docks.

Curb-Stomp Fight At The Docks and Awakening Goldar

The Rangers later confront her at the docks to defeat her. Unfortunately, they yet to be able to mastered the ability to morph that gave Rita advantage to subdue them. She then threatened to kill Zack if any of them refuse to tell them the crystal's location. This prompt Billy to told her the crystal to save Zack. Though she got what she wanted, Rita unexpectedly killed Billy by strangled him to death and dropped his body to the water to retain her respect with Zordon. Afterwards, she left the demoralized Ranger brought their dying friend back to Zordon's ship.

Now with her restored powers reached its peak and knows where the Zeo Crystal is, Rita entered a gold mine to reconstruct Goldar and an army of Putty Patrollers where she sent a squadron of Putties to obliterate remaining Rangers and delay them. Though the Rangers, with newly revived Billy quickly decimated the Putty squadron, they delayed the heroes long enough until Goldar fully resurrected. In response, the Rangers piloted their superweapons, Zords, to combat Rita Repulsa, Goldar, and her legion of Putty Patrollers.

Battle at Angel Grove and Defeat

In the heat of the battle, Kimberly, with her Pterodactyl Zord, combined her strength with Billy who piloted his Triceratops Zord by hurling the latter's Zord through Goldar, destroying him into pieces. Even so, Rita counteract this by restoring her sentient doomsday weapon and upgrade him with more weapons. This ultimately escalated the battle to the whole new level as the heroes combined their Zords into a Megazord that battles Goldar. Ultimately, Rangers' Megazord emerges victorious. Rita erupts out of Goldar's melting form and screams at the Rangers to wait and listen to her. She yells that even though they may have stopped her and Goldar, other villains will still come to collect the Zeo Crystal themselves (hinting at Lord Zedd's potential arrival in the future) and that what the team has cannot last, screaming that they know she is right. Jason responds that they do not know for sure but will stand firm and order her to turn herself in to be judged by Zordon. This infuriates Rita to the point that she flies at the Zord, only to suffer a humiliating defeat when the Megazord literally sends her to the sky with a backhand slap (Jason giving Trini the order to counterattack with the Zord's right hand at the correct moment), launching her out of Earth entirely.

In space, near the moon, Rita smiles as she finally freezes in the vastness. It is unknown whether she can also survive this or not.

She is presumed to return in the sequel.

Because in the film series Rita Repulsa depicted as former Ranger, she possesses all powers and abilities that typical Rangers had where her physical attributes enhanced by Morphing Grid to superhuman level and access to morph into her Green Ranger suit. Although, her Green Ranger suit sustained severe damage that left her face and some portion of skin of her right arm exposed, which she left that way as remainder of her betrayal against her fellow Rangers' generations she killed in the past. Also, every time she accessed her morph to don her Ranger suit, she had some small protrusions grew under her exposed skin for some reasons.

Although, how Rita managed to kill her fellow Rangers was not just her experiences as one of them, but also through meddling with powers within her power coin that made it somewhat "corrupted" compared with titular heroes' still intact power coins (which may also contributes slight mutations she had in her Ranger form. Through the said meddling, Rita gained the ability to manipulate earthly materials such as gold, rocks, concrete, etc. to create sentient army of golem-like monsters called Putty Patrollers and a sentient doomsday weapon and monster made of reinforced gold named Goldar. She usually performed this through her special staff she forged from gold and had her power coin embedded on it as both conduit of her terrakinetic powers and melee weapon.

This version of Rita Repulsa is considered to be much more homicidally unhinged than her TV series counterpart.

When she betrayed the Rangers, she was revealed to be an incredibly malevolent, powerful, ruthless, destructive, and gleefully sadistic witch. More than that, she is described by Zordon as pure evil, which she what she really is since her betrayal.

She is proven to be extreme megalomaniac as she is enjoying from gloating about her massive power. Rita is also an ultimate psychopath; when she is arriving to Angel Grove, she starts to wreak destruction and killing people remorselessly. She is also a murderous maniac, as she takes great pleasure from harming people, killing them as well as antagonizing and attempting killing the Rangers.

When fished out of the ocean and started her killing spree, perhaps due to her extremely emaciated state and brain damage sustained from surviving her imprisonment deep in the bottom of the sea, Rita Repulsa displayed more unhinged and feral personality than her post-regenerated self: When killing a man with golden tooth, she gave off animalistic-looking evil grin before mauled the man to death with her bare hands. She behaved this way until arrived at a local jewelry store in Angel Grove where upon consuming enough gold to regenerate, Rita lose this feral side. 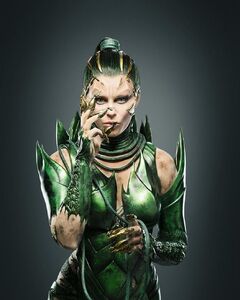 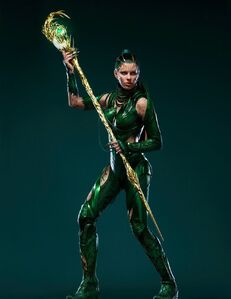 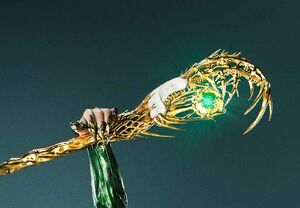 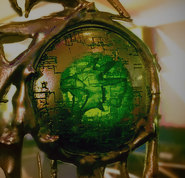 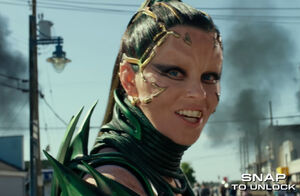 Rita's attacks the police upon being awakened.

Rita's unhinged scary snarl upon being noticed a man's golden tooth.
Add a photo to this gallery

Retrieved from "https://villains.fandom.com/wiki/Rita_Repulsa_(Power_Rangers_2017)?oldid=4001495"
Community content is available under CC-BY-SA unless otherwise noted.