His sword
His flamethrower
Magic

Rito Revolto is the younger brother of Rita Repulsa, the son of Master Vile and a supporting antagonist from Season 3 in Mighty Morphin Power Rangers.

Rito arrived on the Moon shortly after Rita and Lord Zedd were married, bringing with him eggs that hatched into their new grunt soldiers, the Tenga Warriors. Rito managed to destroy the Rangers' Thunderzords and eventually became one of Rita and Zedd's generals, usually fighting alongside Goldar.

However, he often annoyed Zedd with his incompetence, constantly calling him "Ed". Rito and Goldar eventually were sent to destroy the Command Center with a bomb and steal the Zeo Crystal.

Zeo and In Space

They were successful, but as they were teleporting out, they somehow got messed up in the process and lost their memories. Rito and Goldar ended up living with Bulk and Skull, but eventually got their memories back and rejoined Zedd and Rita in their attempts to destroy the Machine Empire. Rito later attended the United Alliance of Evil's meeting on the Cimmerian Planet. After this, it is unknown what happened to Rito, but it is presumed he was either destroyed or purified and redeemed by the energy wave from Zordon's energy tube shattering.

Rito has about the same power as Goldar and is quite a force to be contended with. He wields a sword made of bone and a flamethrower. 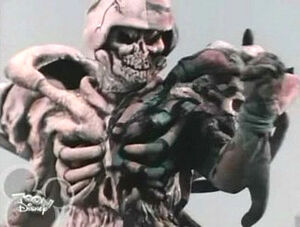 Rito
Add a photo to this gallery

Retrieved from "https://villains.fandom.com/wiki/Rito_Revolto?oldid=3415646"
Community content is available under CC-BY-SA unless otherwise noted.