The Coming of the White Worm

To rule the universe in darkness alongside the Great Old Ones.

Rlim Shaikorth appears as a huge whitish worm with a gaping maw and eyes made of dripping globules of blood. One of the Great Old Ones' avatars is known as the White Worm and is part of Smith's Hyperborean cycle.

The White Worm travels on a gigantic iceberg called Yikilth, which it can guide across the ocean. In its colossal ice-citadel, the White Worm prowls the seas, blasting ships and inhabited land masses with extreme cold. Victims of the White Worm are frozen solid, their bodies appearing eerily white, and remain preternaturally cold — they will not melt nor warm even when exposed to fire. 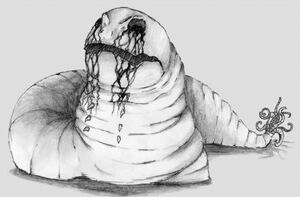 The White Worm
Add a photo to this gallery

Retrieved from "https://villains.fandom.com/wiki/Rlim_Shaikorth?oldid=3972023"
Community content is available under CC-BY-SA unless otherwise noted.