Ro-Man Extension XJ-2 also simply known as Ro-Man is the secondary antagonist of Robot Monster. He was a popular villain in early b-movies and is one of the first alien antagonists.

Ro-Man is an alien who has landed on Earth a long time ago. He was tasked by his leader The Great Guidance to kill all humans. Ro-Man made a report to The Great Guidance that he has succeeded in wiping out the human race. However, The Great Guidance says that there are still some humans left. After that, Ro-Man activates the view screen and tell the remaining humans that he had miscalculated and wasn't aware that they have survived. He tell them to show themselves and promised a painless death. Ro-Man then shows them the destruction of cities which he has caused and stating that there is no escape before signing off. Ro-Man decides to ask The Great Guidance for his guidance. The Great Guidance thinks he sounds like a human while telling Ro-Man that he won't tolerate failure before signing off. After that, Ro-Man activates the view screen again and show them that The Great Guidance destroyed the space platform and commands them to show themselves before signing off. The Professor then stated that any plans that Ro-Man has is a waste of time. Ro-Man replied that he will find a way to kill all humans. The Professor introduce everyone to Ro-Man and telling him that does he fear any of them. Ro-Man declares that he doesn't care and want to speak with Alice. Ro-Man tell her to meet him by the rivers and she must be alone.

Ro-Man encounters Johnny and questions him. Johnny says he wants to know what he is up to. Ro-Man replied that his people are becoming too intelligent. Johnny starts insulting which made Ro-Man wanting to kill him by using his death ray. Johnny is surprisingly unaffected. Johnny accidentally explains that his father injects a serum on everyone. While going back to his cave, Ro-Man made a report to The Great Guidance that he has discovered that humans are now immune to the death ray due to an antibiotic serum. Ro-Man is told to use physical means to kill from now on. Later he kills the assistant of the scientist by throwing him off a cliff and strangling the youngest girl of the group. The Great Guidance ask him why he kidnapped Alice and did not kill her. Ro-Man replied that he will not kill her but he will kill Johnny. The Great Guidance also thought he was a human. Ro-Man later killed Johnny but Ro-Man died from The Great Guidance's death ray and his body is next to Johnny.

Ro-Man is an alien with a gorilla body with a space helmet and antenna that suspiciously resembles a diver's helmet. 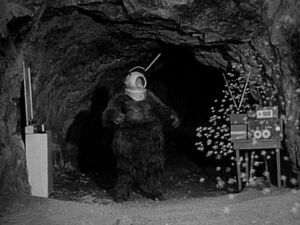 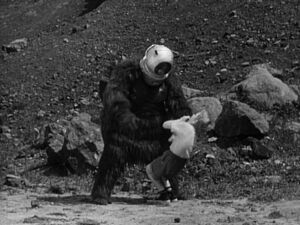