Roach Coach is a one-time villain from the Cartoon Network original series The Powerpuff Girls, only appearing in the episode "Insect Inside". He is a seemingly human roach-like creature, but he is really a robot, being operated by a highly intelligent cockroach.

He was voiced by Roger L. Jackson.

Afterwards, this cockroach traveled across town to a large hotel in The City of Townsville. There, it went into a run-down hotel room and reported to Roach Coach, while he was standing by his window, grumbling about how much he hated humans. Roach Coach heard from his messenger cockroach, "Skippy", who told him that The Powerpuff Girls are not allowed to destroy cockroaches. Roach Coach was overjoyed to hear this news, as it meant that he and his roach brethren could finally rise up and take over Townsville, knowing now, that The Powerpuff Girls can't stop them.

The following morning, billions of cockroaches invaded Townsville, crawling all over people, buildings, cars, and food. The Mayor called The Powerpuff Girls, and they reported to Townsville. Upon seeing the invasion of the cockroaches, all three of them were disgusted, and Buttercup set right off to crush every single one of them. Blossom stopped her and reminded her about what Professor Utonium taught them.

Blossom's alternative to stopping the cockroaches was to put them all in a giant jar. When she did, the town was quickly cleansed of all cockroaches, and the day was saved. Roach Coach came up and sceramed and yelled at them for imprisoning his army, revealing to The Powerpuff Girls that it was him, who caused all that chaos. The Powerpuff Girls knew their prime enemy then. Roach Coach said that he was sick of the human scumbags cluttering his planet and vowed to exterminate them all, like they did to him.

Roach Coach blew a whistle, which got all of the roaches to break free from their jar and form together, around him, making a giant cockroach monster, that ate The Powerpuff Girls. The girls sank down into the cockroaches, completely disgusted. Blossom had enough and realized that these cockroaches were "yucky" both inside and out, and she destroyed every last one of them.

After the destruction of his giant cockroach suit, Roach Coach plummeted to the ground and got himself squashed on the rapid with the floor. The Powerpuff Girls were worried that they squashed a human being, before flying down to the crash zone and discovering a bunch of robotic parts, scattered about. Bubbles found a talking cockroach, operating the Roach Coach robot suit, from the face. The true form of Roach Roach shook his fist at The Powerpuff Girls, and was promptly imprisoned inside of a jar, that was inside of a prison cell.

In "Bought and Scold", Roach Coach made a cameo. The Narrator used a bunch of adjectives to describe the villains of Townsville, as their pictures showed up on screen. Roach Coach showed up, as he said "gross".

In "Divide and Conquer", a wanted poster of Roach Coach was partly seen, again labeling him as "gross".

In "The Powerpuff Girls Rule!", Roach Coach was seen among the other background villains, as one of the people trying to obtain the key to the world. His robot body had apparently been reconstructed at this time, since this is what he was using. 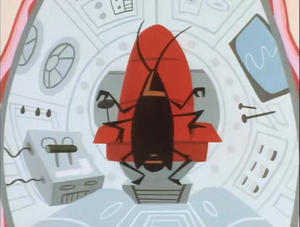 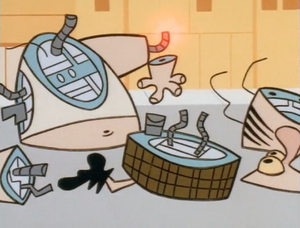 Retrieved from "https://villains.fandom.com/wiki/Roach_Coach?oldid=3305139"
Community content is available under CC-BY-SA unless otherwise noted.