Taking advantage of his personal agenda.

Cover up the fact that he murdered Tina McIntyre (failed)

He is portrayed by Marc Baylis.

Rob Donovan was born as the youngest brother to Carla Connor. When Carla had left home to marry Paul Connor, Rob was left alone to look after his drug taking mother. His mother had gotten into debts with nasty people and Rob took part in a bank robbery in order to help pay her debts, but was arrested and sentenced to seven-years in prison.

Years later Rob was released in July 2012 and came to visit his sister Carla at her factory in Coronation Street whilst she was in the middle of a domestic with partner Peter Barlow. After intervening and jumping to her defense, Rob and Carla had caught up but it was clear he was still pretty raw about her abandoning him. When Carla had chosen to leave Weatherfield with Peter, Rob had agreed to run the factory until she returned, along with old flame Michelle.

Rob ran the factory for most of 2012 and had dated Eva Price however they split up when he had an affair. In 2013 he had begun to date Tracy Barlow much to the disapproval of her family. Later that year they had set up a shop Barlow's Buys when Tracy's brother Peter had owed money to Rob and allowed them to use the property for his failed bookies business. In early 2014, they had gotten engaged. They briefly split up when Tracy had learned Rob shared a kiss with her enemy Tina McIntyre, but they resumed the relationship as they worked well together.

In May 2014 Rob had bludgeoned Tina when she had threatened to expose her affair with Peter. Fearing his sister Carla being upset, Rob accidentally knocked Tina off the Builder's Yard roof and later beat her to unconsciousness. She had died a week later. Rob was relieved when Peter was suspected of being the killer and charged, but was eventually exposed by Carla and his soon-to-be-lover Tracy Barlow; leading to his arrest and Peter being released.

Rob was sentenced to 25 years in prison for murdering Tina and also allowing Peter to take the fall. He refused to have contact from his sister and Tracy as he blamed them for shopping him to the police.

A year into his sentence a bored and envious Rob read about Johnny Connor's deal at Underworld in the newspaper. He sent out a visiting order to Tracy and saw her for the first time in 12-months. He lied to Tracy claiming that he missed her and prison was rough. 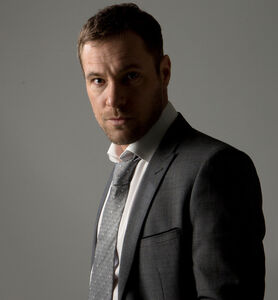 Promotional of Rob in 2014.
Add a photo to this gallery

Retrieved from "https://villains.fandom.com/wiki/Rob_Donovan?oldid=3552444"
Community content is available under CC-BY-SA unless otherwise noted.