Villains Wiki
Register
Don't have an account?
Sign In
Advertisement
in: One Piece Villains, Right-Hand, Disciplinarians,
and 42 more
English

He was once a member of the World Government secret assassin organization CP9 and was formerly the right-hand to Spandam. During the timeskip became a member of the World Government's intelligence organization CP0. While Spandam orchestrated the attack on Iceburg and planned on using the ancient weapon Pluton for world domination, Lucci planned on killing the Straw Hats including Nico Robin just to satisfy his bloodlust.

He is voiced by Tomokazu Seki in the Japanese version and Jason Liebrecht in the English version, who also voiced Dabi in My Hero Academia.

Rob Lucci is a very tall and slim, yet muscular man with arched eyebrows and a close-shaved goatee. He has shoulder length wavy hair that is sometimes tied in a ponytail. When he is not fighting, his pet pigeon Hattori is usually perched quietly on his right shoulder. He has a tattoo of a crossed-out square on each upper arm, as well as five cannonball scars on his back in the shape of the World Government symbol.

He wore a large black top hat with a sepia band until he lost it during his fight with Luffy. As a shipwright, he wore brown trousers with caramel suspenders over a white tank-top and shoes with black toe-caps. As an assassin, he wore a fancy black suit with the sleeves normally rolled up, with black leather shoes and a white tie and handkerchief in the breast pocket.

Lucci was drawn as a child by Oda after a fan asked to draw the CP9 members as children. Oda drew young Lucci with the kanji for "peace" (平和 heiwa) on his shirt, which possibly suggests that the branch Lucci is holding is an olive branch in tribute to the type of branch held by white doves (in this case Hattori) as a sign of peace.

The anime had also portrayed Lucci as a teenager in its rendition of his past story. Though the two portrayals of Lucci are meant to be him, they have different styles to them, mostly because Oda's version was drawn after the anime had already depicted him and not just because they show him at two different ages. Note that Oda did depict the silhouette of thirteen-year-old Lucci from the backside, though only briefly - this most likely is where the anime design for him originates.

In CP9's Independent Report, he wore a light spotted shirt with a black coat over his shoulders and had bandages over his forehead and chest from his fight with Luffy and let his hair fall freely.

Lucci comes off as a cold and collected CP9 agent, almost never displaying any emotions (nevertheless even he displayed shock at the knowledge that Franky had the Pluton blueprints the whole time, and is shown smirking when convincing Kaku and Kalifa to eat Devil Fruits as well as when he and Spandam realized Luffy was following them, probably because of his lust for battle). In spite of his seeming lack of emotions, he does not like being insulted.

During his fight with Luffy he did not pay attention to Usopp, until he started to insult him. An example is the brutal assault on his friend of 5 years, Paulie, whom he even tried to kill after the CP9's identities had been revealed. He also states that he feels no true bond with the city he's lived in for 5 years, and he seems to have no feelings for his fellow CP9 colleagues, least of all Spandam.

Interestingly enough, he does react rather violently if anyone calls him a gakki (slang in Japanese for kid or brat), responding with a kick and a retort both times after Iceburg and Franky referred to him as such. He finds it offensive when someone speaks weakness around him, and going as far as to dismiss a new colleuge by presumably killing him for being weak. The reason that he killed the five hundred soldiers in his past was due to another belief of his - the belief that weakness is a sin. He also believes if he is involved then the situation means blood will be drawn and that he also does not have to accept the views and ideals of his superiors as long as he completes his missions efficiently.

In combat, he is a very violent fighter, and seems to derive amusement and gratification from inflicting physical and emotional pain on others, making him a typical sadist. These scenes, along with when he anticipates battle, are the only times where he seems happy at all. In the Tower of Justice at Enies Lobby, he reveals that he only joined the World Government so he can be legally allowed to kill people.

An example of Lucci's lust for violence is when he compromised the mission of bringing Robin to the Gates of Justice by allowing Monkey D. Luffy to tail him, for the sole purpose of having a battle, smirking when Luffy burst through the door. Lucci's violent and cruel nature is also shown when he goes into full-beast mode during battle, in order to attack Luffy more violently. Another example of his sadism is when Lucci flooded the underwater passageway to the Gates of Justice in an attempt to kill the Straw Hat crew members in the passageway, because he wanted to eliminate Luffy's chances of having everything just to anger him.

Despite all this apparent lack of morality, he has displayed some, if very little, sympathy for those he dubs innocent; when the Candy Pirates are attacking a small village, he quickly dispatches the captain to save the people, though his demonstration of Absolute Justice later prompts him and his comrades to leave. He was also disgusted when his former boss Spandam attacked a defenseless Robin. This shows that deep down, he's not completely heartless.

After joining CP0, Lucci has shown absolute loyalty to the World Nobles, and is completely subservient to any orders they give regardless of how horrific. He states the Celestial Dragons are the Gods of the world, and are entitled to anything and everything they wish. However, while his true loyalty remains to the World Government itself, Lucci cares nothing whatsoever about their goals or their ideals, as he is only interested in his license to kill in order to satiate his tremendous bloodlust. Also, with his drive to achieve his goals at any cost, Lucci has demonstrated no actual care for the safety of the World Nobles and was more than willing to sacrifice several of them as collateral damage if it meant completing his mission. 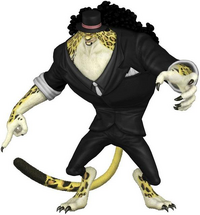 As one of the strongest characters in the series, Rob Lucci's great power is acknowledged even by the Seven Warlords of the Sea. Even at the tender age of thirteen, Lucci was already known to be a very capable mass-murderer, having killed 500 soldiers and a crew of pirates single-handedly.

It should be also noted that Rob Lucci is the strongest member of CP9 in history by far; with his Doriki at 4000, almost twice that of the second strongest member of CP9, Kaku's 2200. Franky himself noted that his strength is levels above the rest of CP9, and later remarked that, if it were not for Luffy, he was not sure how many of them would have been slaughtered. Lucci is the only person so far to single-handedly bring Luffy to the brink of death with nothing other than refined brute force.

Because of his reputation, he is a very valuable asset to the World Government, almost to the point of legend; the Vice Admirals even believe that he can survive a Buster Call attack. His (along with the rest of the CP9 unit's) value has been diminished upon his loss against Luffy and now acting as a renegade crew, hunting for their former superior Spandam who betrayed them.

Along with his great superhuman strength and speed, Lucci is a highly intelligent and cunning individual, being able to become a master carpenter within a 5-year period merely as a form of espionage and surveillance over his "boss" Iceburg (who CP9 believed to have possession of the blueprints for the Ancient Weapon Pluton), and even when it was discovered otherwise, Lucci quickly deduced the next most likely candidate (Franky) based solely on their adolescent friendship. He and the other CP9 agents that infiltrated Water 7 deceived every single inhabitant, a clear sign of their manipulative skills.

A sound tactician, Lucci manages to almost single-handedly eliminate the Straw Hat Pirates (excluding Luffy, who he was battling) by understanding the structure of his environment and firing a well-aimed "Rankyaku" through a stone wall, flooding the ground floor of the Tower of Justice and all its hidden underground passages with seawater: had it not been for the unexpected arrival of Kokoro and her mermaid heritage, they would not have survived. He also quickly analyzes the mechanics behind Luffy's Gear Second technique after engaging it for just a couple of minutes at most, explaining it to the rubber-man and stating that such bodily pressure would shave off years to his lifespan.

Since Lucci worked as a shipwright during his mission in Water 7, this means that he has some carpentry skills and has knowledge about ships.

Lucci has complete mastery of Rokushiki, having used at least one or more moves from each of the different forms, such as Rankyaku Hyoubi and Tobu Shigan: Bachi. He demonstrates this when he unveils the Rokushiki hidden technique, Rokuougan, during his fight with Luffy. The massively powerful technique is so strong that it causes severe internal injury to Luffy's body, who described its effect as an Impact Dial with greatly amplified power; no small feat considering that he is made of rubber. With his complete mastery of Rokushiki, in conjunction with his Devil Fruit ability, Lucci proved to be a resilient and formidable foe, fighting on an equal footing with Luffy in Gear Second, and literally forcing him to exert every ounce of strength against him.

Rob Lucci ate the Cat-Cat Fruit Model: Leopard, a Zoan-class Devil Fruit which allows him to transform into a leopard and a giant leopard-human hybrid. As Zoan class Devil Fruits enhances physical capabilities the most, it is most favored by martial artists like Lucci. Also, being a carnivorous animal, Lucci is more bloodthirsty and predatory than a regular Zoan class user, proven when he mauled Luffy as an actual leopard.

It has been revealed that Lucci can perform Life Return, like Kumadori, and use it to alter his body into forms that amplify his skills in a specific Rokushiki ability. However, only the Kami-e Form, which makes his man-beast form smaller and thinner, more like an average man-size, has been seen.