Trying to defame smoking at all costs.

Get revenge on Cartman by killing him to make his commercial look real (both failed).

Robert "Rob" Reiner is a major antagonist of South Park. He is based on the real-life actor, director, producer, and writer of the same name.

He was voiced by Trey Parker, who also voices Cartman.

Appearing in the episode "Butt Out", Reiner was depicted as a really greedy, obese, and gluttonous tyrant who imposed his anti-smoking will on others to the extreme.

His style of ruling was so brutal, it brought him praise by Cartman, but hatred from Stan, Kyle, and Kenny. In keeping with the show's parody aspect, Rob Reiner and his anti-smoking group were seen as evil, while the tobacco company was depicted as a happy, peaceful place, one that Reiner sought to destroy by any means necessary. While his friends try to warn Cartman about Reiner, he dismisses their concerns and continues to show undying praise and loyalty to him.

Reiner even went as far as planning to murder Cartman so that he could claim the boy had died of cancer caused by secondhand smoke, which Cartman realized for himself after appearing in a commercial filmed by Reiner's organization in which he portrayed a boy dying of cancer. Now realizing that his friends were right about Reiner, after all, Cartman fled to seek their reluctant aid.

When Reiner was next seen, he was leading the townspeople in a riot against the tobacco company, where the boys had taken Cartman to enlist the company's help in protecting him, as they knew the vice president there would not support Reiner's plan. However, during the riot, Reiner announced that his plan was to kill Cartman as part of his plan to end the tobacco company. Shocked and outraged by his arrogant announcement (Stan's father, Randy, in particular, calls him out by saying, "Wha -- what the hell is wrong with you?! That's not right!"), the townspeople recognize him as a child murderer and turn against him.

In the end, an angered Cartman stabs Reiner with a fork, causing the tyrant to melt away as goo flows out of his body, all while uttering his now-famous line "My goo! My precious goo!".

Despite this, he later reappeared in the episodes "200" and "201", along with most of the other celebrities the show had previously mocked. Once again, he went after Cartman, though this time out of revenge. 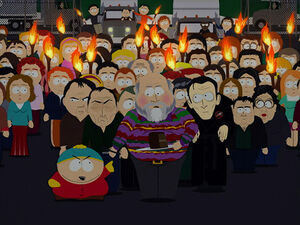 Cartman standing up to Rob Reiner, whom he no longer idolizes.