Steal everything he can get his hands on (succeeded until his arrest).

Give his children a good Christmas (succeeded).

Robber Santa Claus is the main antagonist in Friday After Next.

He was portrayed by Rickey Smiley.

During the animated opening credits, The Santa Thief is seen stealing everything he can get his hands on while being chased and shot at by the police, but manages to escape.

He's then seen at Craig and Day-Day's apartment, stealing their Christmas presents and their rent money. He's soon caught by Craig who starts fighting with him whiling yelling for Day-Day to help, but he's asleep. The Santa Thief manages to beat Craig and then run away with their money and gifts. The next day, Craig reports what happens to the police, but they only mock him for being beaten up by a man dressed as Santa Claus with a Christmas tree.

Later, The Santa Thief appears again when he robs Craig, Day-Day, and Uncle Elroy at gunpoint. He runs off with $20 and Elroy's gold watch.

When The Santa Thief is later shown in his run down home looking over all the stuff he's stolen, Craig and Day-Day suddenly break in and start chasing him once again through an apartment building, being assaulted by gang members and nearly shot by an insane old man with a double barrel shotgun.

The Santa Thief nearly escapes once again, but he's hit by Pimp Pinky's limousine and finally subdued enough for Craig and Day-Day to catch up with him and they tie him up on a roof's sleigh ornament, later being arrested for his serial breaking and entering as mentioned by Craig.

The Santa Thief was revealed to be a homeless man who was only stealing to provide for his children and give them a nice Christmas. When The Jones Family and Pinky arrive at his run down house threatening to beat him up and take their stuff back, his children tell them to leave him alone and take their stuff backs since they don't need it anyways. Craig feels sorry for him and lets him keep their stuff. The Jones Family and Pinky then decide to spend Christmas with him and his kids.

The Santa Thief during the opening credits. 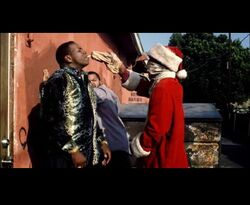 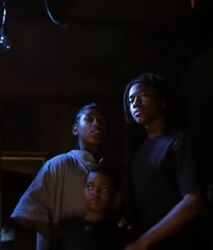 Santa Thief's three children.
Add a photo to this gallery

Retrieved from "https://villains.fandom.com/wiki/Robber_Santa_Claus?oldid=3925962"
Community content is available under CC-BY-SA unless otherwise noted.