Dimwitted Drug Dealer
Robby is a recurring antagonist in Paradise P.D.. He is a dimwitted hillbilly who robs convenience stores and does illegal drugs. He is usually accompanied by his right-hand man, illegally laundered "brother", and possible lover, Delbert. Starting with Season 3, Robby has become the king of his own country called, Twatemala, which he rules alongside his mutated alligator friend, William.

He was voiced by Waco O'Guin.

Robby and Delbert first appeared in "Welcome to Paradise", where they worked at a video store. Kevin suspected them to be drug dealers and although they denied the accusations, they were later revealed to be part of the Argyle Meth Corporation, making argyle meth for Terry Two Toes. After getting arrested, the duo manipulated Kevin into setting them free from their holding cell in exchange for them showing him where Terry Two Toes is.

In "Black & Blue", Robby and Delbert buy guns from a Russian mobster in exchange for argyle meth.

In "Meet the Jabowskis", Robby and Delbert sell crack at their house. Because the only police officer to stop them was incompetent, Dusty Marlowe, neither of them learned their lesson until Gina Jabowski stepped in. While Gina was out of commission, Robby and Delbert realized that everything is fair game, now that the only real threat is gone. The two took over the police department and threw a huge party, destroying the place. They convinced Dusty to shred their criminal records and they later tattooed Randall Crawford's face. When Gina came back, she punished them by shoving Delbert's head up Robby's rear.

In "Task Force", the pressure of working in the Argyle Meth Business becomes too much for them to handle and they quit the team. The Kingpin wasn't happy with this, so he summoned his goons to come in and attack them by chopping Delbert's arm off.

In "Tucker Carlson is a Huge Dick", Robby and Delbert rob a liquor store.

In "Who Ate Wally's Waffles?", Robby acts like a brat on his birthday, demanding things from his parents. He even goes as far as to kill his own grandma, just so that he can get a picture in her iron lung.

In "Fallout", Robby and Delbert discovered a newly formed island in the middle of Lake Paradise, caused by Gerald Fitzgerald's nuclear explosion. He and Delbert decided to claim that land as their own and name it Twatemala and for the country's flag, they used a pair of underpants, which Robby stole from an Asian guy's wife after sexually harassing her. Robby named himself the king of Twatemala and befriended a mutated alligator with wings named William, who he summoned to attacked and mutilate Delbert and rewarded him with hot dogs. When Robby ran out of hot dogs, he led Twatemala to war with Paradise and demanded hot dogs from them. Robby won the wiener war by having William fly in and eat Randall's polyp.

In "Top Cops", Robby and Delbert beat up and pickpocketed the King of Sweden only to immediately get beaten up and arrested by Gina.

In "Ice Ice Babies", Robby illegally opened a carnival, which violated various building codes. However, it would turn out in the end that because this was built on Twatemalan land, the cops of Paradise P.D. had no business shutting it down, since it was in another country and Robby was completely in the clear.

In "Trigger Warnings", Robby gave a gun to his nephew for his birthday, which he accidentally killed himself with by shooting open a pinata full of other loaded guns, which killed all of the other kids and the clown at the birthday party.

In "Blind Drunk", Robby brewed illegal moonshine and then distributed it all throughout Paradise, during Prohibition. To avoid getting arrested by the cops, Robby, Delbert, and Bullet, who they had turned to the dark side, all rode around town, crashing into buildings, running over people, and blowing things up. They ended up getting away with it in the end because they trapped their arresting officer, Dusty Marlow in a tree and got him drunk on moonshine by force-feeding him it up his behind. 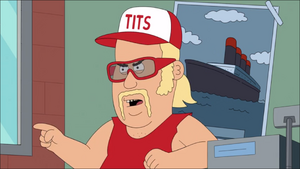 Robby getting mad at the police. 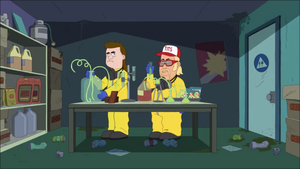 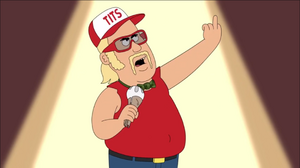 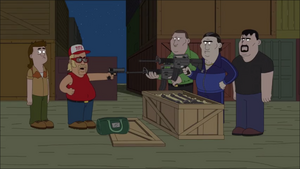 Robby getting into a Mexican standoff with the Russian Mafia. 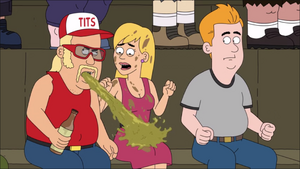 A drunken Robby vomiting on Stacy. 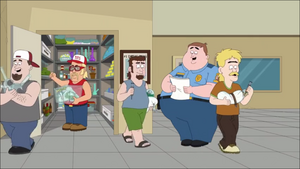 Robby and his friends robbing Paradise P.D. of their drugs. 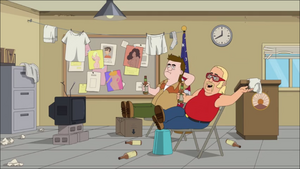 Robby and Delbert after taking over Paradise P.D.. 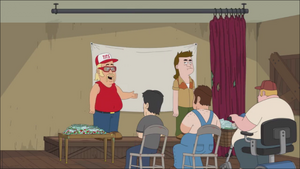 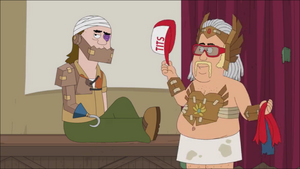