The Fat Kid (by Ted)

Take Ted from John Bennett's hands to his own hands in order to torture and abuse him (failed).

Robert, also known by his nickname the Fat Kid, is the secondary antagonist of Ted. He is Donny's son who also wants Ted as his new toy.

He was portrayed by Aedin Mincks, who also played Angus on A.N.T. Farm.

When Robert was born, his father Donny vowed to be the best father he could be and never say no to him. Donny's obsession with Ted carried over to Robert.

Donny and Robert are first introduced as an innocent father and son. After seeing Ted in the park, they ask if they can buy him off John, but he refuses to part with him. Robert's disturbed personality shows through a little, hinting at things to come.

After Robert and Donny kidnap Ted, he is sent to Robert's room to be played with. When Ted swears, Robert tears off his ear as punishment he calls an "ouch". Ted reluctantly agrees to play with Robert by suggesting hide-and-seek. While Robert counts, Ted makes his escape. Robert and Donny find Ted trying to call John. They then stash him in their car and drive away, passing John and Lori who were on their trail. After chasing Ted to a stadium, Robert loses him. Upon seeing John and Lori, he runs at them screaming. John punches him, knocking him out, much to Lori's shock.

It was revealed in the end that through unknown means, Robert got a personal trainer, lost weight, and became Taylor Lautner.

He does not appear, nor he's even mentioned, in Ted 2.

Robert is an obese boy who wears a brown jacket with a shirt, brown on top, light brown at the bottom. He also wears gray pants and white trainers.

Robert is almost as unhinged as his father. He cannot handle not getting what he wanted and would attack anyone who might upset him. He is shown to be quite sheltered and gullible, as he is willing to believe anything Ted told him so, as long as he said it in an extremely polite tone of voice.

At one point in the film, Robert tells Ted that he once said a bad word and that his father punished him for it by spanking him (or, as Robert calls it, "gave him an ouch"). He is also shown to be sadistic when he ripped Ted's left ear off as punishment for using blasphemous language. 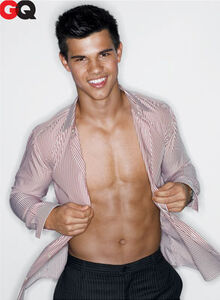