Rape as many women as he wants (somewhat succeeded)

Homeless Parolee
Robert Brunner is a minor antagonist in season five of Dexter.

He was portrayed by Chris Payne Gilbert.

Little is known about Brunner's life before his only appearance, but what is known is that he was a violent rapist who enjoyed scarring women's backs with whips and his own nails. At some point, he met and became good friends with Boyd Fowler, one of the members of the Barrel Girl Gang, while he was in prison for three years out of his seven year sentence for good behavior.

Sometime later, both he and Fowler was released and put on parole, but had nowhere to go and consequently became homeless where he stayed under the Julia Tuttle bridge with several other convicted rapists and sexual deviants.

After Lumen Pierce escapes Boyd Fowler with the help of Dexter Morgan after he kills him, Lumen finds a letter from Brunner in Fowler's home and assumes that Brunner is one of the several men who raped her, then decides to track him down.

Dexter does his own research on Brunner and manages to find him before Lumen does and pretends to be a fellow rapist to see if Brunner is truly one of the Barrel Girl Gang members, and gains his trust. Brunner tells Dexter his plans to head north to try and rape some farm women and then brags to Dexter about he and some unknown friends raped a blonde woman, making Dexter believe at first he is indeed one of Lumen's rapists and tranquilizes Brunner.

While setting up a kill room for Brunner however, he finds out that Brunner was wearing an ankle bracelet the entire time that was tracking his unconscious movements, and Dexter hurriedly rushes Brunner back to spot he abducted him at.

The next day, Dexter manages to stop Lumen from shooting Brunner and while she's at first furious that he would stop her from killing whom she believed one of her abductors, Dexter informs her that he isn't one of the men who raped her just because he was friends with Boyd Fowler. 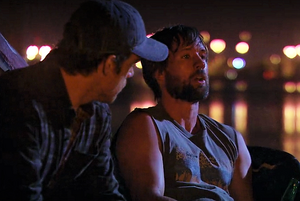 Brunner sitting with Dexter, talking about his past crimes. 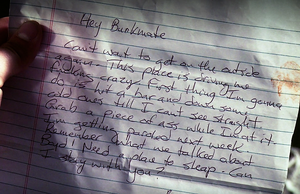 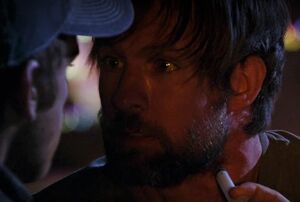 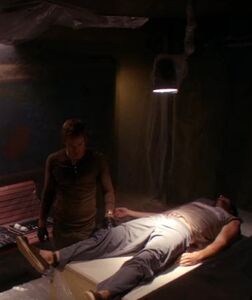 Brunner on his intended kill table, when Dexter notices his parole ankle bracelet.
Add a photo to this gallery

Retrieved from "https://villains.fandom.com/wiki/Robert_Brunner?oldid=4151567"
Community content is available under CC-BY-SA unless otherwise noted.