Supreme Director of the CIA

Founder of the Iron Hand Program

Attempting to find and kill Bourne.

He is the corrupt supreme director of the CIA who directly ordered The Asset to assassinate Richard Webb. Thereafter Dewey sought to eliminate Richard's son David Webb, better known as rogue CIA agent Jason Bourne, thus being the one to orchestrate countless manhunts for the same target in previous films.

He was portrayed by Tommy Lee Jones, who also played William Strannix in Under Siege, Ryan Gaerity in Blown Away, Major Chip Hazard in Small Soldiers, Two-Face in Batman Forever, H. Clifford McBride in Ad Astra and John Neville in Eyes of Laura Mars.

Dewey was a highly decorated CIA official who had attempted to enlist David Webb into Treadstone, founded by Webb's father Richard. When Richard prohibited his son into Treadstone, he had his personal assassin, dubbed The Asset to kill Richard, staging it as a terrorist attack.

After the events of The Bourne Ultimatum, when David - under the name Jason Bourne - exposed Blackbriar, Dewey took over Ezra Kramer's position as CIA Director after his arrest. Sometime between 2004 and 2016, Dewey had created "Iron Hand", the codename for a CIA program intended to be a reboot of the Treadstone, Blackbriar, Outcome and LARX projects.

In 2016, Dewey and CIA Cyber-Ops Division Head Heather Lee were present when a CIA hacking orchestrated by Nicolette "Nicky" Parsons occurred. In the light of this, Dewey ordered a manhunt for Parsons under the belief that she had contacted Bourne for a meeting at a civil riot in Syntagma Square. When CIA teams failed to apprehend and kill them, Dewey planted the Asset to assassinate them both: In the outcome, after a vehicular chase across Athens, Parsons was shot dead but Bourne escaped with the keys to a safe deposit box with CIA files and a hard drive Parsons chucked at him before she was killed.

In the aftermath of the Greece incident the following day, Dewey appears in a meeting with Edwin Russell, the Director of National Intelligence. Lee then walked in and as explained her plan to Dewey: Contact Bourne under the belief that she could persuade him back into the CIA as an agent. Dewey seemingly accepts with glee and Lee leaves the room. Dewey and his right-hand man Craig Jeffers are the only two who remain in the room, leaving them to discuss their true intentions.

At a café, Dewey arranged a meeting with Aaron Kalloor, a public face of corporate social responsibility in an attempt to ally with him for a public debate about privacy rights, but secretly plans to use his enterprise Deep Dream as a mass-surveillance program for Iron Hand: After a negotiation, Kalloor reluctantly accepts before he leaves the café.

After killing Dewey's team and one of his top assassins Christian Dassault in a battle, Bourne uses the few leads that he gained in Berlin. He soon tracks Malcolm Smith, a former Treadstone surveillance operative at London, England and arranges him to meet him at Paddington Plaza. During their meeting, Smith reveals Bourne that his father David had created the Treadstone program but actually attempted to prevent them to recruit Bourne himself.

He adds in his things, saying that Dewey ordered the Asset to kill Richard and staged his death as a terrorist attack to persuade Bourne to join into the Treadstone program. After the confrontation, the Asset assassinates Smith while Bourne escapes and finds Lee, whom she isn't feeling comfortable with Dewey's methods and directs him to a technology convection called EXOCON at Las Vegas, Nevada.

At the convection, Dewey is scheduled to attend the convection for a public debate on privacy rights with Kalloor which is the public face. He was secretly funded by Dewey who intends to carry out his true plan; use the Deep Dream for real-time worldwide massive surveillance systems alongside the reborn programs Treadstone, Outcome, Blackbriar and LARX, now collectively known as "Iron Hand". Suspecting that Kalloor will refuse to allow the CIA's access to Deep Dream, Dewey orders the Asset to take down Kalloor as well as Lee - whom he no longer trusts shortly after he deduces her conspiracy with Bourne. Unfortunately for Dewey, Bourne stops the assassination by blinding the Asset, although he shoots Kalloor regardless.

In the midst of the thwarted shooting, Jeffers insisted that Dewey escape in a vehicular escort, but Dewey chose to remain his ground on an upper floor. Bourne tracked him to his room and threatened him by pinning him against a wall: knowing that his agents were closing in, Dewey stalled for time with Bourne, distracting him through a speech about patriotism whilst attempting to deceive him in rejoining the agency.

Bourne avoids temptation and is about to execute Dewey when Jeffers suddenly intervenes and pulls a gun on Bourne; both men wound each other with a single gunfire, albeit Jeffers is killed whereas Bourne is injured. Dewey uses this distraction to reach for his handgun and prepares to shoot Bourne. However, before he could deliver the finishing kill, Lee arrived and shot Dewey, killing him as he fatally stumbles into a wall. Shortly afterwards, Bourne covered up Lee's involvement in Dewey's death before going on to proceed in chasing and killing the Asset. Later on Dewey's scheme was exposed when Lee and Russell discussed how Dewey's methods were outdated and she Lee herself offered to take his position as the new CIA director, as well as finish the agency's ongoing matter with Bourne by any means necessary. 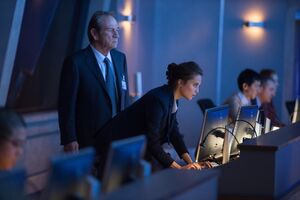 Dewey hunts down Bourne and Parsons 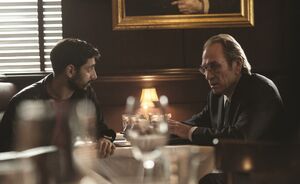 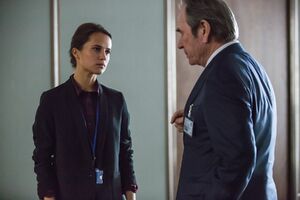 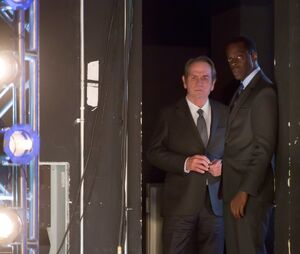 Dewey orders The Asset to eliminate Kalloor and Lee

Dewey comes face-to-face with Jason Bourne for the first time! 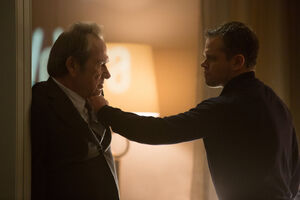 Dewey being interrogated by Bourne moments before his demise