Cutting off his victims' fingers.

Take over the entire city.

Become the greatest crime lord on his turf.
Kill Darkman (all failed).

Robert G. Durant is the secondary antagonist of the 1990 live action film Darkman and the titular main antagonist of its 1995 direct-to-video sequel Darkman II: The Return of Durant.

He was portrayed by the late Larry Drake, who also portrays Dr. Giggles in the horror film franchise of the same name.

Robert G. Durant is one of the most nefarious and brutal criminals to live. His main business interests are drugs (although he does not take them), racketeering, and black market weapons trading. His main business front is Intercity Land Development, where he is able to buy out pieces of property for his illegal activities.

Durant is a criminal mastermind of genius level intellect. His personal syndicate interests include drug trafficking, human trafficking, racketeering, black market weapons, money laundering, and financing various national and international criminal and terrorist enterprises. Durant maintains a massive network of underworld and mainstream connections, ranging from police officials, scientists, business tycoons and lawyers to federal agents, politicians, militants and crime lords throughout the world, keeping them loyal through bribery, blackmail, and intimidation. He also employs multiple hideouts, safe houses and hidden bunkers to remain away from prying eyes. His personal crew of enforcers can easily be labeled as "violence-crazed losers" for their brutality and weak wills. He prefers them so he can control them easier and order them to use their abilities for his own benefit.

His personality consists of sadistic, psychopathic and cynical, almost emotionless behavior. He greatly enjoys killing and torturing people, but even then he maintains a cynical business like attitude. He seems to lack the ability to feel emotion other than anger or greed. He is extremely paranoid and ill tempered, so much so that he'll kill his own men on mere suggestion if they make the slightest blunder. The motives to his actions are mainly greed; he is ambitious to the point where his personal sadistic ways are used in obtaining his goals.

Durant's modus operandi is to sever the fingers of his victims with his golden cigar trimmer, in which he collects and keeps in a box as trophies.

For a long time during his career, he made himself a list of enemies but due to his sadistic way of killing and the power he has with his connections to government officials, no one dares to cross him. Soon it changed when Durant met Peyton Westlake, while performing a favor to corrupt businessman Louis Strack Jr. to retrieve an incriminating document, Durant had Westlake beaten and burned beyond recognition, thus creating Darkman.

Durant's gang began to drop like flies, and with his money being stolen, he eventually discovered Westlake survived their encounter and he orchestrated an attack on Darkman's lab. The remainder of his current crew at the time were killed off and Durant ended up dragging Darkman about the city from his helicopter while firing grenades at him. In the end, Darkman hooked the helicopter's crane cable to a truck as it was about to drive into a tunnel, dragging the helicopter behind it and causing it to crash into the tunnel wall, seemingly killing Durant.

Darkman II: The Return of Durant

Despite his apparent death in the first film, the direct-to-video sequel shows that he survived the crash and was instead rendered into a 878 day coma. When he awoke, he found his empire fledgling due to the ineptitude of his crew during his absence. To regain control of the black market gun trade, Durant had decided to provide a new weapon all together, more powerful than any conventional firearm. He broke out a weapons scientist named Dr. Alfred Hathaway from a state institution for the criminally insane. Durant was interested in a project Dr. Hathaway was developing before his arrest, an air cooled semi-automatic particle beam weapon. He accepted Durant's proposal on the condition that they found a building with a surplus of power, as the prototype model ran on conventional electricity. Durant assured the professor that he would provide the necessary assets.

Durant found a perfect location for a factory, an inner city power plant. The only obstacle was the current owner Dr. David Brinkman, who was using the place as his lab. He attempted to buy the property, but Brinkman refused to sell.

A few nights after the monetary offer, Durant and his crew visited Brinkman with the intention of pressuring him into selling; Brinkman didn't give in and attacked the criminals with a homemade laser device. Durant had his cronies brutally torture Brinkman to death. The next move was to attempt to offer Brinkman's sister Laurie one million dollars for the property, which she agreed to. However when the day came to sign the deed over, Laurie refused upon hearing Durant's name. They then moved to force her cooperation, but she was aided by one of Durant's lackeys . They managed to capture Laurie and discover that the person helping her was none other than Peyton Westlake in disguise.

With the building, Hathaway produced several of the particle rifle's they had dubbed "The Vigilante", and arranged the sale of these weapons to a Neo-Nazi vigilante group in hopes of wiping out all other competition in the city. Knowing Darkman was after him, Durant grew paranoid and decided that the only way they could continue without trouble is if Westlake was dead. So he decided to use Laurie as bait to lure Darkman into his grasp, then he would kill them both. He was right when he discovered Darkman attempting to poison him with pills that can quickly dissolve his stomach inside out. Durant came close to reducing his nemesis to ashes with the new weapon, but he demanded that he have one of Laurie's fingers and all ten of Darkman's. This threw Darkman into a rage and though a destructive series of events, Durant's crew, Dr. Hathaway, and the Neo-Nazi's were killed. Darkman then finally trapped Durant in his car and killed him with a remote controlled car bomb.

Darkman VS Army of Darkness

Durant returns as the secondary antagonist in the 2006 Dynamite crossover Darkman VS Army of Darkness.

After his death at the end of the second film, Durant's remains were buried at Wyld Wood Cemetery on the outskirts of the city. Some time later, Julie Hastings (who has become possessed by the Necronomicon Ex-Mortis), makes her way to Wyld Wood Cemetery in order to raise the dead to increase her army. As the corpses rise from their graves, Julie turns her attention to the grave of Robert Durant. Remembering what an imposing figure he was, she decides to "enlist" him as her Lieutenant. She then resurrects him as a powerful Deadite, and, offers him a chance to kill his nemesis Darkman in exchange for his servitude. He happily agrees. Durant and Julie (who now refers to herself as the Queen of Darkness) make their way to an abandoned construction site that (ironically) belonged to Julie's short time lover Louis Strack Jr. She then uses her magic to begin building a temple to serve as her new headquarters. While she is doing this, she explains the different types of Deadites and how intoxicants or trauma can make the living more susceptible to the transformation.

Durant decides to test this by bludgeoning a captured security guard in the face with a golf club. To his amusement, the guard transforms into a Deadite. Soon after, an army of Deadites proceed to cause chaos throughout the city. While this is going on, Durant and some followers, take it upon themselves to take over a TV 7 television studio with Durant serving as the "special guest" of AM Good Morning news broadcast. Seeing the broadcast from his lair, Darkman, and an interdimensional Ash Williams, team up and break into the station with Ash slaying various Deadites while Darkman confronts his nemesis. A brawl breaks out, with Durant and Darkman fighting on equal ground. Eventually, Durant gets the upper hand, but before he can make the finishing blow, Darkman is saved by the timely intervention of Ash who proceeds to shoot Durant in the chest with his shotgun. However, Durant is unfazed and nonchalant, so he quickly regenerates. Seeing this, Ash grabs Darkman and flees with Durant cursing both men as cowards and commenting that the city was his again. Amidst the chaos, the mayor and other officials are turned into Deadites, putting the city in the control of the Queen of Darkness. Back at Darkman's lair, Brynne, Julie's friend and associate, finds possible spells in the Necronomicon that could reverse the spells cast returning Julie and others to normal. It is then that the heroes plan an attack on the temple.

Back at the temple, Durant is seen interrogating a former henchman named Barry over the location of Darkman. When Barry states he doesn't know where Darkman is, Durant breaks his neck with his bare hand. Immediately afterwards, Barry resurrects as a Deadite. Noting that Barry cannot lie to him now Durant once again asks where Darkman is and, once again, Barry says that he doesn't know. Believing that Durant killed him for nothing Durant corrects Barry by saying that he is going to be working for him again. He then states that he and the Queen are not to be disturbed. Around this time the heroes invade the temple, and despite taking out numerous Deadites, they are seemingly captured. In the midst of wooing the Queen, Durant is interrupted when the heroes are brought forth. This turned out to be a trick as it was Deadites made to look like the heroes. Using smoke grenades as a distraction Ash and Darkman attack the Deadites while Brynne reads the exorcism spell from the Necronomicon. Berating his men for their weakness, Durant is surprise attacked by Darkman who proceeds to beat him into submission. While this is going on Darkman and Ash finish the incantation. The Queen of Darkness is then ravaged by dark energies and ultimately Julie and the other possessed humans are restored to their normal selves. While this is happening the dead, including Durant, agonizingly shrivel into dust. 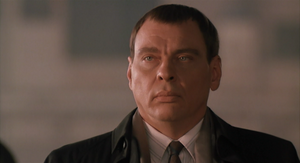 Durant meeting up with Eddie Black. 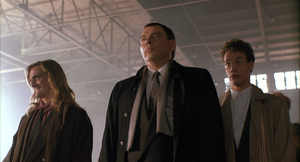 Durant with his gang of thugs. 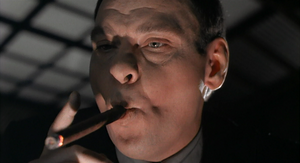 Durant and his men confronting Dr. Peyton Westlake in his laboratory. 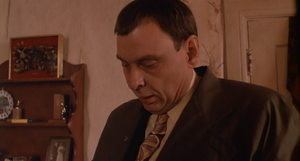 Durant searching the apartment of his henchman Pauly, before killing him. 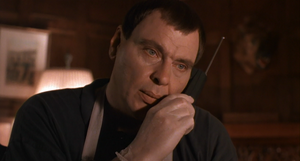 Durant on the phone to one of his associates. 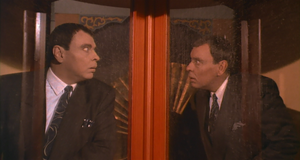 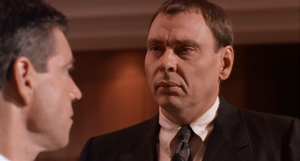 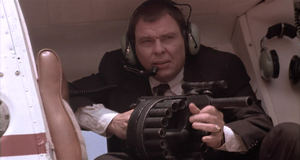 Durant attempting to kill Darkman from his helicopter with a grenade launcher. 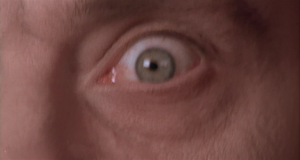 Durant staring in horror as he realizes his helicopter is about to crash. 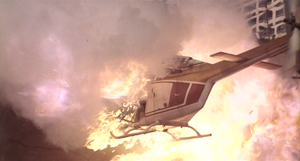 Durant perishing when his helicopter crashes into a tunnel wall. 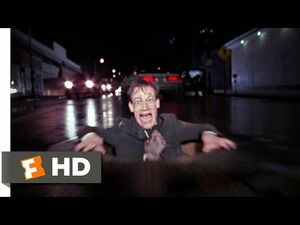 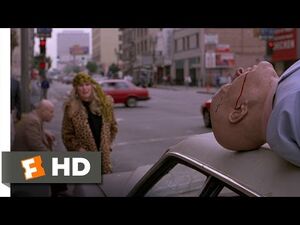 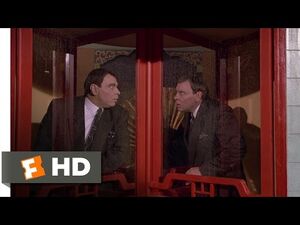 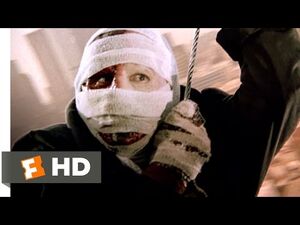