Robert Klingher is the eponymous main character of the 2015 American coming-of-age supernatural comedy horror movie Clinger (also known as "The Stalking Dead" in Germany). He is a love-stricken teenager who was the driven high school senior Fern Petersen's boyfriend (for a month and 3 weeks) later turned into her living nightmare when he returned from beyond the grave as a crazed and angry love ghost and he would stop at nothing to make her his one and only someone, even it kills her.

He was portrayed by Vincent Martella, who also played Gregory "Greg" Wuliger in the period sitcom Everybody Hates Chris based on the troubled teenage experiences of comedian Chris Rock during the 1980s.

Born in the year 1996 and raised in Houston, Texas, the 18 year-old Robert Klingher soon came to the lovely Fern while she fell over a hurdle fence and dislocated her left shoulder as she was practicing her track and field running and was about to break her PR. Fern needed Robert to pop the bone of the shoulder in a slow and steady pull directly away from her body without any sudden movement. He successfully did popped her shoulder in. After that, the two became quite acquitted and began dating.

After that romantic sunny Friday picnic Robert Klingher planned for each other, the two teens formed an official relationship as boyfriend and girlfriend, although they have not had sex for they both wanted their first time to be perfect. For a whole one month (and later to one week to third week), the relationship for Fern Petersen has become slowly bit rocky as Robert becomes overly affectionate towards her alone; he gives her so much sweet gifts including a red seemingly plastic teddy bear with big teeth that repeatedly says "I love you very much" in a cringey male voice, he constantly takes pictures of both him and her together (though she slowly tired of the pictures with Robert being too close to her). Another gift he later present a creepy picture of what their "dream child" would like he made on the Internet once they began to have a family in the future (which will never happen). This, much to Fern's pity and disgust, was a tipping point in which the young woman's relationship with Robert becomes very sour. Later the next day at school, Fern and her very Christian best friend Moellyn "Moe" Watkins with a thing for Eskimo-kissing (pressing the tip of one's nose against another's which is loosely based on a traditional Inuit greeting called a "kunik") soon discovered her locker was fill with magenta rose flowers and a love letter (complete with the cutout picture of both Robert and Fern with repulsively big smooching lips) saying Robert loves (with a heart shape) Fern FOREVER!". That would be seriously the last straw that broke the camel's back.

While Fern consults with both her best friend Moe and her entrepreneur sister Kelsey over the Robert Klingher situation, Robert was currently working on his another gift to Fern at the backyard of his house, a red 3-stair step double-guillotine contraption with the banner that says "I LOVE YOU FERN!". His parents, Eugenia and Arthur Klingher, finds this new gift to Robert's girlfriend quite dangerous indeed.

Later the next the night, Fern Petersen came to the Klingher residence at the request of her all enamoring soon-to-be ex-boyfriend Robert and walks into the house after the too obvious pink note with 3 magenta heart shapes on the front door that reads "Come inside. I'm waiting.". Fern came to see Robert playing his "Fern" song on a piano within his family's living room that was decorated with so much all white fairy lights/Christmas lights, red fluffy-looking paper-mache lines hanging from the ceiling, and flowers. He even gave her a pink teddy, while he continues singing the song until the end. Robert then takes Fern out into his parents' backyard now highly decorated with fairy lights for this romantic evening. When Fern tries to tell Robert something, Robert, while getting his "love" guillotine ready, foolishly claims he knows what she is going to say, for he has been wanting to say something for a longest time. As he begins to kneel down and holds the rope to his guillotine, he shouts "Fern Petersen, I love you!" before Fern herself quickly says "I think we should break up" and Robert accidently fell off his knees at the sound of Fern's last words to him and says "Wait, what?", while letting go of the rope and placing his head at the left-side bottom of the frame, positioning the neck directly below the one of the 2 heart-styled blades. The blades are then released along with the signed banner at the top of the frame, both quickly falls down and the second blade decapitates the boy with a single, clean pass as the head falls into one of the baskets below filled with pink confetti. The head of the now late Robert Klingher hits the left side of the guillotine and fell onto a bloodied Fern Petersen's hands and the girl screams at it in pure shocking terror, for this whole nightly romantic evening planned by the love-sick boy turn into a fatal and embarrassing accident.

Return from the Dead

One week later, signs of Robert Klingher's sudden return from the dead began to manifest that night: Fern Petersen's macaroni and cheese with bacon bits on her dinner plate (with the the "FU" bacon bits letters meant to prevailingly keep her sister Kelsey's obnoxious Adonis-like boyfriend Dead away from her) suddenly later changed to a heart shape, and then the haunting melody of Robert's "Fern" song started playing on her stereo, especially after she turns it off. And then she ran to her bathroom to wash her face and all of sudden, she sees in the mirror the bloody ghost of Robert for one brief moment and screams before he disappeared.

After learning lessons and answers from her gym coach and retired ghost hunting expert Ms. Valeria Kingsley (who refused to do ghost-hunting anymore), Fern decided to give it a try & began to flip upside down & chanted the late Robert Klingher's name 3 times in order to summon and prove it is not all in her head.

He later leads a band of 5 restless spirits including the ax-wielding murdered ex-wife named Temperance Baker. He weaver he later decides to let fern go after realizing he loves her enough to let her live after she convinces him they can't be together despite her falling in love with him after he became  less clingy and stopped smotherin her and her regretting breking up with him after he died. 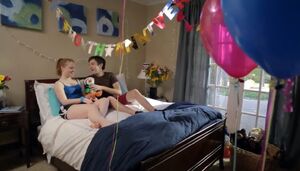 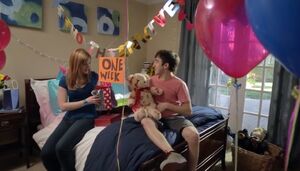 "Happy 1 Month and One Week Anniversary!" 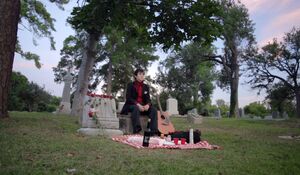 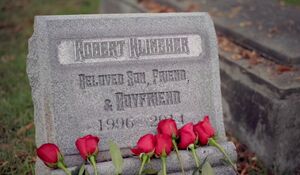 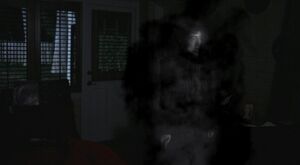 Robert Klingher, now as a ghost.
Add a photo to this gallery

Retrieved from "https://villains.fandom.com/wiki/Robert_Klingher?oldid=4107389"
Community content is available under CC-BY-SA unless otherwise noted.