Give Clarke to Danik in exchange for safety.
Kill Clarke for getting him and his crew on Tau Volantis (all failed).

Captain Robert Norton is a major antagonist in Dead Space 3. He is the leader of an EarthGov battalion tasked with stopping a Unitologist terrorist attempting to overthrow the Government. Norton is also part a group that is investigating the mysterious Markers and the necromorphs they produce. Norton along with EarthGov sgt. John Carver are tasked with retrieving Dead space Protagonist Isaac Clarke for his expertiese in dealing with the necromorph threat.

Norton initially serves as an ally helping Isaac and the rest of his crew travel to Tau Volatis to find a way to destroy the Markers forever, but his jealousy of Isaac over his previous relationship with Ellie causes him to backstab the entire group.

He was voiced by Robert Gant.

Norton, accompanied by John Carver, locate Clarke on the New Horizons Lunar Colony. They infiltrate and subdue the engineer, Carver holding Isaac at gunpoint. Norton demands Isaac's expertise in a mission involving the Markers. Following Isaac's refusal, Norton persuades him by telling him Ellie Langford requested he find him. When he explains she's missing, Isaac grudgingly accepts the task and the three set out through the streets of the Lunar Colony.

As Unitologists overwhelm them in an attempt to murder Issac, a suicide bomber destroys their car, separating Norton and Carver from Issac who lands in the sewers below. Norton and Carver fight to regroup with their target. Not long after another Marker site is revealed and another Necromorph outbreak triggered (by Jacob Danik), Norton and USM Eudora arrive to extract Isaac from the top of a train and shock out of the system. With the three on board, Norton plotted a course for barren ice planet, Tau Volantis.

Arriving in the planet's system, Norton and his crew discover the remains of Sovereign Colonies warships, with an SOS signal transmitting from the CMS Roanoke. Moving closer, the Eudora strays into a minefield, and sustains heavy damages. Isaac goes to acquire a EVA Suit while Norton and Carver seal off a ruined doorway. The destruction of the Eudora hurtles the group into space through the debris field. Norton and Carver guide a boxlike container holding Rosen and Locke through the debris toward the distress signal.

Guiding the box into a cargo bay in the Roanoke, Norton and Carver stay behind to open the box and release Rosen and Locke while Isaac searched the ship for Ellie. His crew is eventually ambushed by an ancient swarm of Necromorphs that were sealed in the abandoned ship for two centuries.

They narrowly hold the monsters off and barricade the room while Issac restores power to the ship. Norton and Carver arrive at the sealed room moments after Isaac, finding Ellie, Jennifer Santos and Austin Buckell unharmed. Overjoyed to see her, Norton embraces and kisses Ellie. Assuming the mission complete, Norton declares they're all leaving, but Ellie tells him otherwise. She believes there is something important in the admiral's quarters that needs investigating.

Discovering a decommissioned shuttle, the CMS Crozier, Norton once again tries to persuade Ellie into leaving Tau Volantis, but she remains determined to see her mission through. Frustrated, Norton contacts Issac privately, imploring the engineer to get Ellie to see reason. He exposes his jealousy to Isaac, reaffirming that Isaac and Ellie's relationship is over and she's in love with him. Once the Crozier is repaired, the crew make a break for the planet. The debris field quickly damages the shuttle, shattering the windows and igniting the ship as it plummets into the atmosphere. The shuttle splits apart, separating Isaac from the others.

Norton and the team search for shelter from the freezing environment of the planet. They manage to find snow suits, but there are only enough for Norton, Ellie and Santos. They forced to leave an injured Buckell behind when he refuses a snow suit. Norton and the others make their way to a research facility wherein they are attacked by a swarm of Necromorphs. At one point Norton contacted Danik and offered him a deal where Norton would allow Danik to kill Isaac in exchange of a spaceship so that the rest of the crew could leave Tau Volantis.

When Isaac reunites with the group, Norton openly questions Ellie's feelings for himself and Isaac which almost results in open conflict between the two men. On the way to the warehouse complex, the group is attacked by Danik's men and separated from Isaac again. Norton remains dubious of the team's efforts to find the Codex and its corresponding the machine, citing their knowledge on the device no greater than his own.

During their examination of the Nexus corpse, Norton begrudgingly helps aids in search for the Marker signal within its body; he lowers Isaac down into the opening of the creature's body. The experiment is a success, Santos manages to locate "a thousand" signals beneath the planet's surface. The only way to reach the signals is to climb to the second dig site further up the mountain.

Norton waits until Ellie and Santos head off to set up the climbing gear before he leaves Isaac trapped in the elevator. He is determined to take control of the mission and "save" Ellie. However, Norton and Carver are ambushed outside the complex by Danik and his followers moments before Isaac joins them. Danik reveals that Norton was the one who contacted the Unitologists.

When Danik decides to kill them, Norton rebels; the leader is going back on his promise to allow Norton and the others off-planet if Isaac was captured. Isaac intervenes, preventing Danik from executing Norton. The three engage in combat with the Unitologist soldiers until a Nexus appears. Carver and Isaac manage to keep Norton out of danger, almost at the expense of Isaac, who is nearly devoured by the creature. Isaac kills the Nexus from within its body; after he escapes, Norton attacks him in a fit of rage. He blames Isaac for dragging them to the planet and tries to kill him. Isaac reacts in self-defense, shooting Norton in the head with a Unitologist pistol. Carver retorted that they needed to leave Norton's corpse behind as "he won't stay dead for long".

Norton makes a brief appearance in the Dead Space 3 DLC Awakened, appearing to Clarke and Carver as a hallucination before revealing that he had become a Necromorph as Carver suggested before, meaning Norton suffered a fate worse than death after his death. 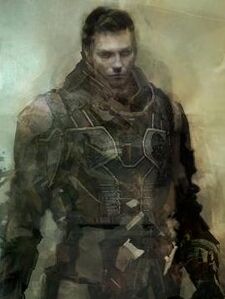 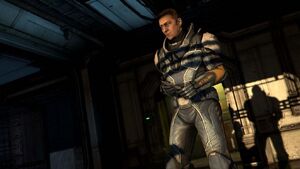 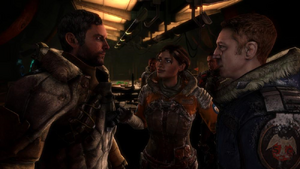 Issac and Norton confront each other. 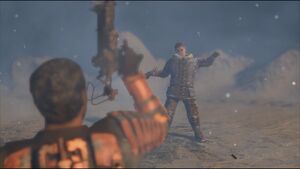 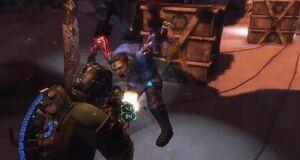