Robert Tubbs is a recurring protagonist and anti-hero in the Family Guy spin-off series The Cleveland Show. He is Donna's ex-husband and the biological father of Roberta Tubbs and Rallo Tubbs. He is known to have a bitter rivalry with Cleveland Brown since high school in terms of winning Donna's heart, and at times to win Cleveland Jr.'s affection.

He was voiced by Corey Holcom.

When he was ten years old, Robert gets a Japanese import record of the music of Dee Dee Tubbs, after trading his dad some weed for it. He listened to her music, while high on some of the weed he kept for himself, and fell in love with her. This is the only insight we have to Robert's father, but this much information makes it prevalent that he had a poor upbringing as his father is a lot like the father he turned out to be.

Robert went to Stoolbend High School with Cleveland Brown and Donna Tubbs. Robert fell in love with Donna and after saving her from drowning in a mall fountain, she fell in love with him and started going out with him. Robert and Donna dated all throughout high school and graduated together and eventually got married.

Marriage to Donna and Divorce

Robert got married to Donna and had two kids with her, Roberta and Rallo. During all their time together, Robert was a very terrible father and husband. He neglected his kids, behaved inappropriately in front of them, left a bad influence on them, cheated on his wife, mistreated her, and pretty much failed to do any real work as a father. However, Donna still stayed true to him and tried to keep their marriage going. Despite him being the one who did everything wrong, Robert was the one who divorced Donna, after she caused them to fail a couples dance contest back in 2002, when they themed their dance after 9/11.

Robert has appeared since the "Pilot", where he collects alimony checks from Donna, although he plans to take her back. Robert also proves that he knows little if not anything about his two children (Roberta and Rallo) thinking that Roberta is still in the 6th grade. Cleveland manages to stop him just in time and successfully wins Donna's heart, leaving Robert to flee.

In "Da Doggone Daddy-Daughter Dinner Dance", Robert doesn't show up to Roberta's father-daughter dance because he chose to do drugs instead. Throughout the rest of the series. Cleveland proved to Roberta that he was a better father by coming to her dance and spending time with her and live life on his own.

After long being off the radar, Cleveland was eventually able to track down Robert at a strip club in "Tis the Cleveland to be Sorry", where he told him about how much Rallo misses him. In a bittersweet Christmas miracle, Robert came to The Brown-Tubbs House that Christmas, dressed as Santa Claus to visit Rallo. When Rallo asked him about his long absence, Robert quickly made up the lie, that he was Santa Claus and Rallo believed this. Robert lying about being Santa also got Rallo to turn against Cleveland, as he was previously pretended to be Santa to lift Rallo's spirits.

Robert is an adult African-American man with a puffy black afro and an unshaven beard of light stubble. He wears a yellow jumpsuit with a green collar, green sleeve collars, and a green trim. Additionally, Robert wears matching yellow pants, a red undershirt, red and white sneakers, and white diamond earrings.

Robert is a selfish, lazy, unemployed bum, who relies solely on his ex-wife's alimony to survive and refuses to make any effort to get a job. Robert spends most of his time, smoking weed, going to strip clubs, and stealing things. Robert's history of theft has led him to constantly being on the run from the cops. With this much stuff going on in his life, he barely has any time to visit his kids. Even when he does have the time for them, he generally doesn't care enough about them to visit them and would much rather do drugs instead. 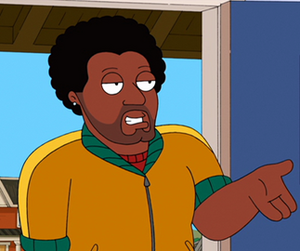 Robert visiting his ex-wife for his alimony check. 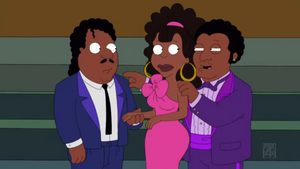 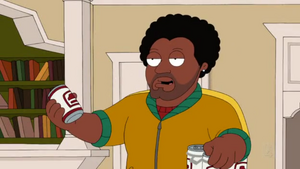 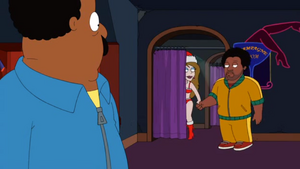 Robert at the strip club. 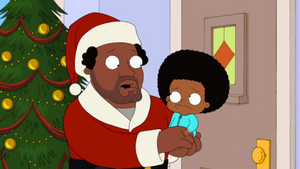 Robert lies to Rallo about being Santa Claus. 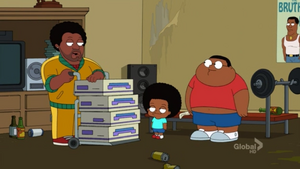 Robert teaching Rallo and Junior about how to steal DVR boxes. 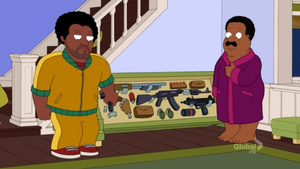 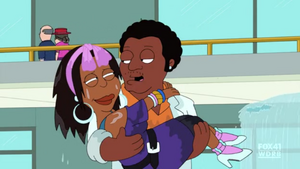 Robert saves Donna, making her fall for him. 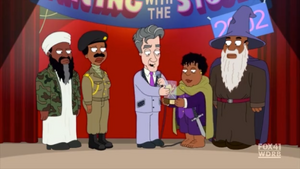 The moment that made Robert divorce Donna. 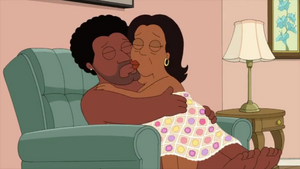 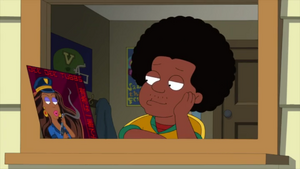 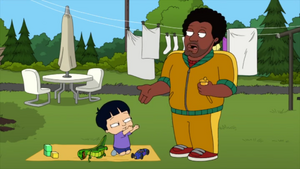 Robert portrayed by a celebrity impersonator.

Robert's cameo in the Family Guy episode "No Giggity, No Doubt".