Killing young women and putting their bodies inside plastic bags.

Kill Kale Brecht and frame him for his crimes in order to not be arrested by the police forces on his killings.

Kill Kale's mother, his best friend Ronnie, and his own love interest Ashley (both failed).

Robert Turner is the main antagonist of the 2007 live action film Disturbia. He is a serial killer who likes to kill young women and put his victims' bodies inside plastic bags.

He was portrayed by David Morse.

Turner is a middle aged man who lives by himself in a relatively big house, loves his garden and lives a seemingly ordinary life. However, he is secretly a serial killer who enjoys bringing young women to his home, seducing them and then killing them. He is also highly sadistic as shown when he forced Kale to write a suicide letter to his girlfriend after capturing him.

No one suspects Turner until Kale Brecht is put under house arrest for punching his teacher. Not being allowed to leave his house, Kale begins to notice the people in his neighborhood, including Turner, his next door neighbor. Kale's suspicions are raised when he notices that Turner's car has a dent in it, after previously reading that an unknown serial killer owned a dented car.

Soon after, Turner has the dent removed. Kale continues his investigations with his friend Ronnie Chu and his new neighbor Ashley Carlson, continuously spying on Turner with the use of binoculars and camera equipment, and eventually discovers a body bag hidden in a vent inside Turner's house. Turner, aware of Kale's spying, eventually knocks his mother unconscious and hides her in the basement of his house. He then enters Kale's house and tries to incapacitate him with a baseball bat. After a short fight, Kale races out of his house to try and set off the alarm on his ankle, but Turner stops him by knocking him out cold with a blow to the head.

Kale awakens to find himself bound and gagged in his own bedroom, with Turner sitting beside him. Turner removes the evidence Kale had captured of the body bag before telling him that he's going to pin the blame on Kale, since he is already under house arrest and will therefore be the obvious suspect. Just as Turner is about to force Kale to write a suicide note, Ashley appears and distracts him, giving Kale time to knock Turner down before escaping with Ashley into her swimming pool. Ashley then goes to contact the police while Kale rushes over to Turner's house to look for his mother, armed with a pair of gardening shears.

Inside Turner's house, Kale finds many rotting corpses behind vents and other small crevices, eventually finding a secret entrance to the basement. Meanwhile, Turner hides in the house as a police officer appears, searching for both Turner and Kale. Turner appears behind him and breaks his neck. He then goes to the basement himself, and just as Kale finds his mother and cuts her free, Turner finally loses his temper and attacks him. After another brief struggle, Kale manages to stab Turner in the chest with the gardening shears in a fit of rage before ramming him into a pool filled with the corpses of his victims. 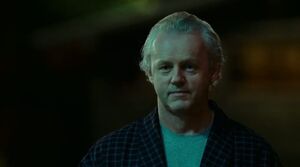 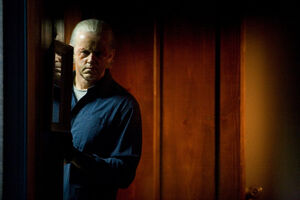 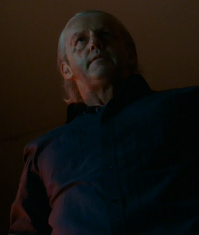 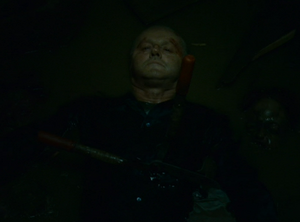 Turner after being stabbed with gardening shears by Kale.