Robert Zabrinski is one of the supporting antagonists of the videogame Scooby-Doo! Mystery Mayhem, alongside Walter Peabody and Mindi Stiles. To buy the Milton Brothers Movie Studio, he impersonated the Red Knight.

The group split up and looked around. One of the Milton Brothers went missing, and a brochure to a theme park was found. The Red Knight kidnapped Scooby-Doo and Daphne Blake, after they managed to get rid of several Poltergeists he had summoned. However Shaggy Rogers managed to rescue them, and defeated the Red Knight temporarily by luring it onto a catapult.

The group and the other Milton brother set up a trap for the Red Knight, who was revealed to be Robert. He explained that he was trying to buy the studio, but the brothers refused, so he dressed up as the Red Knight to scare them and workers away. Using two pages from the Tome of Doom he got from Walter Peabody he summoned the Poltergeists and the Mummy's to help him.

The missing brother was found wearing a mummy costume saying that Robert locked him up after he witnessed him wearing the Red Knight costume. 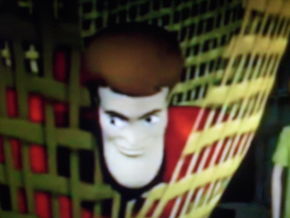