Commander of the Crusader Army

Grand Master of the Knights Templar

Destroy the Assassin Order (failed).
Take over the World (failed).

Robert de Sablé is one of the two main antagonists along with Al Mualim of the videogame Assassin's Creed. He is the Grand Master of the Templar Order and the commander of the Crusaders during the Third Crusade. He is Altaïr's ninth target, and he is also a lieutenant in the army of King Richard the Lionheart.

He was voiced by Jean-Philippe Dandenaud.

Robert de Sablé was the Grand Master of the Knights Templar, and he therefore had a similar goal to that of the Assassins. They both want to end the war in the Holy Land. The Assassins have no objections against his goals, but against the way they try to reach their goal. The Templars tried to force their "peace" upon the citizens, while the Assassins want the citizens to find peace themselves. Altaïr first encounters Robert at Solomon's Temple, in the beginning of the game. There lied the piece of Eden which the Templars want to use to enslave mankind. However, the Assassins escape with the piece of Eden, and Robert and his army attack their hometown, Masyaf. The attack fails and Robert decides to find other ways to conquer the Holy Land. While his Templar "Brothers" were assassinated, he convinced King Richard to join up with Saladin and destroy the Assassins that way. King Richard only believed Altaïr's good intentions when he killed Robert de Sablé, claiming that "God was on his side".

Robert was an arrogant and manipulative individual, who was able to recruit various members to the Templar cause by offering them power in the New World. At the same time, Robert gained King Richard's trust, despite secretly plotting his downfall.

However, due to his disregard for the Templars' rule to not consort with women, Robert was not held in high regard by all of his fellow Templars, among which was his own successor, Armand Bouchart.

Robert's portrait for the "Great Minds of History" series 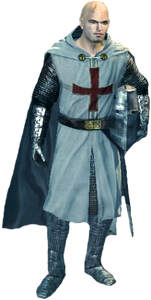 Robert with his helmet 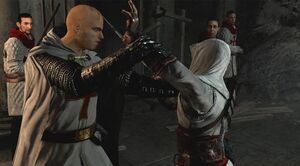 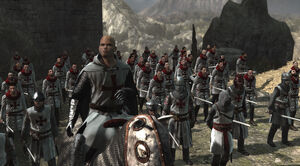 Robert during the siege

Robert and King Richard at Arsuf

Altaïr facing the illusions of the Nine, with Robert among them
Add a photo to this gallery 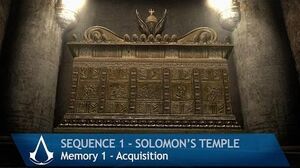 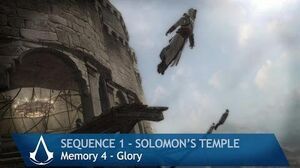 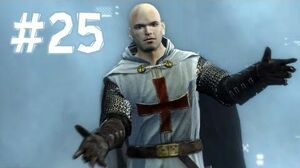 Retrieved from "https://villains.fandom.com/wiki/Robert_de_Sable?oldid=4089706"
Community content is available under CC-BY-SA unless otherwise noted.