The Pirates Who Don't Do Anything: A VeggieTales Movie

Reading the longest novels he can find.
Eating the perfect meal at any fine restaurant.

Kidnap and kill his nephew and niece, Eloise and Alexander.

Robert the Terrible is the main antagonist of the 2008 Universal and Big Idea Studios film The Pirates Who Don't Do Anything: A VeggieTales Movie. He is the younger brother of the King of Moteria, and uncle of its prince and princess, Alexander and Eloise.

Robert is a dastardly, cruel, power-hungry gourd whose objectives throughout the movie stem from wanting to take over Monteria as King. This is because he found it atrocious that his brother was using his influence for the sake of everyone in Monteria barring the Royal Family, seeing his brother's generous acts as 'squandering' the wealth his family had on 'strangers' and 'peasants' and even mockingly imitates his brothers when he stated they should 'feed the poor' and 'help the sick' along with widows and orphans, showing that he is unsympathetic to his former subject's plights and appeared to be quite egotistical about his former royal status. This prompted him to try and take the throne by force, only to fail.

He also wanted to destroy three Veggies: Elliot, George, and Sedgewick, respectively played by Larry the Cucumber, Pa Grape and, Mr. Lunt. However, since they came from the future, not the 17th century, he didn't know about them until the King was almost returning, so killing them was never going to be as easy as he thought. Robert was banned from Monteria for years, giving him nothing to do except "dabble in the mechanical arts". In his exile, he built his Barrel-Robot Carrier and used Black-Powder to make highly powerful explosives.

Robert is also quite vengeful as he tried to do away with Elliot, Sedgewick, and George for foiling his scheme.

Robert first appears when he arrives on one of his ships to kidnap Prince Alexander, with the latter telling him that his banishment was well-earned. He proceeds to kidnap Alexander with the rest of the soldiers afraid to do anything because of Robert's menacing presence, and eventually takes him to his lair.

Eventually, he reveals to Alexander that he wants to become the new King of Monteria, and tells him about his hatred for the current King (Alexander and Eloise's father). Soon, he gives Alexander a demonstration of the King's would-be death, with two pirates shoving an inanimate figure resembling the King into a small boat which runs over a black powder explosive underwater, blowing up the boat as well as the figure.

Robert then tells Alexander that he can't leave his ships waiting for the King's return or his own ships would be blown up, so he angrily demands Alexander when the King will return. The latter says that the King didn't say, but refuses to tell him even if the King did say. Then, Princess Eloise, who was just kidnapped by Robert's henchmen, arrives in the lair. Robert then puts an hourglass with a signal on it which he set to two hours, saying that when the sand runs out, he will kill both of them. Willory, Eloise's loyal protector and butler, played by Archibald Asparagus, is also revealed to be imprisoned.

Two hours later, the sand in the hourglass runs out, but Elliot, George, and Sedgewick are able to enter the lair and free Alexander, Eloise, and Willory just in time. However, the prison guard rings a bell, and Robert enters. Eloise tells Robert that the King sent Elliot, George, and Sedgewick to undo his plans. Robert then questions the three when the King will return, or else he is going to kill Alexander and Eloise. The three heroes start to feel as if there is no hope, until George looks up to the ceiling and gets an idea.

He cuts the rope holding the chandelier on top of the ceiling, causing it to smash into Robert's face and knock him off of his mechanical body. However, Robert is able to get on it again, and continues to pursue the heroes, who escape to a boat summoned by a device the King made, the Helpseeker. However, Robert and his men get on a big ship, and try to fire cannons at them to kill them. However, the King unexpectedly returns, and fires two cannons at Robert's ship, causing it to sink, with Robert to angrily tell him that he will never be finished until he becomes the new King, even raising his fist out of the water, before sinking. With that, the King rewards Elliot, George, and Sedgewick for their heroism.

The three heroes then use the Helpseeker to return to the present day back to their ordinary jobs at their restaurant as cabin boys, completely unaware that Robert used his metal claw to latch onto their boat. He interferes at the pirate play in the restaurant and tries to murder the star of the show, Sir Frederick, thinking it was George. However, the three heroes show up again, and duel with Robert. George is able to use the Helpseeker to cause the boat to fall onto Robert and then uses it to send the boat and Robert back to the 17th century.

In the song Rock Monster, it is revealed that Robert is imprisoned in a cage on a deserted island, despite still having his mechanical suit, happily dancing in the cage while listening to the song. 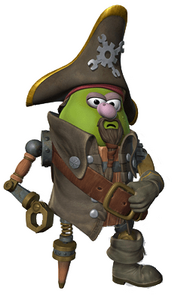 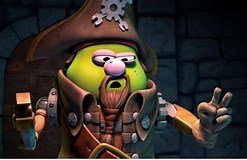 Robert in his lair.