Roberta Beliard is the main antagonist of the Season 2 premiere episode "Everything's Coming Up Lucifer" from the TV series Lucifer.

She was played by Rusty Schwimmer.

Roberta Beliard is a nurse who was secretly a drug dealer, stealing drugs from the hospital she worked at and selling them to actress Amy Dodge. She introduced Jillian Taylor, who Roberta took in to her home, to Amy, leading to Jillian getting an acting job. However, Jillian was helping Amy get sober, and seeing as how Amy was Roberta's best customer, this hurt her financially. Enraged, Roberta killed Jillian with a pair of rods; plunging them through her head to resemble devil horns, and attempted to frame another drug dealer for the murder.

Once Lucifer Morningstar confronted Roberta, the villainess attacked him with a steel poker, and continued her attack even when Chloe Decker was at the door. Roberta venomously admitted to killing Jillian and voiced her anger over Jillian ruining her business, and was later tased by Chloe before she was arrested. 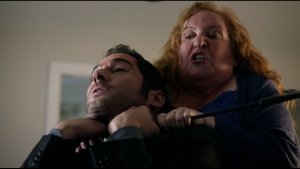 Retrieved from "https://villains.fandom.com/wiki/Roberta_Beliard?oldid=3608048"
Community content is available under CC-BY-SA unless otherwise noted.