Roberto is a villain from the animated comedy series Futurama. He is a criminally insane manbot, serial bank robber, and an old friend of Bender's. He was built in 3001 by a team of engineers with a desire to build a completely insane robot. According to Roberto, however, "they failed!" Yet, he is still one of the most unstable and dangerous robots in New New York.

He was voiced by David Herman.

Roberto is a robot made by some engineers with the desire to build a criminally insane robot and they succeeded (but according to Roberto himself, they failed).

He is one of the most mentally unstable characters in the series, often practicing stabbing moves with his knife while making 'stabbing noises' and he has also tried to rob one bank thrice in just a short period of time. He is also an old friend of Bender.

Roberto's history is largely unknown, however, in "Bender's Game" he reveals he was built by some engineers who wanted to make an insane robot. He says they failed, but from the view of everyone else, it was a major success. According to Roberto's gravestone birth and death years.

According to the episode "The Six Million Dollar Mon", he was built 11 years prior. During "Insane in the Mainframe", he mentions that his mother used to weld him to the wall as a form of punishment.

To open Roberto, the player must construct The Knife's Edge which is the first prize in the Week 4 Prize Ladder. This building costs 175 Robot Soul and 3 MothMetal.png to unlock. The Week 4 Prize Ladder was accessible from the 26th of October after completing Part 9 of the Cost of Greed goal. Roberto can also be fully unlocked for 478 Pizza. 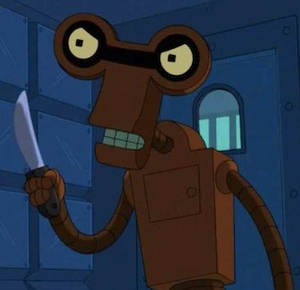 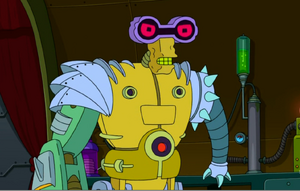 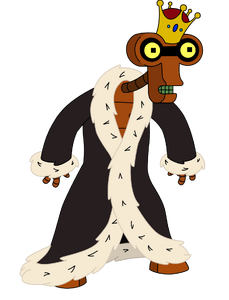 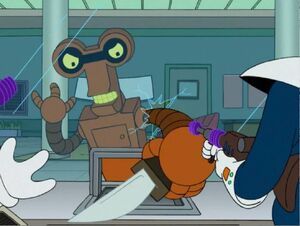 Roberto crossing the glass of the bank with his knife and trying to slash the officers. 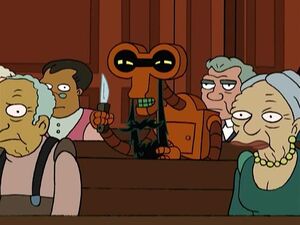 Roberto in disguise communicates with Fry in court, threatening death if he delated him. 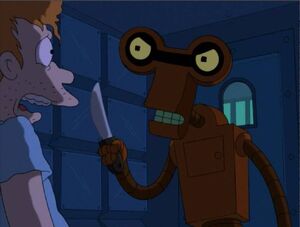 Roberto tormenting Fry and being his new mate's cubicle in the Hal Institute for Criminally Insane Robots.

Roberto practicing his stabs on Fry, causing him to lose his mental stability. 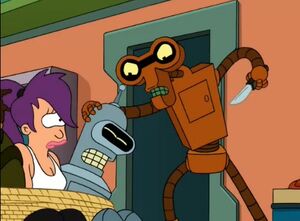 Roberto showing his razors on The Conrads.
Add a photo to this gallery

Retrieved from "https://villains.fandom.com/wiki/Roberto_(Futurama)?oldid=3940685"
Community content is available under CC-BY-SA unless otherwise noted.