Finish with the assigned tasks of its creator

Robo-Fortune is the creation of Brain Drain, the psychic director of ASG Lab Zero, and stands as a testament to her maniacal creator’s unmatched pride and petulance. Built to demonstrate loyalty and cunning, Robo-Fortune fails to deliver either to any measurable degree. Employing cutting-edge technology, she sets out to hunt down the Skullgirl, and to engage in easily avoidable conflicts.

Is a creation of Brain Drain, the psychic director of the Laboratory 0 ASG, and is a proof of the unprecedented pride and irritability of his maniac creator. Created to show loyalty and cunning, Robo Fortune fails to show either of them at a measurable level. Using cutting-edge technology, is launched to the pursuit of the Skullgirl and get into all kinds of conflicts that could easily avoid.

She was programmed to compete against Nadia Fortune and show that she was much more efficient than she. The scientist Brain Drain had built it, after having read the newspaper, carefully observing the notes of the "undead cat". Without caring, hated her for swearing to be effective enough. Then, an improved version of herself was born on January 31.

Proposing to give it to its creator, Robo-Fortune had told Brain Drain that she won the Skullheart defeating Marie by herself. Impressed, Brain Drain is then dedicated to the creation of a new generation of machines using the Skull Heart. His experiments give rise to an army of Giants Robo-Fortunes that, without a Skullgirl to hunt, give a turn to humanity.

Robo-Fortune is a zoner/keepaway character who uses her amazing mobility, Headrone special moves, and beam projectiles to keep the opponent far away and frustrate them to no end. She also has one of the most powerful assists in the game which makes her a useful teammate for any character in the game.

Headrones: Has her shoot out heads that follow Robo around. Each of her three 214K special moves will spend the heads. Headrone RAM (214LK) and and Headrone Impact (214MK) will use one head. Headrone Salvo (214HK) will use all the available heads, and powers up depending on the number of heads you have. Each of these moves cannot be done without at least one head. She can have up three Headrones out at once. Doing c.HK with three heads will still execute the move but replace a currently stored head. 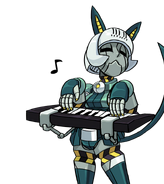 Robo-Fortune transform her body into chainsaw.