Somewhere in the space

The Robo-Pirates (also known as Henchmen and The Robo-Pirate Army) are the primary group of enemies in Rayman 2: The Great Escape, Rayman 2 Forever, and Rayman 2: Revolution.

This army of robotic pirates, led by the evil Admiral Razorbeard, came from somewhere in the space to conquer the Glade of Dreams. They use flying ships to transform and fight. Many of the ships also double as big flying prisons for captives. The most colossal ship, Buccaneer, is a base of operations where also Razobeard lives.

There are various types of Robo-Pirates, with different strategies, weapons and weaknesses. They usually wear typical pirate clothes (stripped vest and pants) and had one eye completely black, as if they have an eye patch. One of their arm is hollow - this is where they fire their bullets from. However, only some of Robo-Pirates looks like that.

At the very start of the game, they rushed into the Glade of Dreams and destroy the Heart of the World to weaken its citizens. Rayman himself is imprisoned and has to escape from the pirates and then begins finding and rescuing all his other friends. During his journey, he meets Robo-Pirates that try to stop him and Rayman has to destroy them. At the end, Rayman fights Razorbeard in Buccaneer and eventually destroy the ship. Razorbeard himself escapes in a flying saucer, but the rest of Robo-Pirates were probably destroyed with the ship.

Robo-Pirates' and Razorbeard's fate is revealed in the sequel to Rayman 2. Their deactivated bodies are seen in a secret chamber, hidden inside of a gigantic boiler in the Hoodlum Headquarters. The Robo-Pirates' positions behind a long table resembles Leonardo da Vinci's famous painting, The Last Supper, with Razorbeard in the place of Jesus. It is unknown if they are just statues or real Robo-Pirates that were captured and disabled by the Hoodlums.

Robo-Pirates are the major villains again in Rayman 3 version for Game Boy Advance. It is revealed that Admiral Razobeard is hiding somewhere in the Glade of Dreams, with a small group of surviving Robo-Pirates. They also appear as the main villains in Rayman 2 Forever and Rayman 2: Revolution which plots are similar to Rayman 2. They are also playable characters in Rayman M and Rayman Arena.

The most common type of Robo-Pirates in the game. They wear an earing on one side of their head. They also had one eye completely black, as if they have an eye patch. One of their arms is used to fire their bullets from and the second has a large hook. They sometimes hold swords. There are more types of Henchmen 800: basic, blue, green, purple, yellow, gray, gray-brown and zombie (see Zombie Henchmen).

An older version of the Henchman 800. They look similar to the newer ones, but with a retro design and a fake mustache. They also don't have a hook, but a normal hand, and they also wear a paper hat. They speak Spanish and their theme in Rayman M is country rock.

Old wrecked pirates who still walk. They wear pale and ripped clothes, have two black eyes and one of their legs is missing. They walk like zombies and don't shoot from their arm, but breath a green poisonous gas towards Rayman. It is difficult to destroy them, as they seem to be dead, but then get up again later. They appear only in Rayman 2: Revolution.

More dangerous and clever than the other Robo-Pirates. They are invisible until they are right in front of or behind Rayman. They fire bullets like typical Robo-Pirates, but they have unlimited heath. Their leader is Ninjaws.

The leader of Ninja Pirates. He looks identical to them and is Razorbeard's favorite servant, as in the PlayStation version of Rayman 2: The Great Escape, Ninjaws informs him that he had captured more than 5000 slaves. Razorbeard then orders him and his Ninja Pirates to kill Rayman. Ninjaws and Rayman then battle for the Second Mask and Rayman defeats him.

A type of Robo-Pirates, known for their similarities to a gorilla. They are fat, with arms much longer than legs. They wear a blue and white striped shirt and can't be hurt by Rayman's attacks. However, Rayman can lure them to a cliff where they fall down.

A type of Robo-Pirates, hidden in a large barrel, only with eyes and legs seen. They sometimes hide inside and look like a normal barrel. Their attacks are different in every game: firing three electric balls (PlayStation version of Rayman 2: The Great Escape) or firing bolts of lightning and launching cannonballs (Rayman 2: Revolution).

Razorbeard's minion who informs him and carries out his orders. He has normal hands without any weapons and wear typical pirate clothes. He usually controls other robots: a giant bird-like robot called the Robot Dinosaur and a hemispherical vehicle called the Boss Biditank. He also controls Clark with a remote control. He is also the one who angry Razorbeard often screams at. 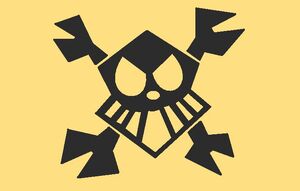 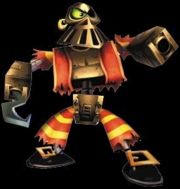 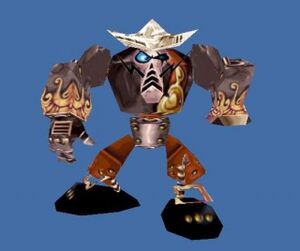 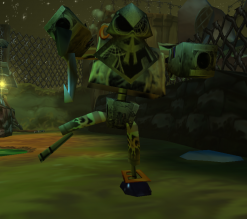 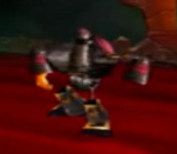 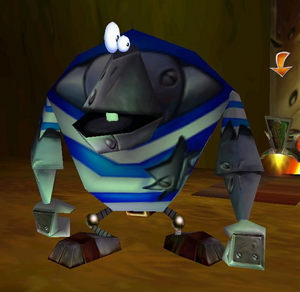 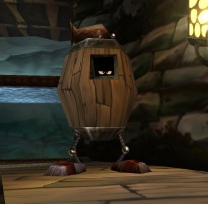 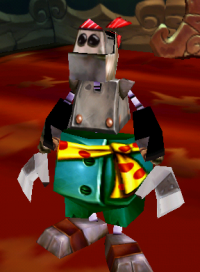 Add a photo to this gallery
Retrieved from "https://villains.fandom.com/wiki/Robo-Pirates?oldid=3794463"
Community content is available under CC-BY-SA unless otherwise noted.