Killing people to get Nuke

Get the Nuke drug and kill anyone who tries to stop him.

RoboCop 2 is the central antagonist of the 1990 film of the same name.

Depicted as a more advanced version of Bob Morton's RoboCop program that commenced not long beforehand, RoboCop 2 was intended to protect the people during the construction of Delta City and rid the city of Nuke. The development was overseen by Dr. Juliette Faxx, who chose the brain of a deceased fanatical drug lord by the name of Cain, rather than one of another deceased police officer.

Prior to the current cyborg, two droids were met with failure in an attempt to duplicate Bob Morton's success with the original RoboCop. Both attempts were using recently deceased police officers. One was a droid who removed his helmet, exposing his naked skull, then shut down. Another was a droid who remarked "You are under arrest" before shooting two scientists, then shooting itself as a red and blue siren blared on its back. Interestingly, this scene of a malfunctioning robot opening fire mimicked the bloodshed of ED-209 in the opening scene of the first movie.

It was later revealed that the reasons Murphy was able to survive the RoboCop process were twofold; his dedication to the law and the fact he was a devout Irish Catholic, in which his brain was telling his bodily systems they must stay alive as long as possible (prohibiting suicide). Realizing that policemen were not ideal subjects, Dr. Faxx turned her attention to finding a psychopath, as that might be a candidate for the RoboCop 2 program.

RoboCop 2's exoskeleton bears little resemblance to the almost friendly and familiar humanoid aesthetic of RoboCop. His body is twisted and monstrous, a beak-like slab of armor plating makes up his face. Floodlights, hinges, pistons and claw-like extensions adorn his body. One of his extensions is a plasma torch used for cutting. He has a minigun on his left arm with a retractable battling ram, and an assault cannon on his right shoulder. RoboCop 2 is truly a harrowing sight. Even worse, RoboCop 2 is just as hooked on Nuke as his past self and, most harrowing of all, Juliette Faxx has decided that this addiction will be the perfect way to control him, after the failures of the other test subjects.

RoboCop 2's first assignment is to follow Mayor Kuzak to his meeting with the mysterious individual who has stepped up to bale out the city from its colossal debt to OCP. He arrives on the back of a lorry, first disposing of the mayor's limousine and its driver, then proceeding on to the meeting proper. Apart from his armor and firepower, RoboCop 2 is also a tactical fighter, first shooting out the lights and plunging the chamber into darkness, then opening up with his minigun, wiping out everyone in the room, until he meets his apparent lover and henchwoman Angie.

Upon facing Cain's former lover, RoboCop 2 is compelled to react, opening his beak-like face to reveal a monitor with a rendition of his face on it. Angie caresses his brutal metal exterior, but, just as it seems as if RoboCop 2 is to be placated, he grows angry, wrapping a claw around Angie's face and head and viciously killing her. Cain's youngest minion, Hob, uses this moment to escape to the armored truck, but RoboCop 2's minigun pierces the armor and riddles Hob with lead, mortally wounding him. However, the mayor manages to escape by the skin of his teeth by sliding down a manhole.

Battle at the Civic Center

RoboCop learns from a dying Hob that Cain has become a cyborg, and he must stop him once and for all. The climactic battle between the two arch-enemies takes place at the Civic Center where the Old Man is giving a speech about cleaning up Old Detroit and building Delta City. The Mayor is late to attend, and grudgingly takes his seat as the Old Man continues, revealing the tool with which the streets will be cleansed. The Mayor sees to his horror that the machine is none other than murderous Robocop 2. However, all he can do is point, eyes wide, as the Old Man displays a large container of Nuke in his hand, saying it is the main cause of crime in Old Detroit. But something is distracting him. RoboCop 2 has also noticed the Nuke, and is in dire need of some. It begins to become violent, flattening the model of Delta City.

Things escalate when RoboCop enters the room, carrying a compact Cobra assault cannon with him. Cain immediately opens fire... but all he can muster is the electric whine of the minigun's motor. His weapons are disabled via Faxx's remote control. The relief lasts for about two seconds, until RoboCop 2 grabs the remote control in his huge claw-like hand, arms himself, then crushes the remote. All Hell breaks loose as people are shot down and cops are slaughtered en masse, and Robocop opens up with the assault cannon, but the rounds bounce off his massive armored torso. After dealing some limited damage to each other, the two cyborgs find themselves atop the Civic Center roof, clinging on to the cladding above the huge drop to ground level. RoboCop, knowing both that disabling RoboCop 2 is paramount and that he can probably simply be put back together, forces them both off. They plummet to the ground, through the tarmac, and crash to a stop in a basement full of services. The fight restarts down there, but Robocop forces RoboCop 2's welding arm through a gas main, which explodes violently, but is ineffective at stopping RoboCop 2.

Back on street level, the battle intensifies, and so does the bodycount, as neither the police, nor OCP's personal security are able to stop the monstrosity. Reporters and public citizens are cut down and blown to pieces, swathes of officers catch bullets and shrapnel. Lewis manages to temporarily silence him by piledriving the machine into a wall with an APC, but the silence lasts only seconds and soon RoboCop 2 is up, still full of fight and ready to resume the carnage. RoboCop devises an idea: have Lewis create a diversion by offering RoboCop 2 the canister of Nuke while RoboCop goes for RoboCop 2. The plan succeeds, and whilst RoboCop 2 is basking him the pleasure of his fix, RoboCop leaps onto his back, first shooting away at the armored clasps on his torso, then tearing into it with his hands. Finally, RoboCop tears out the container containing the cyborg's brain and smashes it into the pavement. He then crushes the remains with his fists, ending the onslaught and, finally, what little is left of the former drug dealer's life.

At some point following the incident at the Civic Center and prior to the takeover of OCP by the Kanemitsu Corporation, RoboCop 2 was repaired. While investigating a steel mill during the attempts of Skynet to protect the RoboCop Program from the Human Resistance, RoboCop would encounter RoboCop 2 protecting a gang that had taken over the steel mill. RoboCop was able to defeat his adversary once again. 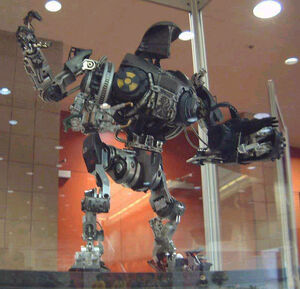 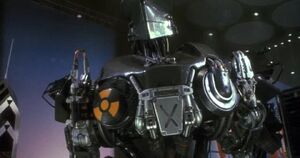 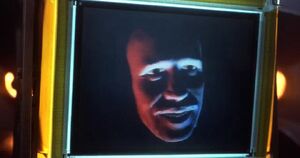 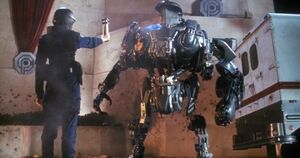 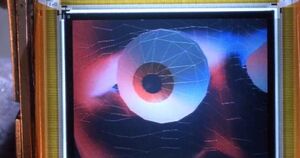 Cain is shocked as RoboCop prepares to destroy his brain 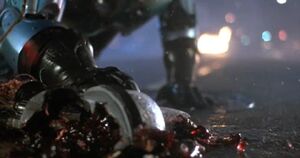 RoboCop crushing Cain's brain after removing it from RoboCop 2 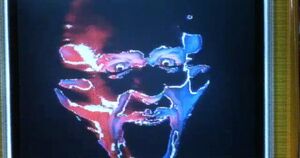 Cain malfunctions and dies on-screen after having his brain destroyed 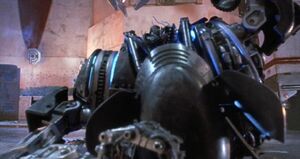 The metal structure of RoboCop 2 collapses 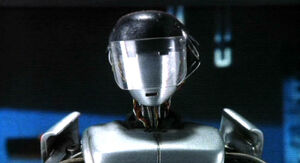 2nd attempt at the creation of RoboCop 2 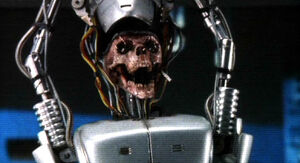