Terrorizing Riverton and its citizens.

RoboGadget is a major antagonist of the 1999 Disney science fiction film Inspector Gadget. He was a complete robotic duplicate of Gadget, created by Dr. Claw from his original prototype android "Prometheus".

He was portrayed by Matthew Broderick, who also played Inspector Gadget in the same film, and later portrayed Baron Triumph in Daybreak.

RoboGadget looks very identical to Inspector Gadget, but with fake teeth and a gold clip-on tie with a black stripe in the center.

RoboGadget was created by Sanford Scolex (also known as Dr. Claw) to terrorize the city of Riverton to ruin the real Inspector Gadget's reputation and kill him. He was created by stealing Dr. Brenda Bradford's research from the Gadget program after romantically making her join Scolex Industries.

In the film, RoboGadget has been sent by Dr. Claw to terrorize and eventually destroy the town of Riverton. He is programmed by him in the lab as he explains he has been created by one of the most brilliant technologies in the world, then asks him what he intends to do. RoboGadget replies that he is going to "kick some butt". When Sykes tries to get a close look at him, RoboGadget whacks his face with his robotic hand.

He is then seen walking innocently on the streets when a boy asks for his autograph, thinking he is the real Gadget. RoboGadget scares him away with sharp needles, flamethrowers, and bazookas poking behind him, all for a cost of money. He then brings an exhaust engine out of his hat and burns a public sign, laughing hysterically.

He creates absolute destruction by burning a pile of cars, assaulting neighborhoods, civilians, and even the Riverton Police Department. He was almost about to kill the Chief of Police, Quimby, but several officers prevented him from doing so.

He joins Claw for the enjoyment of watching Inspector Gadget fail, only to engage him once he finds out he is alive. When Gadget catches up to Claw in his limousine, he orders him and RoboGadget under arrest, with RoboGadget receiving the charge of "impersonating a police officer". RoboGadget punches him out the window but he comes back again.

RoboGadget then engages Gadget in a duel on the Riverton Bridge, first by forcing him to dance through gunfire, then battling him in the gadget to gadget combat on one of the bridge's towers. After Gadget sprays his imposter with toothpaste, he goes head-on with his hand-scimitars and manages to make him dangle for his life, grabbing Robo's clip-on tie. Of course, RoboGadget goes down with when he pulls his pants down. In order to make him fall for sure, he has a tarantula come out of his mouth and force him to lose his grip.

The Gadgets fall as expected but land on shopping carts that spin around before crashing into a truck. The RoboGadget bangs the real Gadget's head with his mallets before he has his head removed by the Inspector. He offers Gadget a chance to join him and be partners in a world where only robots will exist. Gadget refuses and RoboGadget's head is thrown into a river and it presumably drowns while his body runs away trying to find it.

During the end credits, RoboGadget's body is shown still running around and it finally bumps into the camera.

Unlike the good Gadget, RoboGadget was incredibly manipulative, sinister, evil and vicious, being created to lay waste on Riverton while serving as a new minion to Claw. He is extremely destructive when he tries to ruin Inspector Gadget's reputation.

Despite the difference between him and Gadget's personalities, RoboGadget does have the original's ability to extend his limbs. 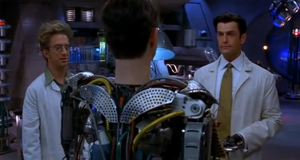 RoboGadget introduced as a brand-new model to Claw 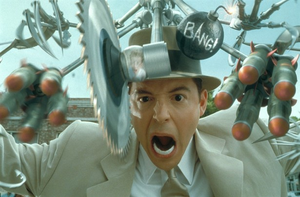 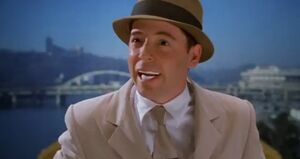 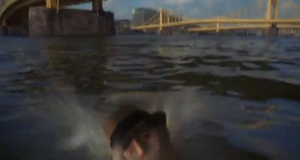 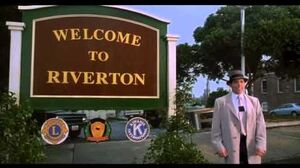 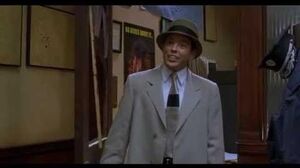 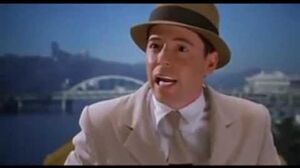